Walking Off Birthright? Check Your Privilege 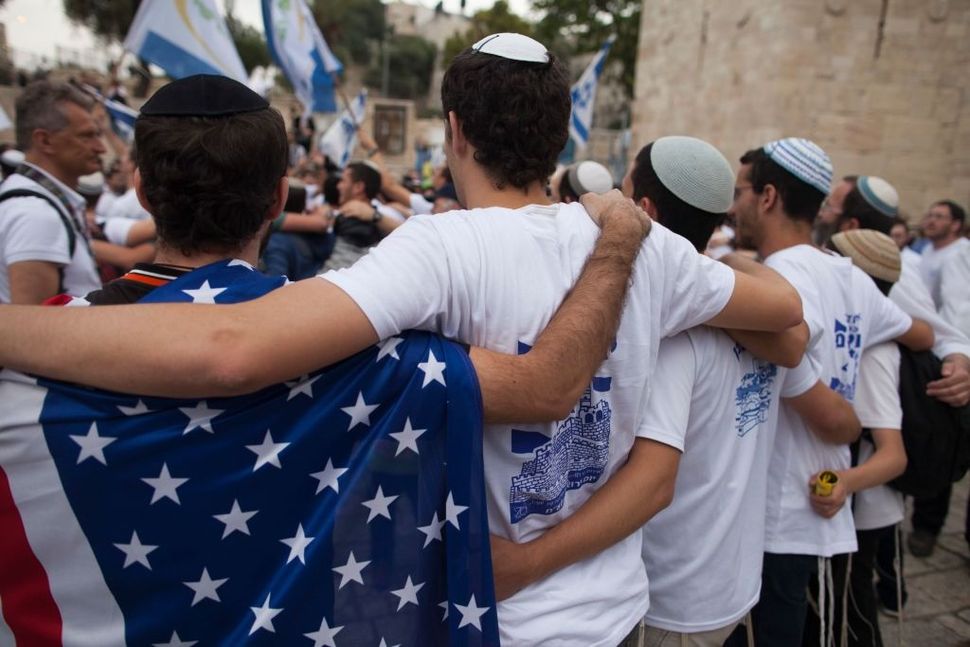 A man wearing an American flag dance during a flags march outside Damascus Gate on May 13, 2018 in Jerusalem, Israel. Israel mark Jerusalem Day celebrations the 51th anniversary of its capture of Arab east Jerusalem in the Six Day War of 1967. One day before US will move the Embassy to Jerusalem Image by Getty Images

The activist group IfNotNow has a webpage devoted to arranging disruptions of Birthright trips. At notjustafreetrip.com you can sign up with them if you’re attending a Birthright trip and fill out a form letting them know what kind of support you need.

One of the options is, “I want to take action on my trip.”

So let’s lay to rest the idea that when an IfNotNow member is kicked off a Birthright trip, or leaves one after a filmed speech, it’s a spontaneous act.

By now, these disruptions are famous. 13 people walked off their Birthright trips last summer, and three were just asked to leave thanks to a new clause in Birthright’s Code of Conduct specifying what it expects from its participants.

And that is totally fair.

Birthright — like Israel — does not just exist for Americans to debate it or its actions. It’s an amazing opportunity for Jewish youth who lack the funds to visit a country with undeniable ties to their Judaism.

My mother has never had the ability to pray at the Western Wall or climb to the top of Mount Masada. She fears she’ll never be able to. But for young Jewish people, Birthright offers a chance to visit the holiest sites in their religion.

Whether or not you disagree with the politics of the country those sites are in, doing this for free is a privilege. So is visiting China, even if you don’t go to Tibet, or Turkey, even if they don’t discuss the Armenian genocide. (I wouldn’t expect them to or take their money.)

Everyone knows the meaning of a Birthright tour; it’s a PR trip paid for by Jewish billionaires as well as the Israeli government and its citizens. It’s meant for Americans to visit the country and gain positive memories there.

As an editorial writer, I’ve been on PR trips before. They are always an exchange: You exchange food, lodging, airfare and tourism for positive press about the destination. Recently, I visited Puerto Rico. If I knew, going in, that I disagreed with Puerto Rico’s right to exist and despised the tourism board paying for my plane ticket, I would never sign up. I’d let someone else who writes for my publication take that slot.

Why? Because I don’t take money from people who go against my values.

I don’t have the money to hijack a gift and make it on my own in a foreign land. At a time when synagogues have extremely expensive membership rates and Hebrew schools are looking more and more like pricey bar mitzvah factories, Birthright is one of the few socio-economically inclusive outlets for American Jews, something someone like me values deeply.

Apparently, the activists who hijack Birthright and get kicked off do not.

When told by the Birthright administrators if they walked off the trip, they might have to pay for their airfare home, the If Not Now activists waved the expense off as no problem. They never needed this trip. To them, it was nothing more than a chance to make a political statement.

Unlike the other kids waiting on the tour bus while they throw a staged hissy fit, these protesters know a lot about privilege.

Despite their right to ban debate, the truth is that political statements are not forbidden on a Birthright trip. When I attended in 2014, I had countless debates with my fellow travelers and Israeli soldiers about the occupation. They were heated. But they were also followed with visits to the dead sea and eating shakshuka, which was why we were really there.

If you’d like to visit Israel solely to discuss the conflict, there are options for you. If Tamika Mallory can find a tour of Israel that works for her, so can a Jew who disapproves of its politics. Birthwrong offers trips focusing on Jewish culture in places outside of Israel. Green Olive Tours offer in-depth excursions on Israel, Palestine and the West Bank. There even are Birthleft tours of the West Bank and East Jerusalem, which these protesters joined. Before deciding to leave, they noted they had a contact already set up with Birthleft; they obviously planned to join that tour before registering for their original excursion. They just used Birthright funds to get to it.

It’s wrong to hijack a spiritual journey for others to meet your own political goals. All Birthright trips offer the opportunity for travelers to extend their stay by giving them a ticket home whenever they wanted. Even IfNotNow notes this is an option.

I know people who have visited Jordan, Syria, occupied territories and Europe using this option. These protesters could have visited East Jerusalem once the planned tour was over, even spending a month there talking to Palestinians, something probably not beyond the pale for them economically, given they’re able to buy a last minute ticket back to the States from the Middle East.

But they aren’t interested in making a Birthright trip work for them or finding a better option. They signed up to hijack, steal Israeli dollars and Livestream themselves pretending to be the white saviors of the Palestinian people.

IfNotNow seeks to transform how American Jews think about opposing the Israeli government, but their staged protest had the opposite effect. These kids look like entitled brats who took money from Jewish foundations in bad faith. They didn’t care about the kids who went on the trip as their peers.

During another staged walkout last week, when other students, who had been trapped in a bus for hours, told the protesters that they didn’t consent to be filmed, they kept filming and then read a speech they’d written in advance.

“Starting when we got here on our first trip, Maxi introduced us this trip as a gift,” a protester read to a bus that had been forced to wait while they taped their stunt.

“It is, because you didn’t pay for it,” interrupted a fellow Birthright participant.

As the activist went through her talking points and how the trip didn’t suit her for the cameras, the bus got increasingly irritated, with others piping up and saying, “We know, we were there.” The audience then continued to laugh during the self-aggrandizing speech.

If the people doing Birthright walkouts are looking to get more Jews to stand up for Palestinian rights, they are failing. These aren’t rogue thoughtful kids standing up for their values. They are wealthy dissenters proving they have none.

There is nothing wrong with protesting the occupation or speaking out against the current Israel government; in fact, there is plenty of reason to do so.

But taking someone else’s money for a free trip, seeing its itinerary, then demanding the voyage fit your political perspective on someone else’s dime, isn’t protest. It’s entitlement.

Walking Off Birthright? Check Your Privilege