After Getting Kicked Off Birthright, Trio Regroups In West Bank 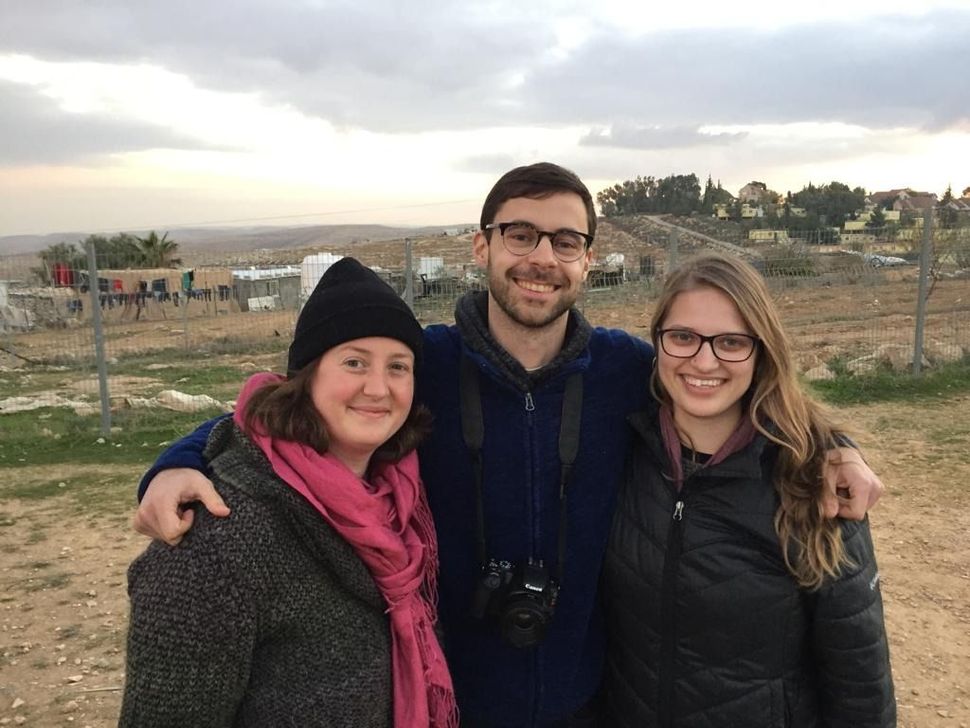 Shira Tiffany, Benjamin Doernberg, and Emily Bloch, in Umm al Khair, a Palestinian village in the South Hebron Hills that has been under demolition orders from the Israeli government for years. All three were asked to leave their Birthright trip. Image by Courtesy of the author

A day after being kicked off a Birthright Israel trip, three young American Jews went to the exact place Birthright would never take them: the West Bank.

They are meeting with residents of a Bedouin village to ask them about living under Israel’s occupation of the territory, Emily Bloch said. Bloch, 29, along with Shira Tiffany, 29, and Benjamin Doernberg, 29, were dismissed from their Birthright trip Sunday.

“We’re just figuring stuff out,” Bloch said. “We didn’t have any plans because we weren’t planning to get kicked off.”

The trio were asked to leave their trip after what Bloch described as a “pretty heated discussion” occurred between her and an Israeli tour guide leading the trip after Bloch asked about the wall that separates Jerusalem from the West Bank. Bloch said she asked about the wall because she is an immigrants’ rights activist in Boston.

The trio were then taken to a Birthright office in Tel Aviv, where they were told they could either go immediately to the airport and fly home, or stay on their own dime, and forfeit their flight home and $250 security deposit.

“I felt like I hadn’t gotten what I’d come here for, so I decided to stay and learn more,” Bloch said.

Bloch said that Birthright staff did not specifically tell them why they were being kicked off the trip, only saying that they had broken the program’s “rules and regulations.” Bloch said she took that to mean that they had infringed recently added language in Birthright’s code of conduct, which includes a ban on “hijack[ing] discussion.”

“They’re drawing the line, that if you want to ask questions about the occupation, you’re not welcome anymore,” Bloch said.

In a statement, Birthright called the trio “activists,” and said that the organization has a policy of asking participants to leave when they “disrupt the experience of other participants.”

“Birthright Israel always welcomes participants’ views and questions, which are essential to the success of the experience, so long as they are shared in a constructive and respectful manner,” the statement read. “We will not condone any coordinated plans to ruin the experience for others in order to promote a specific agenda.”

Birthright did not immediately respond to further questions asked by the Forward.

After being asked to leave, Bloch said that she, Doernberg and Tiffany stayed at a friend’s home in Tel Aviv, before going to the West Bank Monday morning. They are visiting Umm al-Khair, a Bedouin village near Hebron, which has seen tent homes demolished by the Israeli government.

Bloch says that the trio are self-funded, and may start a GoFundMe campaign to raise money for their travel expenses and flights back to the U.S., as several Birthright participants who were kicked off their trips in August did.

Bloch said that tonight they are staying with an acquaintance in Jerusalem.

“A lot of people have reached out over social media and offered us places to stay, and connections,” she said.

Tomorrow they are planning to go see a main checkpoint between Israel and the West Bank.

“The checkpoint is the gate of the border wall,” Bloch said. “That’s where I think you can often see a lot of what it’s like to live separated, on either side of the wall.”

Bloch said she was disappointed to be kicked off the trip. She said she had previously tried to go on a Birthright trip, in 2014, before it was cancelled because of Israel’s war with Gaza that year, and this is her first time in Israel.

“I wanted to see Israel with my own eyes,” she said. Birthright “is the opportunity presented to so many people in our generation as the way to do that.”

But, she said, they’re not helping American Jews have a “complex and nuanced relationship with Israel.”

“They want unwavering support for their political agenda,” she said.

After Getting Kicked Off Birthright, Trio Regroups In West Bank