Birthright Will Fail If It Doesn’t Evolve With Young Jews 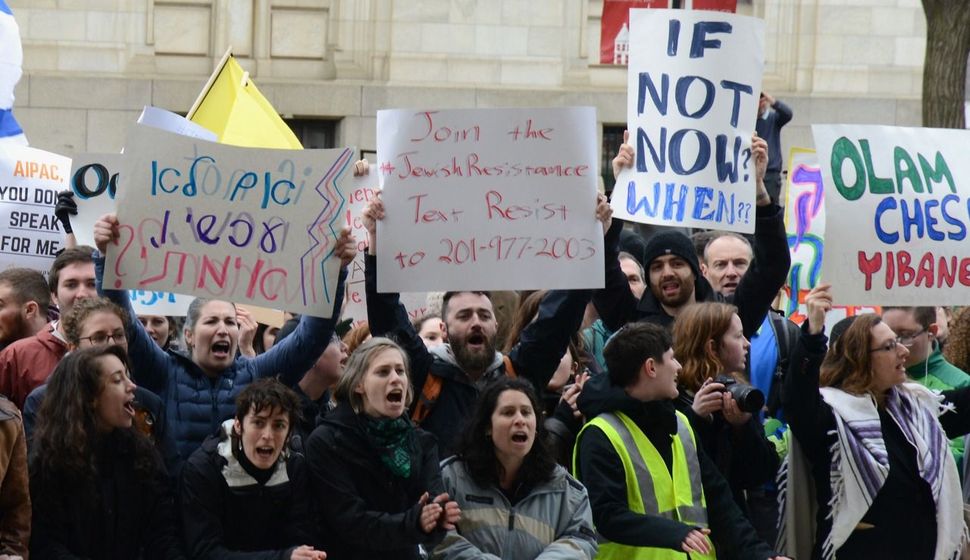 On New Year’s Day, a young woman rushed the stage at the “MegaEvent” held in Jerusalem for participants in Birthright, the program that takes young American and other Diaspora Jews to Israel on a free ten-day trip.

She unfurled a banner that declared “Birthright Sponsored by Adelson, Trump, Netanyahu” and directed viewers to CostofBirthright.Com, a website sponsored by the anti-occupation Jewish group, If Not Now. Then she was hustled off stage

It’s the new normal. Since June, 22 Diaspora Jews have either walked off Birthright trips in protest against their tour guide’s refusal to take them to meet Palestinians or been kicked off for raising uncomfortable questions about Israeli policy. And If Not Now activists and members of Na’amod, a similar group in Britain, have distributed anti-occupation literature to people about to embark on Birthright trips at airports.

All this is both necessary and tragic.

It is necessary because taking Diaspora Jews to Israel without giving them the chance to hear from Palestinians who live as non-citizens under Israeli control in the West Bank is dishonest and immoral. It’s like organizing a tour to America in the 1950s without introducing participants to blacks in the segregated south.

Birthright’s defenders may argue that the trip isn’t about the Israeli-Palestinian conflict, that it’s about using Israel to foster Jewish identity. But Jewish identity is itself inextricably bound up with the way Jews treat the strangers in their midst. The Torah makes that point 36 times.

For several decades now, non-Orthodox American Jews have been conducting a mass experiment. They have raised children radically ignorant of Jewish texts and tradition in a country that offers Jews radical acceptance. The result: Radical assimilation. What’s heartbreaking isn’t that young American Jews choose to assimilate. It’s that many can’t even make an informed choice because they don’t know enough about Judaism to know what they’re giving up.

Birthright is an answer to that. It’s not the only—or even the best—answer. If I had a billion dollars, I’d create state of the art, low-cost, Jewish camps and day schools.

But Birthright is a good answer. It’s a good answer because going to Israel—and experiencing a Jewish society in the land where Jewish history was born—can be life-transforming. It offers young American Jews a glimpse of the beauty and grandeur of Jewish tradition. It helps them appreciate what they have inherited as they begin thinking about what they want to hand down.

Ideally, Birthright would thrive. But it can’t thrive if it makes moral blindness the price of Jewish connection.

Birthright faces largely the same dilemma as another institution designed to connect young American Jews to Judaism: Hillel, the Jewish campus organization. Both claim to be apolitical. Both define “apolitical” as shutting out Palestinian voices, Birthright by rarely including Palestinians on its tours, Hillel by only permitting Zionists to speak at its events.

The problem is that talking about Israel without listening to Palestinians is intensely political.

If Birthright continues on its current path, fewer and fewer liberal Jews will go. Its clientele will become less and less representative of young American Jews as a whole. And it will increasingly fail to fulfill a mission we should want to succeed.

The alternative is simple: Take Birthright kids to meet Palestinians in the West Bank.

From a security perspective, that’s eminently doable. With less money, organizations like Breaking the Silence, Encounter and Extend run such trips all the time. While they’re at it, participants can meet settlers too. Birthright should let settlers explain why they enjoy swimming pools and irrigated lawns while the Palestinians down the road make do with a few hours of water per day.

This kind of intellectual and moral glasnost would mostly end the protests that are currently plaguing Birthright. It would help sustain its future as an institution that serves American Jewish kids irrespective of political belief.

So why doesn’t Birthright do it?

Because it’s more afraid of alienating racist donors like Sheldon Adelson and the Israeli government than alienating the young people it’s meant to serve.

Some Birthright officials may also feel that if young American Jews encounter Palestinians, it will undermine their connection to Israel and Judaism. But that’s wrong. It will simply change the nature of that connection.

Instead of seeing Israel as a Jewish Disneyland, young American Jews will see it as a country—like their own—that is both precious and in urgent need of moral repair.

What could be a more authentic way to experience Israel, whose very name means not adoration or reverence but struggle.

Young American Jews are ready for that struggle. In fact, they are demanding it. Birthright’s future will rest, in large measure, on whether it is ready too.

Birthright Will Fail If It Doesn’t Evolve With Young Jews