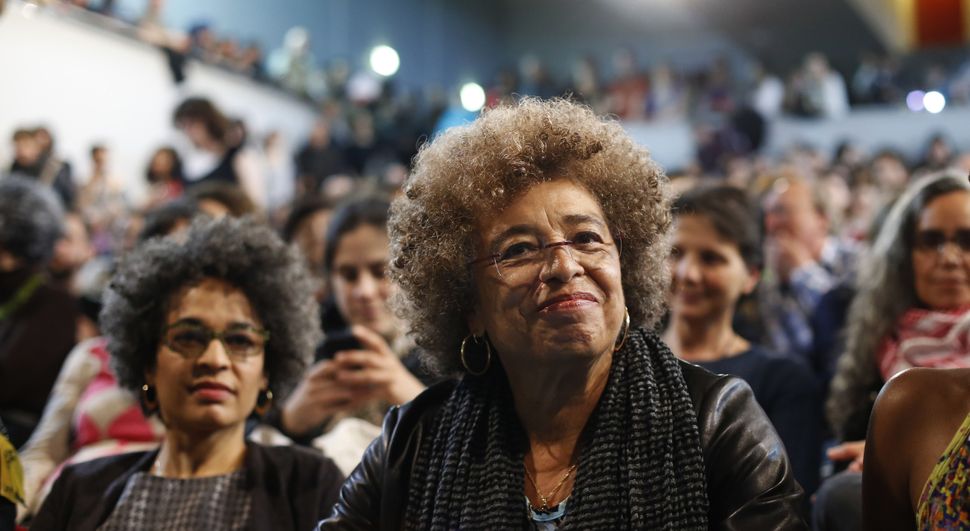 The Birmingham Civil Rights Institute, the Alabama museum and research center dedicated to the history of the Civil Rights Movement, has rescinded a prestigious award to activist, academic and Birmingham native Angela Davis, canceling the February gala at which it was to be presented. The news has sparked protests, and Birmingham mayorRandall Woodfin and the Alabama State Conference of the NAACP have urged the institute to reconsider.

Since the decision was reportedly caused by objections to Davis’s strong support for the boycott, divestment, and sanctions movement targeting Israel, it is likely to add to already-simmering tensions between black activists and the Jewish community.

But progressives dismayed by the un-honoring of Davis would do well to rethink their position. Quite apart from her stance toward Israel—which includes the embrace of convicted terrorists Rasmea Odeh and Marwan Barghouti—Davis has a history that makes her a very dubious candidate for a human rights award.

Davis, who turns 75 later this month, has often been called a civil rights icon (indeed, the now-canceled event honoring her was titled “A Civil Rights Icon Returns”). But while she was involved in the civil rights movement as a teenager, she became an icon much later—in 1970, as a black militant facing murder charges for her alleged role in a violent attack in a California courtroom.

By then, Davis, a former University of California professor who had studied with the radical philosopher Herbert Marcuse in Europe, was a card-carrying Communist and a supporter of the Black Panther party. She was accused of helping engineer a hostage-taking in a California courtroom intended to free three Black Panthers accused of killing a white prison guard. Davis had bought several of the firearms used in the attack, in which the judge and the three defendants were killed and several other people were injured.

Arrested after several months as a fugitive, Davis gained international fame and was widely seen as a political prisoner. John Lennon and Yoko Ono wrote a song about her; so did the Rolling Stones. Her supporters included progressive churches and some wealthy businesspeople. In 1972, she was acquitted by a sympathetic all-white jury.

Davis has always insisted upon her total innocence in the courtroom attack. But there is no doubt about her links to the Black Panthers, a group that, despite recent attempts to romanticize it, was responsible for some horrific violence—often against its own members who were accused of betrayal or got caught up in factional conflicts. In a speech at a Black Panther rally in Oakland, California in November 1969, Davis reminds the crowd that the “sisters and brothers in Connecticut are still in jail.”

This is a reference to the Black Panthers arrested for the murder of 19-year-old Alex Rackley, who had joined the party several months earlier and was (wrongly) suspected of being an FBI informant; he was shot dead after three days of beatings and torture that included being scalded with boiling water.

One could say that the Panthers’ violence took place in the context of fighting back against brutal racial oppression that the nation had barely begun to dismantle. But that does not excuse their own brutality, often against victims who were among the most vulnerable and disadvantaged.

In the years that followed, Davis was also a strong ally of Jim Jones’s Jonestown commune in Guyana, which ended in the infamous mass suicide by poisoned Kool-Aid. But perhaps the most shameful part of her career is her consistent stance as a supporter of, and apologist for, repressive Communist states.

Davis had visited East Berlin and Cuba in the late 1960s and had come to admire those regimes. During her imprisonment, she became a political celebrity in the Soviet bloc; communist states that faced frequent international criticism for imprisoning dissenters got a lot of propaganda mileage out of championing a reputed political prisoner in the United States. Upon her release, Davis traveled to East Germany, Cuba, and the USSR to a hero’s welcome; she received honorary degrees, awards, medals, and prizes, and gave speeches praising her hosts.

On her trip to East Germany, Davis visited the Berlin Wall, where 262 people were killed trying to escape from communist paradise to capitalist hell. A 1972 photo shows her glowing as she shakes hands with Erich Honecker, the General Secretary of the East German Communist Party who gave orders to shoot at escapees.

The same year, Czech journalist Jiri Pelikan, who had been active in the “Prague Spring” reforms and had to emigrate after the 1968 Soviet invasion, wrote Davis an open letter expressing sympathy with her experience as a prisoner and asking her call for the release of political prisoners in Eastern Europe (including Czech dissidents who, like himself, were believers in a more humane communism).

Davis’s friend and spokeswoman Charlene Mitchell told the press that Davis was not going to respond, since she “did not think people should leave socialist countries to return to the capitalist system.” She also said on Davis’s behalf that people in Eastern Europe were only jailed “if they were undermining the government.”

In 1980 and 1984, Davis ran as the vice-presidential candidate on the ticket of the Communist Party USA, a wholly owned subsidiary of the Kremlin. She only left the party in 1991 when the Soviet Union was about to collapse.

When it came to communist regimes, Davis also showed a notable lack of concern for the causes she has championed in the United States, such as gay rights and women’s rights. She was nowhere to be heard when several women who launched an underground feminist publication “Women and Russia”—which challenged official claims of gender equality in the USSR—were jailed or forced to emigrate.

She never raised her voice against Soviet laws criminalizing male homosexuality (which, unlike rarely enforced sodomy laws in the United States of that era, resulted in the imprisonment of thousands), or against brutal anti-gay repressions in Fidel Castro’s Cuba. And to this day, she has never voiced regret about her alliance with totalitarian regimes.

In its statement rescinding the Fred Shuttleworth Human Rights Award to Davis, the BCRI said that she “does not meet all of the criteria on which the award is based.” It is unclear to what specifically this explanation refers. But given that the award is meant to “recognize individuals for their service to civil and human rights causes around the world,” the decision seems right.