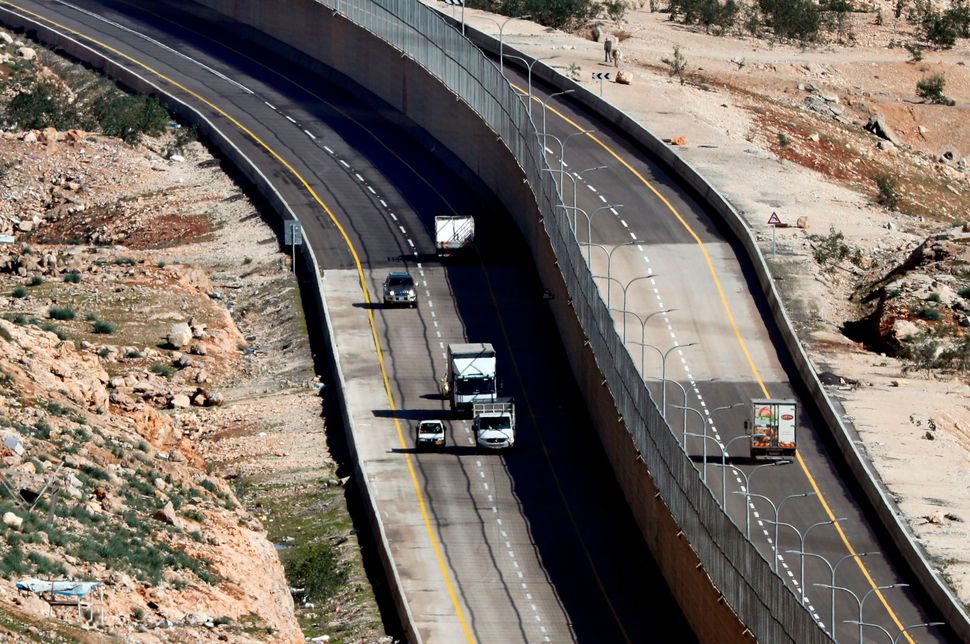 Entering Jerusalem from the Shomron area in the West Bank this morning, my navigation system took me on a new path that I had never driven down before. Although new to me, this road has been getting a lot of media attention, dubbed by some as “the Apartheid road” because it runs side by side with another road, separated by a wall.

The street I drove down ends with a security check for Israeli citizens entering Jerusalem, and the other is a road for Palestinians moving around inside the West Bank. This separation is another manifestation of the wall that separates the West Bank from the rest of Israel.

And I, a settler, am opposed to these separations.

Influential visitors to Israel are often invited to take part in tours of the separation barrier. These visits are accompanied by elaborate briefings with self-described “security experts,” who talk at length about the existential need for the barrier.

They typically explain how Israeli cities faced an onslaught of Palestinian homicide bombers from the West Bank during the Second Intifada, from 2000-2005. The vicious and relentless attacks caused thousands of Israeli casualties and seemed at the time to threaten Israel’s very future.

With the nation traumatized, a decision was made on the basis of broad political and security consensus — or so goes the narrative — to construct the barrier, which dramatically decreased Palestinian terror attacks, seemingly justifying its necessity.

At the time of its construction, politicians declared that the barrier, which is more of a fence, was meant to be a temporary measure. Now, a decade after the trend of suicide bombings has passed, the barrier seems to have become a permanent fixture on our terrain.

“Israel must defend herself,” the “experts” inevitably say. “We have no choice. We must separate ourselves from the threat of violence.”

I can tell you that as a settler who lives side by side with my Palestinian neighbors, this narrative is manipulative and false.

What’s more, the narrative justifying the barrier distorts the options for reducing the friction between Jews and Arabs, and improving the quality of life for all the residents of this land.

In the briefings, the barrier’s proponents show us figures purporting to prove the necessity of the wall and the drop in violence since its construction. What these “experts” make it a point not to tell you is that hundreds of thousands of Israelis live in towns and cities on the east side of the barrier — in other words, outside of its protection.

You know what else they conveniently leave out? The same statistics showing a decline of terror attacks west of the barrier, in Israel proper, hold fast on east side as well, where I live with hundreds and thousands of other Jews, without a wall separating me from my Arab neighbors.

If the attacks against Israelis have dropped on both sides of the barrier at comparable levels, it logically follows that the barrier itself does not explain the decline in attacks.

Clearly, the drop in violence is the result of a range of factors, starting with changes in the tactics of the Israeli security forces, as well as massive military operations which uprooted the Palestinian terror infrastructure for a generation. One must also factor in the successful and ongoing intelligence and tactical efforts which deny terrorists the tools and opportunity to do harm.

The security barrier is thus no such thing. Neither its construction nor its ongoing presence can be justified by the security argument.

Its real purpose is indeed something entirely different: to provide a pseudo-political or psychological boundary behind which Israel could theoretically withdraw. The seeming permanence of this significant feat of engineering helps to shape a political reality of separation from the Palestinians, which some in Israel desperately wish to achieve.

This is incredibly problematic. We know that Israel will never relinquish security control of the Jordan Valley, or deny security forces the freedom to operate in the West Bank when the need arises. This means that under any hypothetical peace agreement, the security situation would not really change. And as we see in the situation with Gaza, the barrier does not solve the security problem of rockets, mortars, tunnels, ladders, gliders, UAV’s, incendiary balloons, and all the other creative means of attack that terrorists have come up with.

Another argument one hears is that the barrier helps Israel control the access Palestinians who live in the West Bank have to Israel, especially for the purposes of work and tourism. But this, too, is a facetious claim.

Chronic macroeconomic mismanagement by the Palestinian Authority and rampant cronyism and corruption creates a situation whereby Israel regularly chooses to extend a large number of work permits to Palestinian residents of the West Bank in order to provide employment and ensure stability there. So it’s not clear what purpose controlling the entry points for these workers serves. Illegal employment could be addressed at the level of the tax authority or through business regulation.

The final argument one hears from the experts in support of the barrier is that is has reduced crime, in particular, car theft. Well, you’ve got me there. According to experts in vehicle security and tracking, it does seem to be accomplishing this goal, and if they had sold this massive, expensive project, then or now, on the basis of protecting the Israeli car insurance industry or lowering theft premiums, I would have to admit that the project succeeded.

Leftists complain that the “Apartheid Wall” separates Jews from Arabs, and thus must be torn down.

They are wrong. There are very large numbers of both Jews and Arabs living on either side of the barrier. My own family and community resides about 16 miles east of the barrier. It certainly offers us no “security” benefit.

In fact, just the opposite is true: I have less trouble visiting my Arab neighbors than any Israeli wishing to do so in Tel Aviv.

David Ha’ivri is an Assemblyman on Shomron Regional Council. He specializes in international affairs and government relations. He is an inspirational speaker and a social media personality.