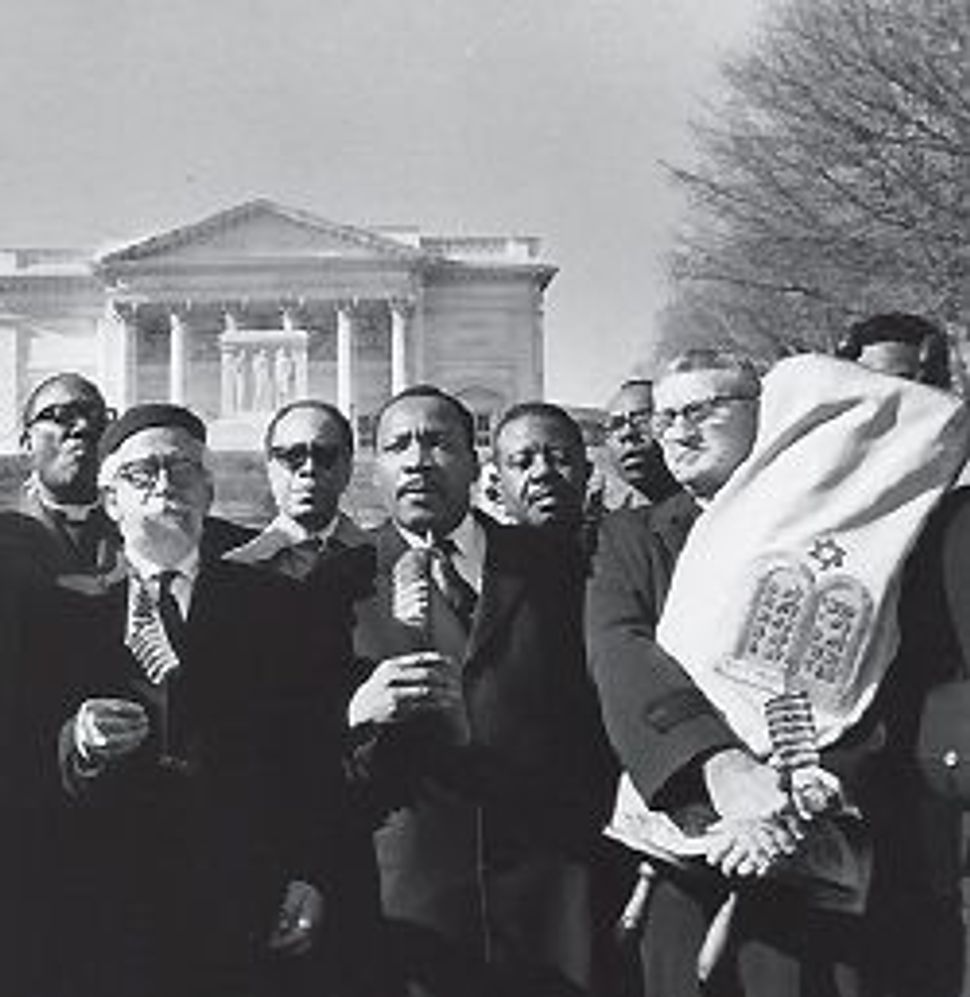 In the Fight: Abraham Joshua Heschel (center left) joins with Martin Luther King in 1968, at one of many joint appearances. Image by Getty Images

When it comes to issues of race and racism, we live in tumultuous, conflict-ridden times. Often in the media and sometimes in our daily lives, we don’t see positive examples of cross-racial or cross-cultural solidarity. So it’s understandable that we would highlight the positive examples of this solidarity when we’re given the opportunity to do so.

Rabbi Abraham Joshua Heschel’s iconic partnership with Martin Luther King Jr. is an example of one of those positive representations of cross-racial and cross-cultural solidarity. His radical activism during the Civil Rights Movement is deeply inspiring and admirable. Even outside of his connection to Martin Luther King Jr., Rabbi Heschel is a fascinating figure in Jewish history.

But increasingly, when Rabbi Heschel’s name is invoked in predominantly white Jewish spaces — or on Martin Luther King Jr. Day — the end result doesn’t always feel positive. Often, for people of color, it can serve an insidious and frustrating purpose.

In fact, his legacy is all too often invoked as a cudgel to silence criticism coming from people of color and Jews of color; we are not infrequently told to remember the debt we owe the Jewish community during the Civil Rights era.

I love learning about Rabbi Heschel and the brave Jewish men and women who fought in the Civil Rights movement. But I hate comments like these. These comments are not meant to build solidarity or to exchange historical knowledge with black people. They’re meant to silence black people, obfuscate legitimate concerns about anti-blackness, and to blame experiences of racism on the people who experience that racism.

Moreover, these comments are often ahistorical, and they erase the people who the Civil Rights Movement was actually about: black people.

In her New York Times Bestselling book, “White Fragility: Why It’s So Hard For White People to Talk About Racism,” author Robin DiAngelo points out that saying things like “I marched in the sixties” in response to accusations of racism is a racist micro-aggression weaponized against people of color. According to DiAngelo, such statements are problematic because they assume that racism is a “simple matter of racial intolerance” and that “no racism — even unconsciously — was perpetrated toward blacks by well-meaning whites during the civil rights movement.”

Comments about Rabbi Heschel and Martin Luther King Jr. serve the same function. So do comments like “How can you say that there is racism in the Jewish community? Jews fought side-by-side with blacks for civil rights!”

Comments like these erase the existence of Jews of Color, who certainly fought for their own rights. These comments also betray a problematic belief that anti-racist credentials can be earned from historical figures and not current actions, or that one or two acts of racial solidarity transform one into a non-racist.

By this logic, my advocacy for transgender rights would mean that I am a near-perfect ally to the trans community. But I know for a fact that I am not, and that actively resisting transphobia is a lifelong endeavor for me and for all cisgender people. I cannot rid myself of that duty with one march, and I cannot silence concerns about my transphobia by presenting the offended party with the receipt of my donation to a trans-advocacy organization.

It’s true that Jews cared a lot about civil rights, and were twice as likely as Protestants to consider racial injustice the most important question facing America at that time. Jews also made up 30% of the white Freedom Riders. And two Jews were murdered standing up for civil rights — Andrew Goodman and Michael Schwerner.

But as Marc Dollinger writes in his book “Black Power, Jewish Politics: Reinventing the Alliance in the 1960s,” Southern Jews were mostly silent on civil rights, while most Northern Jews “experienced that movement from the safety and comfort of their living rooms, where they read about direct-action protests in the newspaper or watched it on television.”

The truth of the matter is that black people secured civil rights for themselves. They were the main beneficiaries of the movement, the main organizers of the movement, and it is black people who have carried the spirit of that movement into the 21st century. Suggesting otherwise as a means to silence or patronize black people attempts to rob us of agency in our own liberation movements.

It’s wrong to ask black people to treat white Jews as though they are their saviors. And the narrative of Jews as the selfless martyrs of the Civil Rights era stands to make Jews resentful when they are not treated as saviors by black people.

Thus, many felt anger and shock when the Anti-Defamation League was dropped from an anti-bias training at Starbucks after two black men were profiled there. Although the ADL has and continues to do important anti-bias work, it’s understandable that some black activists would object on the basis on the annual trips to Israel that the organization sponsors for US law enforcement to learn from and train with Israeli police and military officials. Demanding that black people put aside their concerns about this because the ADL is owed their support is bad form.

I am not telling you to not talk about Rabbi Heschel or Jewish involvement in the Civil Rights Movement today. I am asking you to be mindful of the emotional impact that has on the black people you know and care about.

You may be doing this in a way that bothers them deeply, and hopefully, you have a good enough relationship that you can have an honest conversation with them about it.

Rabbi Heschel and the rest of the brave Jewish men and women who worked for Civil Rights are worthy of our recognition. But we can honor them without erasing black people.

We can resist such extremes of emotion and thought, and represent the Black-Jewish alliance accurately while maintaining the agency of black Americans in their own social justice movements.