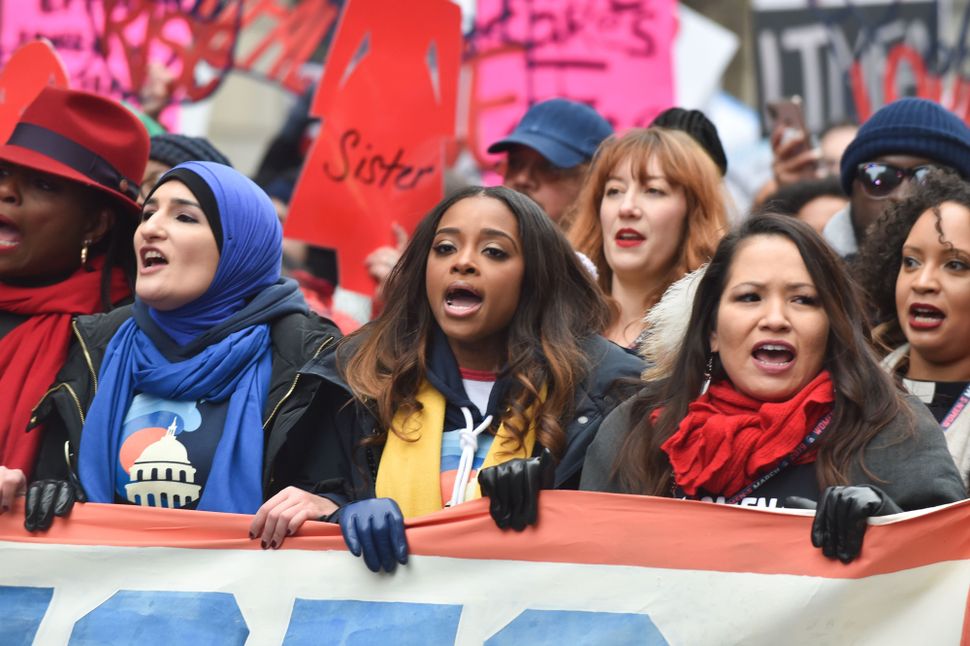 I agonized over what to write on my poster for the Women’s March this Saturday.

The past year has been a see-saw of Women’s March leaders claiming to stand against anti-Semitism and homophobia, then regularly promoting it.

They say they disagree with anti-Semitic and homophobic statements, but will not condemn them specifically. When asked about the controversies on media outlets, they frequently refuse to even say the words Jewish or LGBTQ. They post dog whistles about dual loyalties and that their critics are the same as Jesus’s. They explain eloquently that they choose to condemn bigotry (but not bigots), yet condemn Anti-Defamation League.

Every time I see progress, which they have demonstrated in some beautiful meaningful ways, it’s inevitably undone when they turn their backs on us in a slick, gaslighting “Gotcha!”

I am Jewish and queer. But neither of these identities managed to make an impact on the co-chairs of the Women’s March as I begged them, again and again, to take my pain seriously.

So as I sat down to write my sign, I wondered: Which part of my identity was left that might be potent enough to make a mark in a sea of social justice statements?

I know I shouldn’t have to peel off my skin to prove I am worthy of the advocacy of Tamika Mallory and Linda Sarsour and Bob Bland and Carmen Perez. But they have made it abundantly clear that I must pin my scars like dirty laundry on a clothesline, always asking, “Am I oppressed enough for their movement?”

With a quivering hand, I wrote on my sign, “Jewish Existence is Resistance.”

My grandmother survived Nazis in Auschwitz.
My mother fled Nazis in Colombia.
I fight Nazis in America. pic.twitter.com/JdjVaoNx65

I should not be alive. I’m a first generation American. My grandparents were enslaved in Auschwitz. My biological father was born on a displaced person’s camp for Holocaust survivors in Germany, a refugee.

I’m 23 years old. When my mother was my age, she was in Colombia and discovered the man who was housing her was a Nazi who put back on his old uniform once a month to salute Hitler with his wartime buddies. Her decision to flee for her life is the reason I have mine.

But it’s not just my history that my sign at the Women’s March was meant to convey.

As Jewish women approached me in the crowd thanking me for my sign, they knew that I was not just resisting a past that did everything it could to make me to disappear.

I was – and am — resisting the Women’s March.

The Women’s March, too, has tried to evict me from a movement that has given me a means of survival. For feminism has been my oxygen in a world that has tried to drown me.

It was the belief that I could ring in gender equality that helped me survive knowing my mother fled my father’s violent abuse when I was two years old. It kept me breathing when the courts forced me to have visitation with him and didn’t believe me when he abused me and my sister.

It wasn’t just my father. I was hit and sexually assaulted by boys before my bat mitzvah. My neighbors tried to drive my mother out of our neighborhood when they found out she didn’t have a husband, then spray painted “condemned house for sale” in front of our house.

Feminism allowed me to be fueled rather than fettered by these memories.

I bring up these things because the Women’s March makes me feel obligated to.

After weeks of claiming they were learning, inviting all women, even Jewish women to march, the leaders of the movement still treat White Jews like me as a privileged, problem child.

This weekend saw the publication of an article entitled “Attacks on the Women’s March Expose Race and Class Bias Among White Jews and Progressives.” It was written by Jodi Jacobson, who used to sit on the board of Megaphone Strategies, the Women’s March public relations company that sent emails to every journalist who shared the Tablet expose on the organization.

Here’s some of what Jacobson has to say:

“White Jews, of which I am one, too often see ‘anti-Semitism’ in what is really the legitimate anger and despair of Black people at being dehumanized and marginalized by a social and economic system made for and perpetuated by white people, of which Jewish Americans have, indisputably, become much more a part than Black Americans, anti-Semitism notwithstanding. The entire conversation has been turned from focusing on the most vulnerable, i.e. communities of color, to focusing on the angst of white Jews.”

The article paints white Jews as privileged. It excuses anti-Semitism. It reshapes a blatant denial of Jews’ humanity as “legitimate anger” against white supremacy, blaming us for our own violent victimization.

And Linda Sarsour shared it with effusive praise on Facebook.

What are we to make of this? The message is clear: The Women’s March has given up on trying to heal its relationship with the Jewish community at large.

Instead, with a new steering committee that has one transgender Jewish woman and two black Jewish women, they are writing a new narrative: We don’t have a problem with Jews! Just the white, cisgender ones!

I admire the new women who have joined the Women’s March team, but adding them less than a week before the march, as major sponsors ran for the hills, felt performative, an opera of tokenism laced with a conscious decision to divide the Jewish community.

In reporting the controversy for over a year and being confronted with people who have attacked me with some of the most brutal anti-Semitism I’ve faced in years, I never cried.

But on the way home from the march, when I saw Sarsour fundamentally discard all of the traumas I’ve faced and try to weaponize my community against itself in a single post, I sobbed.

The greatest pain of the Women’s March controversy is not the anti-Semitism. It’s the painful internal schism it amplified, the raw division between Jews of color and white Jews.

For Jews of color, those divisions have always been there. There are some vile Jewish racists that must be denounced and forced to eat bitter herbs for eternity.

But the Women’s March is looking to paint white Jewish women at large in a broad and anti-Semitic brush.

Their message, especially as articulated in Jacobson’s article, is that there is a place for Jewish women, but only those who are marginalized in other ways that the Women’s March deems worthy.

I interviewed forty Jewish women in the US and Canada about whether they would attend the march, including trans Jews, Jews of color and queer Jews. The only woman who came forward in my search who said she would march in any event associated with the Women’s March was Abby Stein, who is now on the steering committee.

Watching Sarsour, Mallory, Perez and Bland march behind a sign that says Jews of Color, I felt elated. Hearing the voices of so many in the #jwocmarching movement has been moving.

But I knew that photo op represented an active choice: The Women’s March cannot and will not support all Jews.

We are not deemed worthy of their advocacy. But those of us who check off their other boxes of oppression are welcome.

Intracommunity racism against Jews of color is a real, deep, international problem. It prevents black Jews from feeling safe in synagogues, keeps the oppression of Chinese Jews in Kaifeng unaddressed, ghettoizes Persian Jews, and causes harm that I, in this privileged body, will never understand.

But Women’s March Inc is exploiting the flaws of some white Jews to distract from their own anti-semitism.

Jewish women will survive this. We don’t need a march. Jewish existence is resistance.