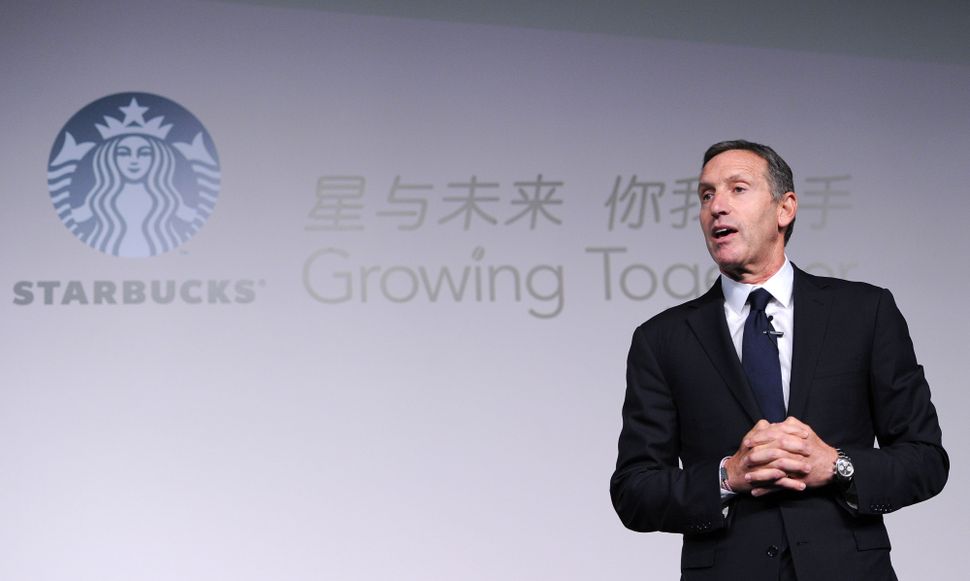 Howard Schultz, president and chief executive officer of Starbucks delivers his speech at the Starbucks Partner Family Forum in Beijing on April 18, 2012. China will become the company second largest market outside US by 2014, and to have over 1,500 stores across more than 70 cities by 2015. AFP PHOTO / LIU JIN (Photo credit should read LIU JIN/AFP/Getty Images) Image by Getty Images

As soon as former Starbucks CEO Howard Schultz tweeted his interest in running an independent, self-funded presidential campaign, the response was instantaneous — and bad. Schultz was dunked on by everyone from Bill Kristol to Julian Castro.

A surprising consensus formed across party lines as political consultants from both parties argued that the move would hurt Democrats in 2020, perhaps even rescuing the deeply unpopular President Trump. In fact, after Trump tweeted, “Howard Schultz doesn’t have the “guts” to run for President!” David Axelrod theorized that Trump’s belittling response to Schultz’s announcement was an attempt to bait him into running.

Howard Schultz doesn’t have the “guts” to run for President! Watched him on @60Minutes last night and I agree with him that he is not the “smartest person.” Besides, America already has that! I only hope that Starbucks is still paying me their rent in Trump Tower!

The concern that Schultz would take votes from Democrats is natural, given that he was a lifelong Democrat and major donor to the party who endorsed Hillary Clinton in 2016. But I think this analysis, and the general opposition to his announcement, is misguided.

I for one hope Schultz does decide to run.

For starters, it would make me proud to see Schultz share his American Jewish story on the national stage. His rags-to-riches success story is inspiring, as is the message of empathy and corporate responsibility he’s pushed, which he summed up at the 2017 DealBook conference as the need “to achieve the fragile balance between profit, social impact, and a moral obligation” and “to enhance the lives of our employees and the communities we serve.”

And it wasn’t just talk. Under Schultz’s leadership, Starbucks was one of the first large employers to provide full family health benefits to both full and part-time workers. And he’s made a point of hiring veterans and refugees and providing benefits such as stock ownership and free college tuition programs.

If anything, Schultz could be accused of going too far in promoting his values, such as the poorly-executed 2015 #RaceTogether campaign that was intended to spark a national conversation around race. After the initiative was roundly mocked, Schultz admitted his mistakes. and when two African American men were arrested in a Starbucks last year, he closed 8,000 stores and provided anti-bias training.

Schultz’s addition to our national politics would be a welcome contrast to an administration dominated by the ideological voice of Stephen Miller, a product of American Jewish privilege who represents the polar opposite.

But even more significant than his inspiring backstory is the fact that contrary to the agreed upon narrative, Schultz’s candidacy would likely hurt Trump more than whoever turns out to be Trump’s Democratic opponent. For though he wants to run as an independent, in our current political alignment, Schultz would find himself appealing more to Republicans than Democrats.

In a 60 Minutes interview last night, Schultz told CBS’s Scott Pelley that his primary policy concern is the national debt, which he called the greatest threat facing America. He then went on to dismiss the proposals of new Democrats as “unaffordable” as opposed to his own path to reducing the national debt, which includes “going after entitlements,” meaning deep cuts to Social Security and Medicare.

Rather than a platform that could entice Democrats, Schultz’s policy preferences appear to be straight out of Paul Ryan’s deeply conservative budgets, anathema to any Democratic voter.

Recall that in 2005, Nancy Pelosi used opposition to exactly the type of policies that Schultz is advancing to solidify the Democratic resistance to George W. Bush, setting up the Democratic takeover of Congress in 2006.

And it was the energy of candidates organizing and coalescing around different versions of “Medicare For All” and ambitious, visionary goals around climate change, income inequality, and employment that powered the Democratic takeover of the House in 2018.

Schultz, on the other hand, called those proposals, which exist in many other developed countries, “as false as [Trump’s] wall.”

In this climate, I find it difficult to believe that any democrat would vote for a billionaire whose policy platform would further erode the social safety net — especially if it may help Trump win reelection.

On the other hand, a business leader who speaks a language of unity and healing but advances a policy platform not substantively different from Paul Ryan’s might well be attractive to ideological conservatives looking for an alternative to Donald Trump — who may not be likely to win again at any rate.

In fact, Howard Schultz reminds me of Joe Lieberman, another Jewish former Democrat. In 2000, Lieberman ran for Vice President with Al Gore on a platform of utilizing federal surpluses to solidify Social Security for generations to come. By 2008, Lieberman was on John McCain’s shortlist, representing “centrist” bipartisanship, but also the fiscally conservative policies that lost overwhelmingly to Barack Obama.

Tellingly, Lieberman lost a Democratic primary to the economically liberal Ned Lamont in 2006, and went on to run as an independent, drawing the overwhelming majority of his votes from Republicans.

Democrats never really forgave Lieberman, as evidenced by the harsh reaction to his recent statement hoping and predicting that Alexadria Ocasio-Cortez does not represent the future of the Democratic party.

The evidence suggests he is wrong. But ironically, our political dialogue would be much more productive if more Republicans were like Joe Lieberman.

I think the same could be said for Schultz. Forcing Republicans to split their votes between him and Trump in 2020 may be a good first step in that direction.

Rabbi Avraham Bronstein is rabbi of The Hampton Synagogue in Westhampton Beach, NY. Follow him on Twitter @AvBronstein.