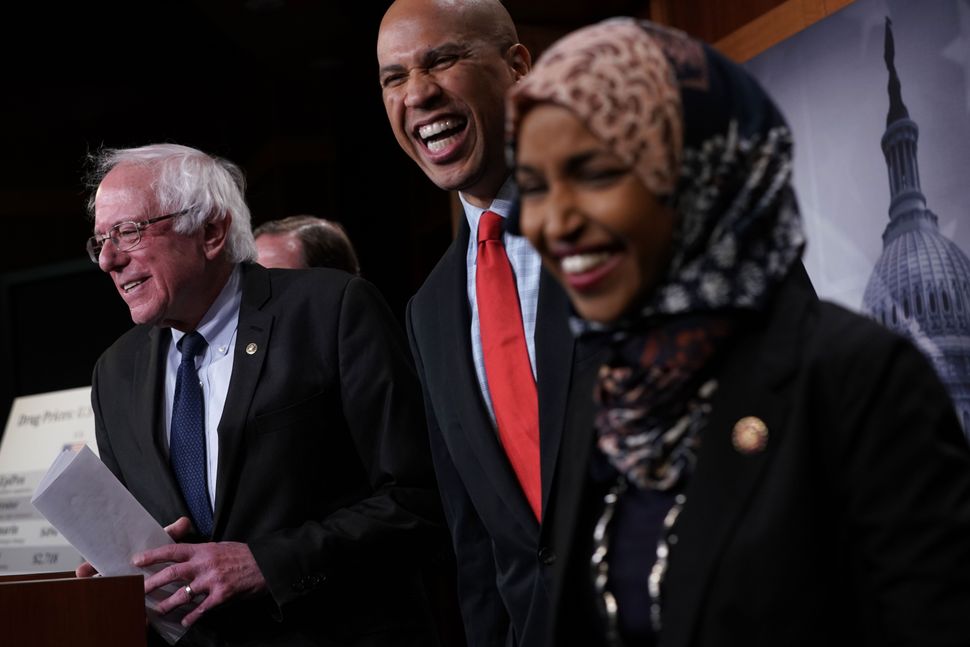 In the lead-up to America’s 2003 invasion of Iraq, a common technique on the right was to either imply or openly accuse anti-war liberals of being in league with Saddam Hussein.

A cheap twist of rhetoric transformed protesting the invasion into endorsing the human rights abuses of Saddam’s regime. If you were against the war, you hated freedom.

Today, this shameful tactic has been dusted off to target people against the Trump administration’s interference in the turmoil in Venezuela.

A US backed coup in Venezuela is not a solution to the dire issues they face. Trump’s efforts to install a far right opposition will only incite violence and further destabilize the region. We must support Mexico, Uruguay & the Vatican’s efforts to facilitate a peaceful dialogue.

“As Venezuelan dictator Nicolas Maduro hunts for allies amid a revolt of his desperate people, he is finding rare support among America’s Democratic socialists,” thundered the Wall Street Journal’s editorial board, which took aim at Sanders, Khanna and Congresswoman Alexandria Ocasio-Cortez.

Similar attacks were leveled at Omar.

“Is Omar’s embrace of socialism so steadfast that it blinds her to the children dying in the streets at Maduro’s hand?” Nachama Soloveichik asked in these pages. “Or is her obsessive hatred of Donald Trump so intense that she can’t recognize the monster she’s defending?”

America’s first Muslim congresswoman, a self-described refugee, using her platform to repeatedly absolve Venezuela’s kleptocratic, repressive, authoritarian regime which has impoverished its people and turned over 3 million citizens into refugees. What a wasted opportunity. https://t.co/LORdgH1Q3z

These allegations are dangerous, and not only because they quote people as saying things they never said. They degrade public discourse, erode trust in the media, and muddle the fight for human rights.

It is simply false to suggest that opposing regime change means you support the regime. China is currently enslaving about a million Uighur Muslims in reeducation camps. If we use smear logic, anyone who doesn’t support an immediate U.S. invasion of China is a gulag-loving Communist Islamophobe.

And the falsehoods erode trust in the media. While the smear tactic might have worked in 2003, with today’s instant internet access, it takes two seconds to look up, say, Sanders’ press release or Khanna’s Washington Post op-ed and realize they’re actually denouncing Maduro’s abuses and their words are being twisted.

Eschewing accusations that wouldn’t even fly in middle school is a good place to start regaining public trust for an embattled media.

Even worse is how such insinuations not only paint opponents of intervention as lovers of monsters, but create the false impression that human rights violations aren’t routinely tolerated in Washington. “This isn’t normal,” imply the self-righteous hysterics. “U.S. politicians don’t support murderers of children.”

If the murder of children in Latin America is a concern, we can start with Elliott Abrams, who was just appointed the White House’s point man on Venezuela.

For those who aren’t familiar with him, Abrams spent the 1980’s promoting democracy by giving a nod to the genocidal death squads in Guatemala and El Salvador while gleefully helping defend their stomach-churning atrocities.

The year was 1995. A young Elliott Abrams taught us how to laugh. Maniacally. When Allan Nairn brought up his involvement in the mass murder and torture of indigenous people in Guatemala. pic.twitter.com/N2nfDQAUrf

That’s a whole lot of dead kids. Appointing a man who allowed the arming of death squads that left piles of bodies across Central America is like reinstating Larry Nassar on Michigan State’s gymnastics team.

In so doing, the U.S. government sent a horrific, callous message that human rights don’t matter, a message exponentially more powerful than any Congressperson’s tweet.

Exposing Abrams’ actions and demanding his removal is low-hanging fruit; unlike Maduro, Abrams can be fired with a single memo from Trump. But there’s been no outcry about having a genocide enabler representing America on the world stage.

But there’s no need to dredge up little corpses from three decades ago; Washington overtly supports plenty of monsters murdering children today.

Take the Gulf monarchies of Saudi Arabia, the United Arab Emirates, and Qatar. These are some of the most brutal regimes on the planet, medieval torture houses posing as modern nations. And DC can’t get enough of them.

Prior to Saudi Arabia going off script by decapitating Washington Post columnist Jamal Khashoggi, the Kingdom was one of America’s strongest allies. Every president in recent history wined and dined the Saudis.

Six months before becoming “Mr. Bone Saw,” Saudi dictator Mohammad bin Salman went on a lovefest tour of America, smiling with politicians and luminaries and racking up praise in the media (with the notable exception of the Forward).

He did this all while starving and bombing millions of Yemenis, with American aid.

Ending U.S. support of Saudi atrocities in Yemen is also low-hanging fruit. We don’t have to actually do anything; we just have to stop aiding the Saudis.

Yet in vote after vote, lawmakers have consciously elected to continue abetting slaughter on a scale approaching war crimes.

Meanwhile, the media barely paid attention to the matter until after Khashoggi’s murder.

It’s not just politicians. You can’t spend five minutes in Washington without stumbling into blood-soaked petrodollars.

Soloveichik’s essay cited a study by the Brookings Institution, which receives funding from the UAE and Qatar. The UAE has spread the love by providing funds to numerous other DC think tanks, including the Atlantic Council and the Center for American Progress (The Center for American Progress recently announced it would no longer accepts funding from the UAE).

And a 2014 expose by the New York Times discovered the Gulf States got their money’s worth by influencing the think tanks.

If we’re going to cite Brookings in an essay on human rights, let’s ask them about receiving hundreds of thousands of dollars from a place whose migrant worker conditions have been likened to modern slavery.

We should absolutely condemn partnerships with monsters. But doing so requires honestly assessing the situation. A good example is Khanna asking, “Where is your outrage for the 14 million Yemeni civilians at the brink of starvation because of our intervention and support of Saudi Arabia in Yemen?”

My question to those who support intervention in Venezuela because people are starving:

Where is your outrage for the 14 million Yemeni civilians at the brink of starvation because of our intervention and support of Saudi Arabia in Yemen?

Otherwise, pretending our support of human rights abusers is an aberration is not only untrue, but counterproductive. It makes it appear that the problem is marginalized, instead of systematic, and that doesn’t help anyone. Especially not the children.

Lev Golinkin is the author of “A Backpack, a Bear, and Eight Crates of Vodka.” He came to the US as a child refugee from eastern Ukraine in 1990. His op-eds and essays have appeared in The New York Times, Los Angeles Times, The Boston Globe, and Time.com