The Key To Fighting Anti-Semitism? Children 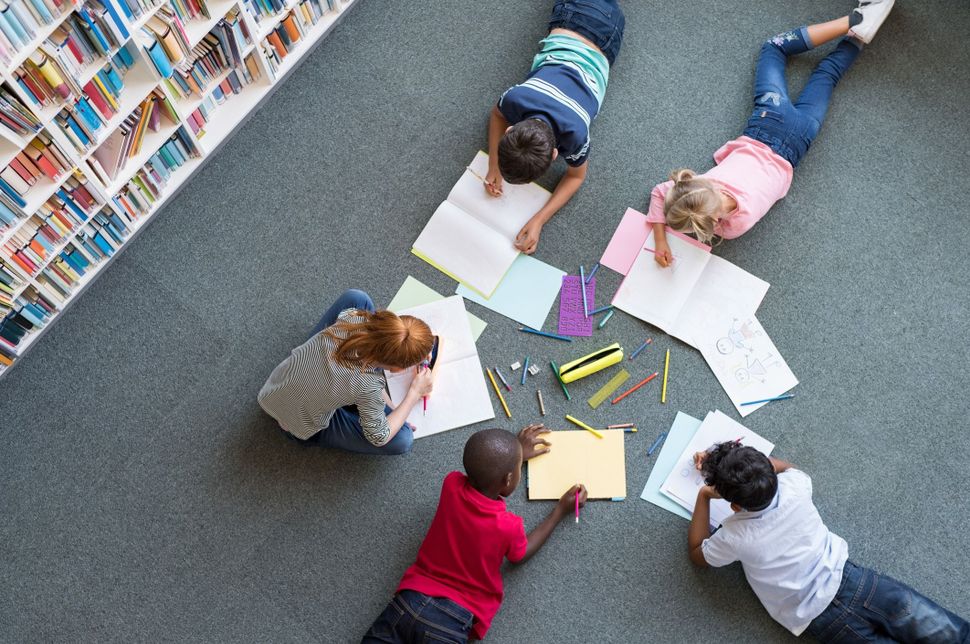 It’s no longer deniable that anti-Semitism is on the rise across the globe. According to the Anti-Defamation League, anti-Semitic incidents in the United States rose by a record 57% in 2017. Beyond the vivid and terrifying displays of anti-Jewish hate in the 2017 Unite the Right rally in Charlottesville and the 2018 Tree of Life shooting in Pittsburgh, there has been a rash of assaults on individual Jews, incidents of vandalism against Jewish institutions, countless threats and insults.

These horrific episodes have left many flummoxed about how to stop them. Some have suggested banning books or websites that promote anti-Semitism. But doing so would run counter to both American and Jewish values. Voting elected officials who espouse anti-Semitic dogwhistles (sadly, there is no shortage of them) out of office is another strategy. But it fails to address the underlying anti-Semitic ideas that these officials harped on in the first place.

The only thing that will truly halt the rise of anti-Semitism in America is education. Specifically, proactive religious literacy education about Jewish life, culture, and history in primary and secondary schools would go a long way towards undermining propaganda and recruitment efforts of hate groups and white supremacists.

For starters, people who become white supremacists as adults often try on those ideologies while they are still quite young. Nearly a quarter of anti-Semitic incidents that were reported in 2017 took place in K-12 schools.

One study published in 2017 by the Institute for Social Policy and Understanding found that Jewish students are bullied twice as much as the general population. And when students with anti-Semitic attitudes graduate, they bring their prejudices with them to their religious communities, civic organizations, workplaces, and families.

This means that addressing these attitudes in a school environment would get at the source of the problem—and effectively, too. Deprogramming white supremacists can take tremendous time, energy, and resources; but keeping young people from being recruited by hate groups in the first place is a far better use of energy and resources.

A nuanced education about religion equips students to see through the tactics that white supremacists use to draw them in. When young people understand the different belief systems of different religious communities and how they behave, they are equipped to become citizens of the world — and better citizens of our increasingly religiously diverse society.

More importantly, as one promising study by Emile Lester and Patrick Roberts found, students who study religion academically do not become more or less religious, but they do become more willing to protect the rights of others with whom they disagree.

Unfortunately, school systems and other educational institutions have failed to prepare teachers to talk about religion with their students. In the past, parents have brought lawsuits against schools for poorly taught lessons about religion, so teachers shy away from religion altogether and students enter society with a woefully inadequate lack of content knowledge about specific religious traditions.

And yet, primary and secondary education is supposed to provide the knowledge and skills that students need to flourish in an increasingly diverse society. The absence of learning about religion is surely going to hinder their success in this crucial aspect of being a good citizen.

New national guidelines for K-12 education about religion, published by the National Council for the Social Studies, name fourteen learning objectives associated with the concepts and tools of religious studies. The skills outlined in the document are fundamental for challenging the biases and assumptions that too often lead to physical or structural violence against religious individuals and communities. But the guidelines do not elaborate on the content knowledge that students should learn about specific religious traditions or communities.

As educators translate the principles of these national guidelines into concrete curricula, Jewish Studies scholars and practitioners have a unique window of opportunity to shape the conversation about the study of Jewish traditions in public schools.

Experts in colleges, universities, museums, synagogues, and other Jewish institutions of learning should prioritize the creation of research and educational resources that educators can access and use in the classroom.

Scholars should create resources that equip history, civics, human geography, and English language arts teachers to talk about Judaism. By creating and directing teachers to resources that demonstrate the internal diversity, dynamism, and cultural context of Jewish traditions, scholars can empower teachers to ensure that students graduate with the knowledge and analytic skills necessary for breaking down anti-Semitic tropes and prejudices.

There are already some classroom resources on Judaism and anti-Semitism that Jewish Studies scholars can use as a model for new materials. Facing History and Ourselves, Teaching Tolerance, the United States Holocaust Memorial Museum, the National Museum of American Jewish History, and the Religious Freedom Center of the Freedom Forum Institute provide well-respected curricular resources for teaching about these topics and professional development opportunities for educators.

But we need more curricula for more kinds of students, locations, and educational institutions.

Scholars must create collections of carefully curated sources — including texts written by or about Jews, videos, podcasts, photos, and other media — which teachers can integrate into existing history or language arts lessons.

These primary and secondary sources should enrich the discussion of how Jewish communities influence and are influenced by their social, political, and cultural milieus.

By offering overworked and underpaid teachers ready-to-use resources, scholars increase the likelihood that the study of religion in general and Judaism in particular is included in schools.

Public schools cannot constitutionally promote or denigrate any one religion, nor can they promote religion over non-religion or vice versa. But public schools can teach students about different religious and non-religious worldviews with the goal of safeguarding the First Amendment rights of students of all religions and none.

If we are to combat anti-Semitism effectively, we must begin there.

Benjamin P. Marcus is the religious literacy specialist at the Religious Freedom Center of the Freedom Forum Institute. He was also the chair of the writing committee for the Religious Studies Companion Document to the College, Career, and Civic Life (C3) Framework for Social Studies State Standards.

Joshua M. Z. Stanton is Rabbi of East End Temple in Manhattan and Senior Fellow of CLAL – The National Jewish Center for Learning and Leadership. He is a member of the Board of Governors of the International Jewish Committee for Interreligious Consultations, which liaises on behalf of the Jewish community with the Vatican and World Council of Churches.

The Key To Fighting Anti-Semitism? Children