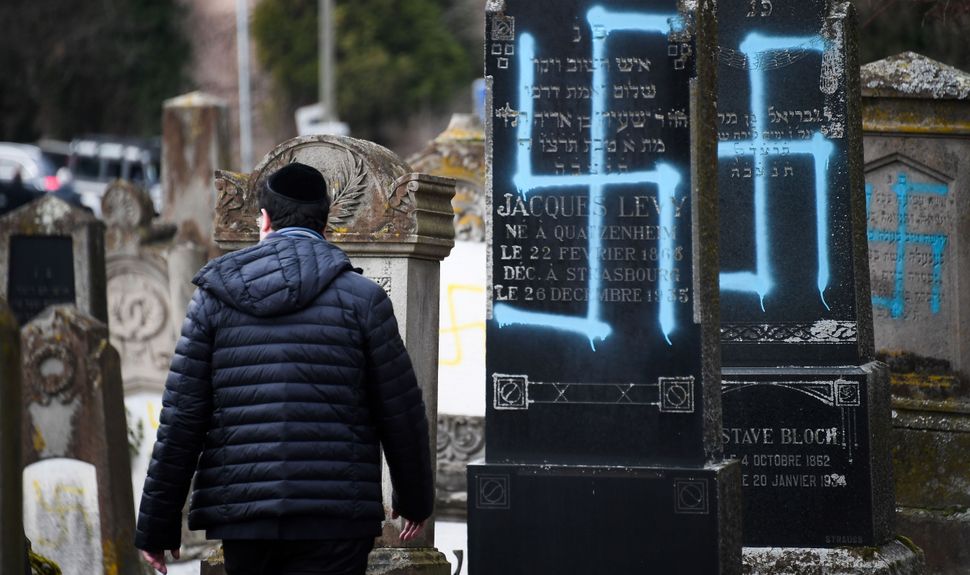 Can it happen here?

It’s a question that Americans, and particularly Jewish-Americans, have asked over the decades when looking to Europe. We see the ocean that separates us as an impenetrable barrier that keeps the pathologies that may plague the old country far, far away from us.

Yet, having spent some time last month meeting with Jewish communities across the continent, I saw in the rising anti-Semitism there glimmers of what is happening here in our own country.

In some cases, the parallels are striking: a violent attack on an Orthodox Jew or a desecrated headstone in a Jewish cemetery is the same in Belgium as it is in Brooklyn. In other aspects, the problems in Europe are significantly more severe, but demonstrate what can happen if we allow anti-Semitism in the United States to grow unchecked.

In France, just the past few weeks, a memorial to Ilan Halimi, the victim of an anti-Semitic murder in 2006, was vandalized.

In Alsace, 80 graves in a Jewish cemetery were defiled with swastikas and tagged with neo-Nazi graffiti.

On the streets of Paris, a well-known Jewish professor literally was accosted by “Yellow Vest” protesters, yelling at him — a born and bred Frenchman — to “go back to Tel Aviv” and attacking him as a “dirty Jew” and “dirty Zionist.”

Whether right-wing extremism, left-wing radicalism, or an individual radicalized by a militant version of Islam, the threat in France is real, and is why thousands of French Jews continue to leave the country year after year.

In Germany, I sat with Jews and heard how they won’t walk the streets of Berlin wearing a kippah for fear of being assaulted. They were angry and resigned at the same time, frustrated that they can’t live openly and freely as Jews.

It reminded me of the situation playing out back in the U.S. where a wave of anti-Semitic violence has targeted visibly identifiable Jews in Brooklyn, leaving them afraid to walk in their own neighborhoods.

In Hungary, a new billboard has sprung up in Budapest accusing George Soros and European Union President Jean-Claude Juncker of trying to force Hungary to accept refugees. This seems to be the next phase of a government-funded campaign of fear-mongering that despicably uses Soros, a Holocaust survivor, to channel anti-Semitic tropes of malevolent Jewish conspiracies and sow fear among the public.

It reminded me of the situation in Washington where elected members of Congress and the pundit class recycle right-wing, extremist memes that depict Soros as a hidden hand manipulating U.S. politics and elections, evoking the same anti-Semitic themes so prevalent in Eastern Europe.

And in the UK on Feb. 18, nine Labour party members of Parliament resigned their political affiliation to protest the party’s institutional anti-Semitism. Unsurprisingly, the Labour leadership responded with indifference, dismissive of their claims and characterizing their departure as little more than a political ploy.

Some have posited that eventually the Democratic Party could fracture in a similar manner. The controversy involving Rep. Ilan Omar’s use of the dual loyalty charge, and the House of Representatives’ struggle to come to a consensus around a bill condemning anti-Semitism, underscores the anxiety of the community that this is headed in the direction of the UK labor party. This came in the wake of the recent unraveling of the Women’s March, where some of its founding leaders resigned because the leadership’s inexplicable unwillingness to reject anti-Semite Louis Farrakhan.

What is happening in Europe should be a wake-up call to all those committed to a free, open, and tolerant America. Moreover, perhaps because they are dealing with a more pervasive anti-Semitism, Europe also points to the steps we in the U.S. can take to prevent its spread.

First, public figures across the political spectrum need to demonstrate solidarity with the Jewish community. Many European Jewish leaders have told me that this hasn’t happened after previous incidents. And yet, in France, President Emmanuel Macron was unequivocal in condemning anti-Semitism. Joining him at the annual dinner for the main Jewish communal organization were members of his cabinet, the mayor of Paris, and leaders from across French society. It was a stunning display of solidarity.

Second, we need to abandon the pretense that anti-Zionism — opposition to Jewish self-determination and a Jewish State in Israel — is anything less than anti-Semitism. President Macron explicitly made this point and committed to institutionalize this fact as policy going forward.

Third, social media companies must police their products more forcefully because hate speech has flourished on their platforms despite their own terms of service — or, in Europe, despite laws — against hate speech.

Europe is far ahead of America in holding social media companies accountable for hate speech. While fully respecting the First Amendment, we can demand that tech companies better understand anti-Semitism and remove it, ensure that it is not monetized for profit, and otherwise make it less accessible on their networks.

Finally, for those anti-Semites dissuaded neither by opinion makers nor social media sanctions, law enforcement needs to be engaged. Both in Europe and America, police, prosecutors, and judges should be trained to understand anti-Semitism and hate crimes so they can differentiate between legitimate criticism of Jewish individuals or the State of Israel and bias-motivated criminal conduct.

At ADL, we hear from Jewish communities across Europe that available legal sanctions rarely are imposed, resulting in a sense of impunity. This must end.

If we want to make sure that anti-Semitism does not infect American society, we must learn both from Europe’s mistakes and actions — before it’s too late.

Jonathan A. Greenblatt is Chief Executive Officer and National Director of the Anti-Defamation League (ADL).