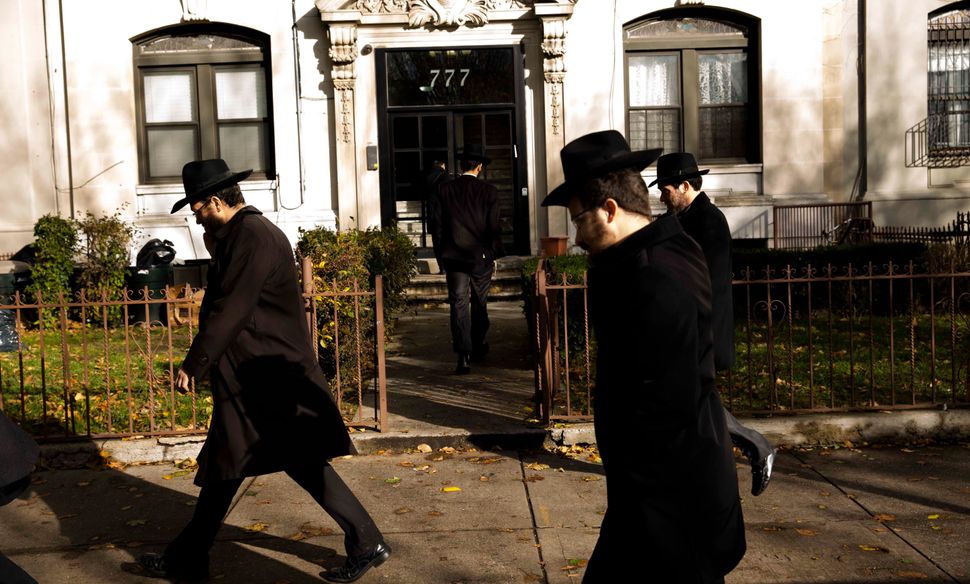 Just before 1 a.m. on a Wednesday morning, a 22-year-old man was sucker-punched while speaking on the phone in Crown Heights, Brooklyn. A few minutes earlier, a 51-year-old man nearby was knocked down and beaten. Neither had anything stolen from them.

The twin attacks, from the same group of three assailants, make at least five attacks on ultra-Orthodox Jews in Crown Heights in 2019 that have shaken the community and heightened fears of deteriorating relations between Jewish and black residents.

The attacks are the latest in a string of muggings, punchings, shovings and threats against ultra-Orthodox Jews in the neighborhood that have occurred over the past year. Jewish Crown Heights residents say that the attacks, despite being frequently treated as bias crimes by police, are not covered by the media as much as more overtly white supremacist anti-Semitic incidents, leaving them feeling “invisible,” as one resident said.

“We feel like we don’t exist,” said Yosef Hershkop, 28, who manages an urgent care center in Crown Heights. “We’re paying high rent, and our wives are scared to push a stroller in the street.”

Crown Heights is both a historically black section of Brooklyn and the long-time home base of the Chabad-Lubavitch group of Hasidic Judaism. Chabad’s longtime spiritual leader, Rabbi Menachem Mendel Schneerson, famously kept his headquarters in the neighborhood In 1991, a car escorting Schneerson hit two small African American children, killing one and triggering three days of riots. During the rioting, a Jewish man was stabbed to death by a black assailant. Hundreds of people were injured.

There have been 15 violent, anti-Semitic incidents directed against ultra-Orthodox Jews in Crown Heights since October, according to an Israeli organization that tracks anti-Semitic incidents, and which appears to be the only group specifically tracking attacks in Crown Heights. But that number is likely much higher, since many incidents — in which residents are robbed, or chased but not physically harmed — have gone unreported, according to Yaacov Behrman, a local activist who directs a community drug use prevention program. In nearly all the attacks, the assailants are people of color.

New York Police Department community affairs officers in Crown Heights could not be reached for comment for this story.

Last week’s back-to-back attacks have been charged as hate crimes, and three men have been arrested in connection with the attacks.

The second beating was caught on a building’s security camera.

A Jew brutally beaten last night in Brooklyn. Nothing stolen. Antisemitism is alive and well in NYC. Time for a hard look at who is doing it and its cause. This has been going on in NY long before Charlottesville or 2016 just ask anyone visibly Jewish. pic.twitter.com/z86dz32YBL

To be sure, there has been some media coverage, including local news reports and a New York Times article in October. But Jewish leaders in Crown Heights residents feel that the attacks are being ignored in favor of a focus on more visibly white supremacist anti-Semitism, such as spray-painted swastikas. Nationwide, anti-Semitic incidents rose by 37% in 2017, but most of those incidents were vandalism, not violence.

“This happened last night in Crown Heights, not in Charlottesville nor at the hands of White Supremacists,” Motti Seligson, media director for Chabad-Lubavitch, wrote on Instagram about the Wednesday attacks. “Time for a serious, and possibly, uncomfortable conversation about the face of antisemitism [sic] in America.”

Behrman, the local activist, compared the media’s coverage of the attacks in Crown Heights with the frenzy over the incident between Catholic students and a Native American elder in Washington, D.C., during the weekend of the Women’s March.

“How is it that kids taunting somebody is a major story, but when a Jew is beaten bloody by Kingston Avenue, there’s barely a blip in the media?” Behrman said.

The incidents in Crown Heights may be difficult for many Jews, and the country in general, to relate to precisely because they are not about white supremacism, according to Rebecca Kobrin, a professor of American Jewish history at Columbia University.

“The rubric for which we talk about anti-Semitism in America is white supremacism, and the notion that certain groups do not belong in this nation,” she said. “And what’s happening in Crown Heights is much more related to the complexities of racial tensions in New York City, and the complexity of shared space, and clearly has nothing to do with white supremacism.”

Evan Bernstein, the regional director for the Anti-Defamation League in New York and New Jersey, called the Crown Heights attacks an “anomaly.”

Bernstein said that the recent murder of 11 Jews in a Pittsburgh synagogue have shed more light on American anti-Semitism. Some national Jewish organizations are tuned into the attacks; the ADL has offered cash rewards for information leading to the arrest of assailants in recent Crown Heights attacks.

But, Bernstein said, many non-Orthodox Jews and Jews living outside New York don’t understand the specific risk that Orthodox Jews run by being visibly Jewish, and may focus more attention on the kind of ideological and categorical anti-Semitism espoused by the far right.

“U and multiple synagogues, you won’t understand what it’s like to be so open and out there with your Judaism, and live in fear,” he said.

Neighborhood organizations have made commitments to stopping the attacks, putting on joint press conferences between non-profits that serve the black and Jewish populations.

But some community members feel that not enough is being done.

Bernstein said that more needs to be done to empower residents to repair the growing racial divisions among themselves.

“This is ultimately going to have to come down to the people in this community having these conversations,” he said.

Residents are careful not to say that not every attack is the result of ideological anti-Semitism. Crown Heights is home to a large number of homeless shelters, raising the possibility that some of the assailants are mentally ill.

Community members feel they have to walk a fine line: advocate for themselves while not miscounting random attacks as hate crimes.

“On the one hand, we have to be responsible, and not jump to conclusions before we have all the information and mislabel an attack,” said Yaacov Behrman, a local activist who directs a community drug use prevention program. “But we also have a responsibility not to whitewash, and if we don’t stand up and call a hate crime a hate crime, nobody is going to do it for us.”

Looking forward, Behrman said he is worried that frustration over the frequent attacks and near-misses is going to boil over. He noted that Crown Heights has a large population of college-age men studying in yeshivas, or religious schools, in the neighborhood, some of whom are ex-Israeli military.

“Our kids are gonna catch the attackers, and they are going to take the law into their own hands, and we’re gonna have a crisis,” Behrman said. “That’s not how we want this to end.”