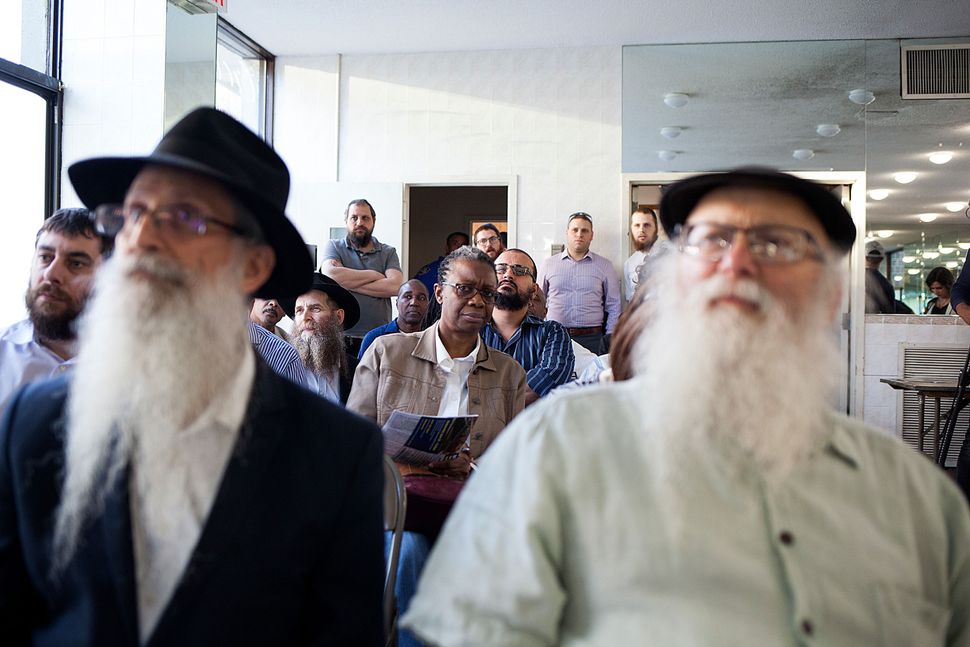 Crown Heights residents attend a Community Board 9 land use meeting on June 12, 2018. Image by Ben Fractenberg

A developer’s plan to erect two luxury buildings in a low-slung residential part of Brooklyn with large Hasidic and black communities sparked the latest wave of concern over skyrocketing rents in the neighborhood, which threatens the two groups who had a history of tension, culminating in the Crown Heights riots of the earl ’90s.

Cornell Realty representatives were met with loud “boos” in the sparse, florescent-lit community room before presenting plans on June 12 to the local community board for two 16-story buildings off Franklin Avenue, which will set aside 140 out of 518 units for below-market rents if their rezoning application is approved.

The condos, which would be located at 40 Crown St. and 931 Carroll St., are the latest project to raise issues about rising rents in gentrified Brooklyn, which community members fear will displace large swaths of Crown Heights community members.

Land use committee member Rabbi Yaacov Behrman abstained on a board vote against recommending the plan because though he’s “absolutely not supporting [the project] as is,” if the City Council and mayor’s office inevitably support the development he wants the board to have input and “work to make sure the community gets as much as possible.”

Behrman, who also chairs the environmental protection committee, added that many in the Hasidic community are worried in general about developments increasing rents and property values in the neighborhood, with some buildings recently selling for as much as $1.6 million in the neighborhood.

“Many many young people in Crown Heights were forced to leave,” he told the Forward. “They cant afford to buy and it’s a huge struggle to find an affordable apartment that can accommodate their family. Only the very rich are able to buy today in Crown Heights.”

Crown Heights gained a large Jewish population from the 1920s through the 1960s, but most of the neighborhood identified as secular. That started to shift in the 1950s, when Rebbe Menachem Mendel Schneerson took the helm of the Lubavitch movement.

By the 60s and 70s, it became one of the largest and most widespread Jewish movements in the world, the center of which is located around Kingston Avenue and Eastern Parkway.

Tensions between the Lubavitch and black communities broke out into violence in the early 1990s after a Lubavitcher lost control while driving in Rebbe Schneerson’s motorcade and fatally struck 7-year-old Gavin Cato.

Things have settled down in the neighborhood over the past several decades, but there are still moments of tension, including the 2016 arson attack of a bus parked outside a yeshiva.

The area is again undergoing major change with a large number of young professionals moving into the area, attracted by more affordable rents and close access to public transportation.

Now with additional high-rise development community members fear landlords are pushing out current residents to make way for a new, more affluent class of residents, something that threatens both lower to middle class Orthodox and blacks.

“The displacement that’s happening right now on our block is massive,” tenant activist and local resident Esteban Giron, 39, told the Forward after the Community Board 9 meeting. “It’s evictions, mostly of elderly people, and long-term tenants, that are basically just being — sometimes fraudulently, sometimes legally — put out.”

Giron, who lives across the street from one of the proposed developments, said that he has seen an increase in landlord harassment and evictions since multiple development projects have been proposed.

Though overall prices have fallen slightly in Crown Heights, the average rent for a two-bedroom apartment hovered above $2,500 in the month of May, according to an MNS Realty survey.

“There’s not luxury housing on this part of Franklin Avenue right now, and the moment that we open that door it turns into Williamsburg. It’s very clear how this has happened in the past,” Giron said.

“We have the obvious playbook of how this is not about coming up with something affordable for the community to live in. We don’t qualify for most of those units. At least from a tenant perspective there’s no good reason to approve.” 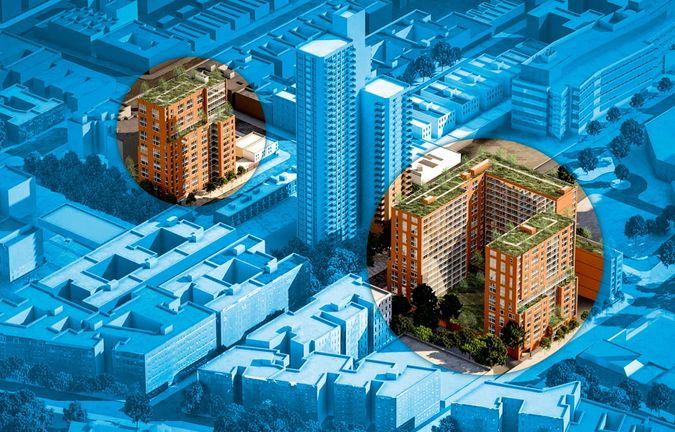 The Crown Heights developments would be located on Crown and Carroll streets of Franklin Avenue if approved by the city. Image by Anya ulinich

Mayor Bill de Blasio’s office made MIH mandatory in 2016 for developers seeking to upzone in low-income areas to create a percentage of below-market units in their buildings. The new housing regulation was expected to create upwards of 12,000 affordable units over a 10-year period.

Many housing advocates have argued that MIH does not go far enough in creating affordable housing since below-market rates are still often pegged to salary ranges well above neighborhood median incomes.

“As a community the young folks can’t afford to live here if they want to. That’s a crime,” said the father, who gave just his first name, Shmuel. “Everybody knows five people who have moved in the past five years.”

Boyd led a group of raucous community members during the meeting, some of who disrupted Cornell’s presentation, at one point yelling out “liar, liar, pants on fire,” when they talked about part of their environmental impact study.

Hunter College urban studies professor Samuel Stein told the Forward that a community’s best chance for opposing a development is often over issues like required studies during the city’s long months-long approval process, known as the Uniform Land Use Review Procedure or “ULURP.”

But communities need to get involved early, because “once the ULURP starts the parameters of deal have already been negotiated.”

While the city does require environmental studies little to nothing is done to look at the impact luxury buildings with below-market units will have on rents in the rest of the neighborhood.

“In New York City fights are really about rents but structured around density and development size,” Stein said.

“I think there are cases when people actually care about density, but fewer than what people really care about, which is cost of spaces.”

Stein said it would take a “whole new system” to better look at the impact on neighborhood housings costs associated with new projects.

“Now is the time given the city charter is up for review,” Stein said. “There is a mayoral-run revision process and city council [process]. That would be the place to change the way the city does all these things.”