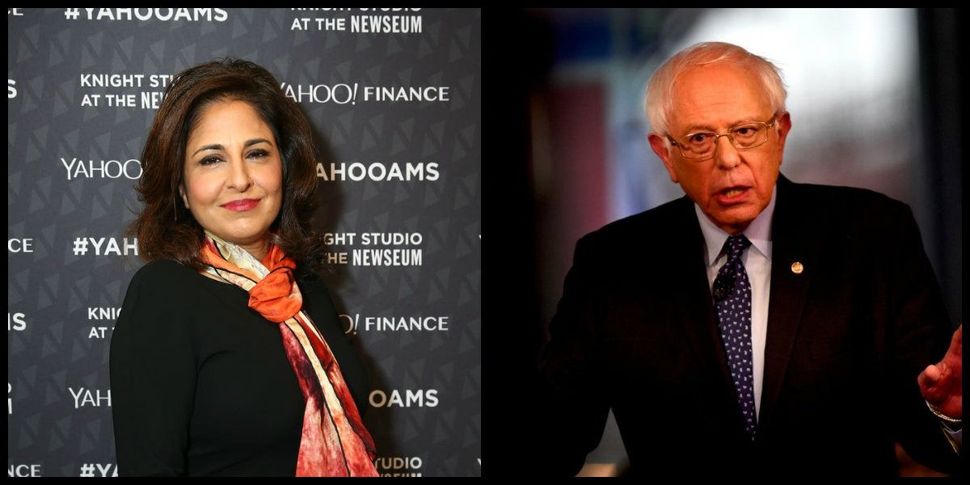 Sanders was incensed by a video produced by the think tank’s weblog, ThinkProgress, that highlighted the senator’s growing wealth following the success of his 2016 book.

He responded by writing to the think tank’s board excoriating them for the video, while informing his massive email list about the reality that CAP is funded by numerous corporations and foreign governments opposed to his agenda.

The ties between CAP and Sanders don’t end there. Sanders’s campaign manager is Faiz Shakir, the former editor-in-chief of ThinkProgress and a CAP alumni. Sanders also recently hired David Sirota, another CAP alum who served as his speechwriter in the 1990’s.

As the New York Times reported, the bad blood between Shakir and CAP president Neera Tanden goes back more than a decade. In 2008, she either punched or shoved Shakir (depending on whose story you believe) after he asked a critical question about the Iraq war to her then-boss Hillary Clinton.

It would be easy to write this all off as an interpersonal clash of personalities — a thin-skinned Senator lashing out at a think tank run by a former nemesis of his campaign manager. But it goes much deeper than that.

I know because I once worked under both Shakir and Tanden when I was a blogger at ThinkProgress between 2009 and 2012. During that time, I clashed with CAP’s leadership about various issues, and also witnessed disputes between Shakir and Tanden firsthand.

Not a single one of these disputes was about personality — whether someone got passed over for a promotion, for instance. They were all about ideology.

CAP, like other think tanks, does a lot of good work. Its staff work hard every day to write and promote policy to improve America and the rest of the world. But when I began working there in 2009, I began to see CAP as a sort of second, analogous White House.

Just as decisions within the government are often highly politicized — with different factions clashing over what policy should be — so too at CAP. The Tanden faction believed that CAP should operate very similarly to the U.S. Government, meaning that policy should be made by taking into account the views of powerful stakeholders like the corporations and foreign governments that finance CAP’s operations. Shakir, on the other hand, took the view that Sanders has taken today, arguing that these donors undermined the institution’s integrity and independence.

Shakir and Tanden argued many times over content at ThinkProgress, with Shakir believing that we had an obligation to report the truth, while Tanden believed that angering donors and political allies limited CAP’s influence. This debate mirrored the debate across the entire think tank, with donors often getting the opportunity to weigh in on policy products. To CAP’s leadership, this influence was simply the pragmatic price of doing business; to CAP’s idealists, this represented a form of corruption.

I was in the idealist faction, and I still am. You can read my stories at The Intercept about how the United Arab Emirates funded CAP while one of its senior staffers was helping it lobby the Trump administration and build ties in the Washington policy community. From my point of view, as from Shakir’s and Sanders’s, this is corruption.Sanders doesn’t believe you can take tons of money from a powerful interest and not be influenced by that money.

That doesn’t mean I believe that Tanden and CAP’s leadership are evil people. As social psychology tells us, the world isn’t made up of good and evil people, but rather, of people who internally rationalize their behavior and believe they are acting righteously.

But I do take the point of view that the model of politics Tanden is following is detrimental to the country. It is hardly surprising that CAP held an off-the-record phone call with reporters to try and undermine Sanders’ Medicare for All legislation; they have their own plan and they have over the years by been financed by corporate titans in the health-care industry. Their board chair, Tom Daschle, is a lobbyist for Blue Cross/Blue Shield.

And while CAP has worked to maintain strong ties to the pro-Israel hawk faction of the Democratic Party, Sanders is increasingly critical of the Israeli government. Part of the reason for this is money. Sanders has a massive small donor base, which gives him leverage to speak his mind. Tanden, on the other hand, boasted about recruiting a powerful pro-Israel board member and donor after inviting Benjamin Netanyahu to address her think tank.

We know that CAP is sensitive and responsive to criticism. Following reporting by Ken Silverstein about its private donor list, CAP finally started disclosing most of its donors in 2013. It also quietly ended its financial relationship with the UAE after my stories and the killing of Jamal Khashoggi.

The criticism that has been effective, however, has been civil, constructive, and measured. Tweeting insults at Tanden, as some of Sanders’s fans have done, is both juvenile and counter-productive. It will only force her to become increasingly bitter and resentful towards Sanders and his movement.

The debate between CAP and Sanders, if it is to create real results, must remain about ideas, not personalities, first and foremost.

It would be easy to write off the CAP-Sanders split as old rivalries and bad blood spilling out into the open. But at the heart of this dispute is an important question: Can we really have independent and thoughtful policy debates while allowing powerful interests to subsidize some of the thinkers?