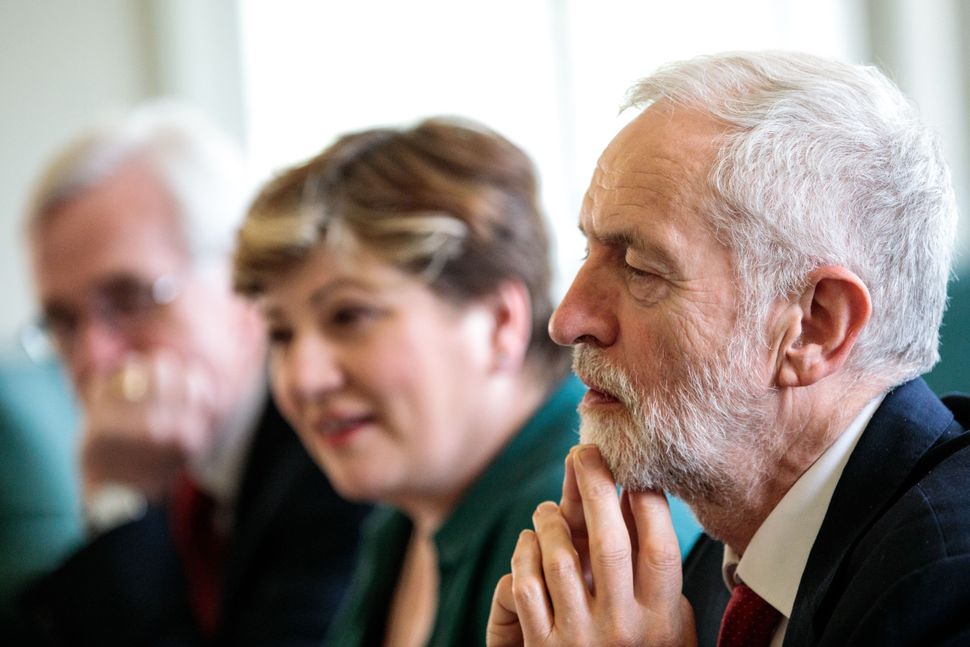 Just over a year ago, I wrote my first article for the Forward defending UK Labour leader Jeremy Corbyn against the claims of anti-Semitism that have beset the Party under his leadership. I still stand by everything I wrote. But one year later, it’s difficult to describe him as I once did, as the “leader young Jews have waited for.”

In a context in which a global rise in anti-Semitism is leaving Jewish people feeling increasingly vulnerable, and in which the media is eager to exploit our emotions, I need to be careful with my words. I don’t want my voice to be unwittingly added to the chorus claiming that Corbyn is himself responsible for the rise in anti-Semitism, or that he is unusual in his rather lacklustre responses to anti-Semitic attitudes.

But while the scrutiny directed at Corbyn and Labour might be disproportionate, that doesn’t excuse the problems it has revealed. Corbyn and his supporters need to stop pointing at the unfair spotlight that singles them out, and instead use that spotlight to address what history has left unaddressed: the prevalence of anti-Semitism on the left and in wider British society.

Yesterday, in the latest episode of “Oy — Jeremy Corbyn!” the Labour leader came under criticism for a foreword he wrote for the 2011 edition of J.A. Hobson’s 1902 work “Imperialism: A study.” Hobson, an important political thinker who influenced Lenin, among others, was also — like many 19th century commentators — a virulent anti-Semite. He described Jews as in control of both the press and the stock exchange, and responsible for the 1899 Boer War. In “Imperialism,” Hobson repeated these tropes, arguing that “men of a single and peculiar race, who have behind them many centuries of financial experience … are in a unique position to control the policy of nations.” He goes on to describe these “financial kings” further in a chapter titled “economic parasites of imperialism.”

In his foreword to the book, Corbyn described Hobson’s analysis as “correct and prescient” and made no mention of its pernicious anti-Semitism. The foreword lent support for concerns that the Labour leader has a “blind spot” when it comes to Jew hatred.

A Labour spokesperson responded to say Corbyn rejected the anti-Semitism in the book and was praising Hobson’s “wider analysis.” Corbyn’s foreword, however, suggests that rather than rejecting Hobson’s anti-Semitism, he didn’t really notice it, or at least didn’t think it was worth mentioning.

It is true that racism and anti-Semitism were common in 19th century political thought, a feature often overlooked in modern blurbs and analyses of canonical political theorists like Hobson. Corbyn’s supporters have been quick to point this out, highlighting that Hobson has frequently been cited and admired by other politicians, including Tony Blair and Gordon Brown. In 2015, Michael White, a former Political Editor of the Guardian, one of the many publications now slamming Corbyn, referred to Corbyn’s foreword to “Imperialism” as “perfectly decent.” It’s no coincidence, I’m sure, that this story broke on the eve of important local elections.

It seems indisputable that Corbyn has once again been singled out, being held to a higher standard than most politicians. Given, however, that he has been dogged by accusations of anti-Semitism since becoming leader — and has previously failed to recognize the anti-Semitic tropes used by Hobson, for which he quite rightly apologized — dismissals of this scrutiny as unfair have started to sound a bit empty.

And if the bar has been raised recently — great! Students of political thought, including myself, have long complained that university curricula are dominated by the works of racist, sexist, bearded white men who achieved their place in the political canon via the admiration and endorsement of other bearded white men. The same thing could also be said for the UK Parliament. This needs to change. Demanding that politicians currently in power at least acknowledge the problematic and dangerous elements of their 19th century idols is a good place to start.

In Hobson’s case, anti-Semitism was absolutely intrinsic to the “wider analysis” so admired by Corbyn and others on the left. His argument — that capitalism fuelled modern imperialism — cannot be separated from his belief in the “peculiar race” of “economic parasites” pulling the strings without explicitly acknowledging and renouncing that racist belief. The fact that these beliefs were the norm back then is hardly a reason not to mention them; it was these widespread beliefs that led to millions of Jews being murdered in the Holocaust, as well as in the lesser-remembered pogroms carried out by communist as well as Tzarist forces during the Russian revolution.

Left anti-Semitism, like racism, sexism, homophobia and transphobia, is an uncomfortable truth that scars our movements and their history. And while I appreciate and share concerns that Corbyn’s opponents are using this example not only to undermine him, but his anti-capitalist argument, we aren’t going to stop that by pointing at the Tories and saying “look at all their racist heroes.”

Instead of trying to move this spotlight onto someone else, we can use it to support and develop Hobson’s anti-capitalist arguments while explicitly rejecting his vile anti-Semitism.

Of course, anti-Semitism is far from a left-wing problem. But I’m tired of being made to feel like a “splitter” for pointing out that it is a problem.

Yes, fighting the far right must be a priority. But minorities need to feel comfortable in our own movements in order to take part in that fight. Movements founded on principles of justice and equality should be setting an example to this messed up world, not simply mirroring it.

Yes, Corbyn is being held to a higher standard when it comes to anti-Semitism. But in my opinion, the best thing he can do to address that is to meet that standard. By admitting that anti-Semitism is something he has not fully understood or taken seriously, reflecting on his mistakes and changing his views, he can set the example, which might actually lead to tackling anti-Semitism on the British left.

Interestingly, the only time I think I’ve encountered this much “whataboutery” is in response to my criticisms of the State of Israel. I’m frequently presented with lists of atrocities carried out by other nations, and asked why I choose to hold Israel to a higher standard.

But secondly, why shouldn’t I? Israel is a country I was brought up believing was a bastion of liberation, a state that existed to keep me safe. Why shouldn’t I expect more from it?

The same goes for Jeremy Corbyn. Corbyn is the first elected politician to really give me hope. He’s a self described life long anti-racist. I’ve seen him show up to support more local causes than any other MP, and he seems to really listen to people.

If he wants to restore my faith in Parliamentary democracy, not to mention bearded white men, he needs to raise the bar, not try to meet it, including when it comes to tackling anti-Semitism.

Annie is a campaigner and graduate researcher in Jewish and Yiddish History from London.