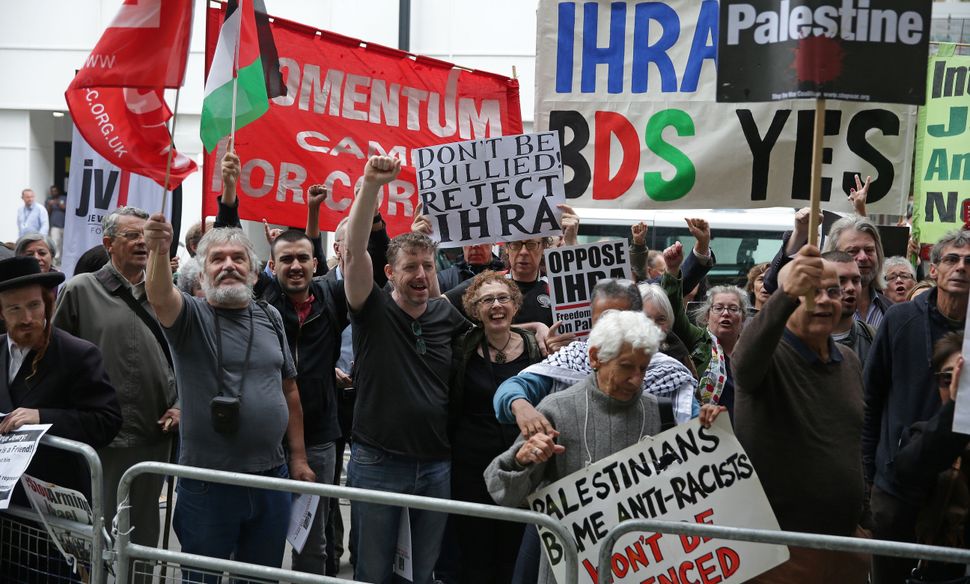 Minnesota congresswoman-elect Ilhan Omar has come under fire for her lukewarm support of BDS, the nonviolent movement to boycott, divest from and sanction the state of Israel, as well as for an anti-Semitic comment she made in 2012 and has not redacted.

“Israel has hypnotized the world, may Allah awaken the people and help them see the evil doings of Israel,” she tweeted.

This statement feels too close for comfort to the anti-Semitic conspiracy theories we’ve all heard before: Jews run the world, Jews run the banks and Jews control the governments of all the nations of the world.

In response to a tweet that appeared during her primary campaign in May 2018, which cited this example of anti-Semitism and called Omar a “Jew-hater,” she replied, “Drawing attention to the apartheid Israeli regime is far from hating Jews.”

While Omar is correct that it is possible to criticize Israel, and even to support the BDS movement, without being anti-Semitic, this comment invokes anti-Semitic canards we’ve all heard before and is recognizable as anti-Semitic by most.

Still, if I lived in Minnesota (I very much don’t), you can bet that my vote would have been cast for Rep. Omar this past Election Day.

Omar’s stances, while definitely imperfect, show a commitment to the values of equal opportunity and of dignity of life for all.

She advocates for an end to the need to borrow huge sums of money for postsecondary education by making public universities tuition-free. She’s committed to fighting for Medicare for All and working to provide quality healthcare for every American. She advocates for a $15 an hour minimum wage and stronger unions. She’s committed to working for legislation to end discrimination of LGBT+ individuals and actually states on her campaign website that “if we are going to dismantle systemic racism in our country, we must radically transform our approach to criminal justice and invest in restorative justice practices.”

It’s not solely the fact that I agree with nearly every single one of her policy positions and don’t want to let one statement on Israel, no matter how vehemently I disagree with it, allow a Republican to take office.

To fully understand why I would have voted for Ilhan Omar, we have to unpack a concept known as an ethical gap.

But that’s exactly why we have to push the left.

A left that adheres to its values of inclusion and equality for all, without exception, is a left that is good for Jews. That kind of left controlling our government will create a society that’s good for Jews. And it’s obvious we’re not at that point yet.

Democrats and leftists in the United States frequently make anti-Semitic comments, conflate Jews with Israel and give credence to anti-Semitic conspiracy theories.

More than anything, though, they frequently simply ignore the oppression and interests of the Jewish people.

While imperfect in many ways, from its frequent ignorance of anti-Semitism to its frequent reluctance to go after systemic issues in favor of surface level solutions, progress is possible within the Democratic Party only if we push it to align with its values.

And this simply isn’t true for the Republican party, or the right in general, here in the United States.

The right doesn’t even pretend to care about marginalized groups or give lip service to equality.

The anti-Semitic actions of the Republican party, things like constant references to George Soros and globalists that play on centuries-old conspiracy theories, does not present us with an ethical gap at all.

The anti-Semitism of the right fits neatly into a pattern of racism,homophobia, misogyny and especially Islamophobia on the right.

There is no conflict whatsoever between the proclaimed values of the American right and its actions as it relates to anti-Semitism.

There’s no blind spot when it comes to Jews; bigotry is simply the right’s status quo.

Of course not; the right in America was the architect of an executive order that specifically sought to ban individuals from Somalia and six other predominantly Muslim countries from traveling to the United States.

This “travel ban,” often referred to as the “Muslim ban,” caused many refugees from countries like Somalia and Syria to face detention at U.S. airports and caused many more to avoid fleeing to the U.S. entirely.

While it is true that this bill was, technically, a unilateral move by President Trump, influential Republican Senators and Congresspeople, like Paul Ryan and Lindsey Graham, endorsed this ban.

As American Jews, we need to recognize that our liberation from cycles of anti-Semitism is linked to the struggles of liberation of other marginalized groups.

We must all be safe, or none of us truly are.

And in the United States, those on the left are the only ones even talking about equality for marginalized groups. The left needs to do much, much better, for Jews and for all, but they can be pushed.

And that’s why I’m glad that Rep. Omar is heading to Washington, D.C. to represent Minnesota’s 5th district.

She’s said anti-Semitic things and she’s internalized anti-Semitic biases. But her values lie miles away from anti-Semitism; they lie in the statement she made in her victory speech on Election Night: “We will fight to abolish ICE, keep families together, protect refugees, protect women’s right to choose and fight against climate change,” she declared to rapturous applause. “And as we fight for our immigrant families, our neighbors, our children, our planet, our communities, I promise to always have your back.”

The same values that propel Omar to fight for immigrants or protect the rights of women in this country should propel her to protect and stand with Jews. We just need to push her.

Doing that is hard. When you see anti-Semitism from an elected official, your first thought isn’t to analyze the values of the politician and then push them back towards their values. It’s to be angry, and feel vulnerable and feel hurt. And that’s understandable; and I feel that too.

But what is going to make this a nation where we can have leaders free of anti-Semitism is not unproductive anger, no matter how justified. What will make this country into one where we as a people feel safe is speaking to the American left with an open heart, and saying but one sentence: “I know you can do better, and I’m going to push you to.”