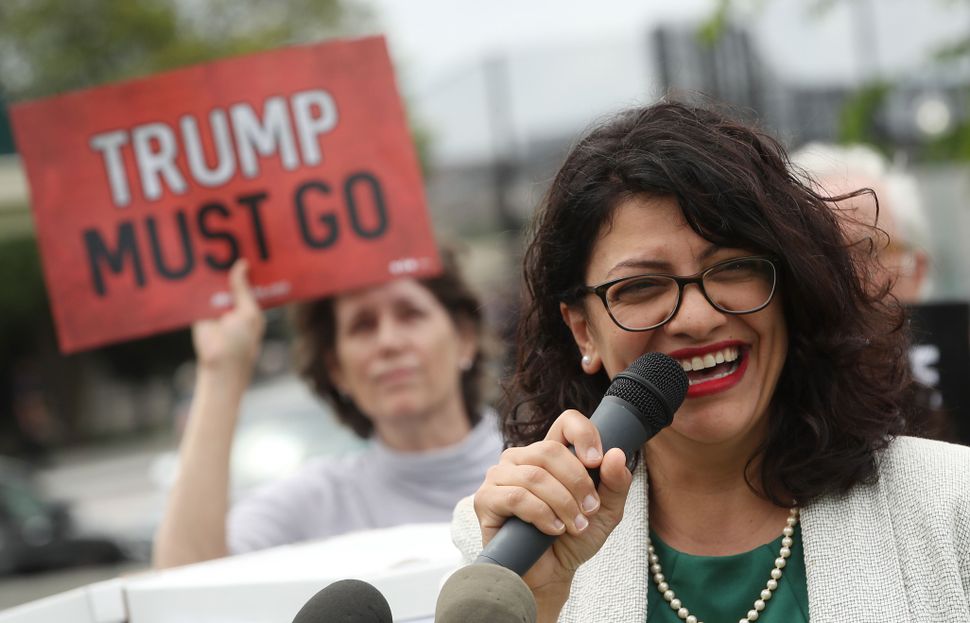 In an interview published on Saturday, Michigan congresswoman Rashida Tlaib, the first Palestinian woman to be elected to Congress, offered a bizarre reading of history.

“There’s always kind of a calming feeling when I think of the tragedy of the Holocaust, that it was my ancestors — Palestinians — who lost their land and some lost their lives, their livelihood, their human dignity, their existence, in many ways, has been wiped out … in the name of trying to create a safe haven for Jews, post-Holocaust, post-tragedy and the horrific persecution of Jews across the world at that time,” Tlaib told the Skulduggery podcast. “And I love the fact that it was my ancestors that provided that in many ways.”

This was a strange iteration of the not uncommon sentiment among Palestinians and their supporters that they, too, should be considered victims of the Nazis. But Tlaib’s formulation is less offensive in my view: She was not so much expressing resentment as she was trying to offer some sort of cosmic rationalization for her family’s travails.

As I said, bizarre.

It is historically problematic. The Zionist movement preceded the Holocaust and had declared its intentions for the land well-before the rise of Hitler. It’s inaccurate to imply Zionism was a response to “post-Holocaust” suffering of the Jews. Additionally, the Palestinians so strongly opposed Jewish immigration that their leadership even rejected Britain’s 1939 White Paper, which placed heavy restrictions on Jews entering Palestine, on the grounds that it was too friendly to Zionist ambitions.

Unfortunately, this weird remark by Tlaib triggered a wildly disproportionate backlash from some of her pro-Israel opponents. For them, it was not enough that she was wrong; the diametric opposite of her statement had to be true.

Einat Wilf, a former member of the Knesset for the Israeli Labor Party who left in 2011 to help prop up Benjamin Netanyahu’s government, wrote on Twitter that Palestinians, in fact, bore “MASSIVE responsibility for [the] scale of the Holocaust” because their opposition to Zionism had “forced Britain to betray its mandate.” The tweet has been “liked” over 1,000 times as of this writing.

Is she [email protected]&*ing kidding?! Arabs of Palestine bear MASSIVE responsibility for scale of Holocaust. Had they not opposed Zionism at every turn and forced Britain to betray its mandate, the Jews of Europe would have had a place to flee when they still could! https://t.co/Pee4qtyabv

We have been here before. Anyone who has spent more time on these corners of the Internet than should be allowed has surely encountered images of the infamous and largely profitless meeting between Haj Amin al-Husseini and Adolf Hitler being invoked as evidence of major Palestinian complicity in the Holocaust.

In 2015, Prime Minister Benjamin Netanyahu took this to ridiculous extremes. Walking right up to the line of what in some European countries would be legally deemed Holocaust denial, the son of an historian said the final solution had actually been the Mufti’s idea, foisted upon Hitler who (in this telling) merely wanted to expel the Jews before that fateful meeting.

While Wilf’s response doesn’t approach the inaccuracy of Netanyahu’s words on the subject, it is nevertheless another unnecessary and tendentious argument for Palestinian culpability in the Holocaust. Palestinian opposition to Zionism, like Zionism itself, preceded the Holocaust by many decades and is not understood by historians to have played a significant role in the worldwide moral failure to accept Jewish refugees. Indeed, the Palestinians were arguably least successful in stopping the inflow of Jewish refugees before the war, with over 200,000 Jews entering Palestine during the fifth Aliya.

Britain’s 1939 White Paper, which is probably the “betrayal” Wilf was talking about, was indeed issued in response to Arab-Palestinian opposition to continued Jewish immigration. That the Arab population, which had everything to lose from Zionism, opposed Zionism, is not very surprising, and the more clear-eyed Zionists understood from the beginning that conflict was inevitable. Saying Palestinians bear more responsibility for the “scale of the Holocaust” than other countries that rejected Jewish refugees is to place an unreasonable burden on a beleaguered people.

Perhaps Wilf should think of her own stringent opposition to Palestinian right of return before moralizing about Palestinian attitudes toward Zionism. They are both understandable in the appropriate context of tragedy, and it would be similarly unfair say Israel bore “massive responsibility” for the brutality visited upon Palestinian refugees in Yarmouk, Syria, because those refugees would not have been there had Israel allowed them to return.

The initial success of Zionism created a conflict. The ultimate success will require resolving it. Desperately trying to make the conflict more than the local tragedy it is moves us further away.

Amos Oz often described the Israeli-Palestinian conflict as “a tragedy between right and right,” recalling Isaac Deutscher’s metaphor of a person (Israel) jumping from a burning building and landing on an innocent bystander (the Palestinians), crippling them. I’ve always found this to be an inspiring rejection of the perilous quest for absolute meaning in catastrophe. If only our public figures shared this wisdom.