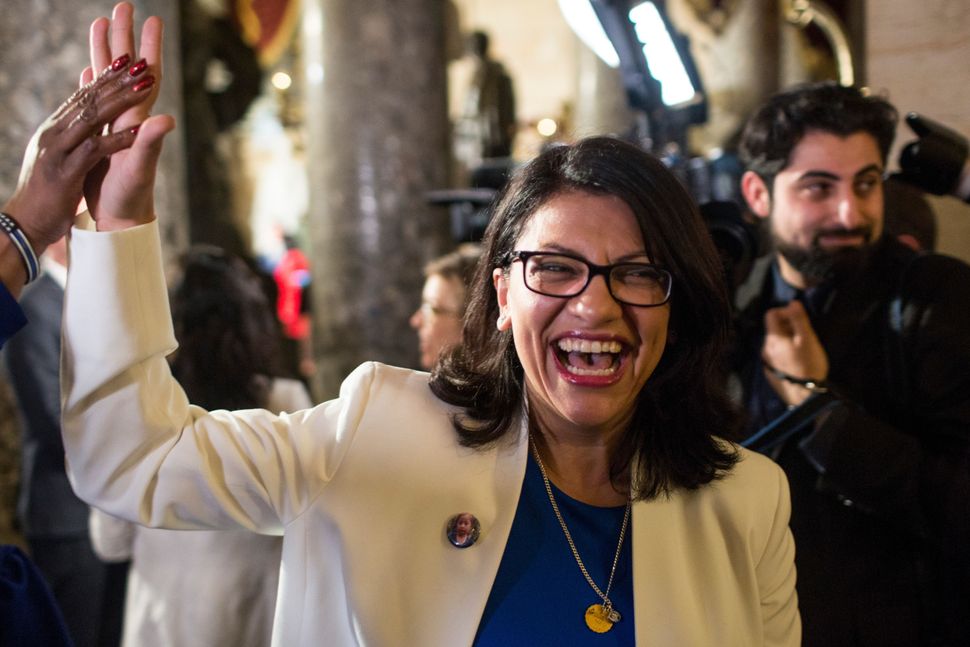 Yesterday, Representative Rashida Tlaib was smeared as an anti-Semite by Donald Trump and company. The accusation is false, but that’s not news. Republicans have been using the anti-Semitism charge cynically for some time.

What is new, bitterly ironic, and quite sad, is that not only did Tlaib say nothing at all anti-Semitic, but what she did say was remarkably philo-Semitic. She made a morally courageous attempt to reach out to American Jews, a statement of almost heartbreaking moral generosity—and for that, she is being called “anti-Semitic.”

Tlaib, the first Palestinian-American woman in Congress, was interviewed for a podcast released Friday. In it, she spoke about the Holocaust. Here’s what she said:

”There’s always kind of a calming feeling I tell folks when I think of the Holocaust, and the tragedy of the Holocaust, and the fact that it was my ancestors, Palestinians, who lost their land and some lost their lives, their livelihood, their human dignity, their existence in many ways, have been wiped out, and some people’s passports… I mean, just all of it was in the name of trying to create a safe haven for Jews.”

If you listen to her remarks, it is obvious that the “calming feeling” is not about the Holocaust (which she later calls “the tragedy and the horrific persecution of Jews across the world at that time”). It is about the fact that Palestinians lost their lives and land so that Jews could have a safe haven.

This of course did not stop cynical actors like Representative Liz Cheney from issuing a press release accusing Tlaib of “saying The Holocaust gives her a ‘Calming Feeling.” Nonsense.

But this perverse attack is even more galling because in fact Tlaib was saying something remarkable, surprising, and important. Here are the rest of her remarks:

”I mean, just all of it was in the name of trying to create a safe haven for Jews, post-the Holocaust, post-the tragedy and the horrific persecution of Jews across the world at that time, and I love the fact that it was my ancestors that provided that, right, in many ways. But they did it in a way that took their human dignity away, right, and it was forced on them. And so when I think about a one-state, I think about the fact that, why couldn’t we do it in a better way? … I want a safe haven for Jews. Who doesn’t want to be safe? I am humbled by the fact that it was my ancestors that had to suffer for that to happen.”

Tlaib acknowledges and honors the need of the Jewish people for a “safe haven” after the Holocaust. She was explaining that she understands Jews’ desire and need for a place to go after the Holocaust, and that a very serious good was accomplished by them going to Palestine, though it came at the obvious cost to her people.

Leftists usually describe Zionism as a colonialist project, imposed by strong European Jews on hapless Palestinians. By centering the Holocaust, Tlaib acknowledged Jewish vulnerability. She described Jewish migration to Palestine not as a colonialist imposition of power but more, in the old metaphor, as a man jumping out of a burning building who lands on a bystander.

She sounds, frankly, like something which these days is far less popular than an anti-Semite: a liberal Zionist.

To be clear, Tlaib is sharply critical of Israel, supports the Boycott Divestment Sanctions movement, and is probably personally an anti-Zionist. It would be hard for a Palestinian on the Left to be otherwise.

But that just makes her comments all the more courageous. It doesn’t take much courage to talk about the Holocaust as a Zionist. But to believe that Jewish Israelis are violent occupiers oppressing your people and occupying their historic homeland, and yet to explain sympathetically why they have done so? That is moral empathy for your enemy.

Of course, it doesn’t really matter how morally courageous or generous she is. Anything short of personally going to dig the foundations for the next West Bank settlement, and a Palestinian-American congressperson was inevitably going to be tarred an anti-Semite.

Still, the whole thing is so perverse and sad, because we Jews should pray for Palestinian advocates as sensitive to our histories and needs as Tlaib is.

We should listen carefully as Republican politicians twist her words for political benefit. We should also note that, even as he called Tlaib an anti-Semite, Trump hosted far-right Hungarian leader Viktor Orban, who has spearheaded massive Holocaust revisionism and used anti-Semitic propaganda, at the White House.

And we should ask ourselves who the real threat to American Jews is, and who are our true friends.

Raphael Magarik is a graduate student in English Literature at UC Berkeley. His work has appeared in The Atlantic and The Forward.