My Father Tried To Hide The Nakba – But It Found Me. 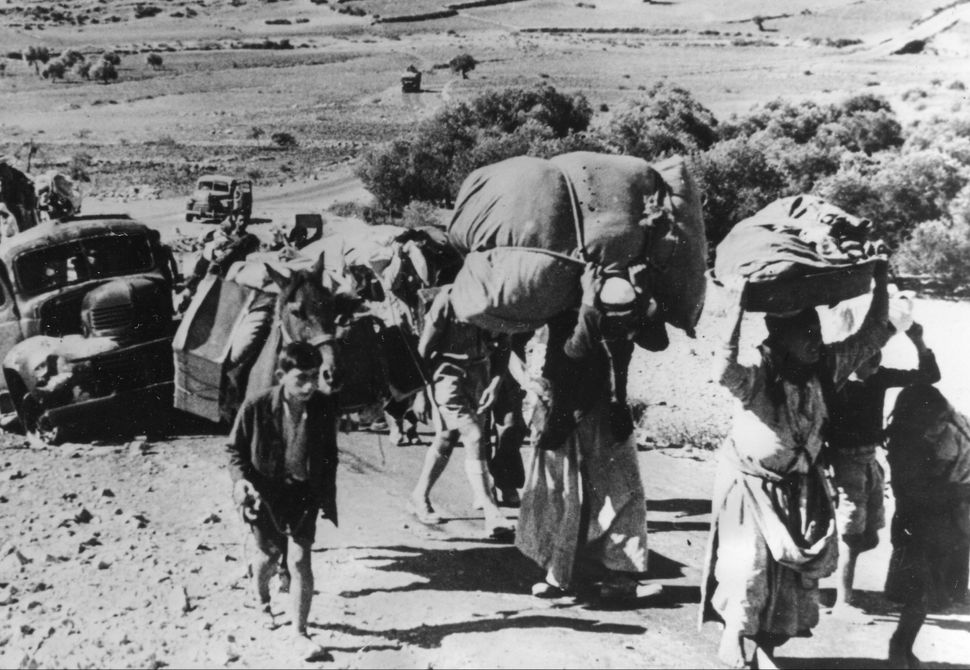 When 71 years ago this month, the creation of the State of Israel led to a mass Palestinian exodus, only about 150,000 Palestinians out of nearly one million who had lived on the territory managed to remain within the new state. Among them were my grandparents.

Palestinians refer to events that unfolded that year as the Nakba, an Arabic term meaning “catastrophe.” But for many Palestinians, the Nakba is not merely a vestigial memory of a tragic past; it is one that is alive, and still awaits justice, perhaps now more than ever.

My father likes to compare it to climate change: It is a man-made disaster, yet those responsible for it continue to deny it.

My grandfather, who survived the Nakba, had two accounts of the tragedy, one personal, the other collective.

My grandfather’s personal narrative was about how he survived the Nakba by a stroke of divine intervention. He was born into a family of peasants from a town near Jaffa, who owned a field just a few miles outside the city. For many generations, the family had lived in relative peace and harmony with the land, to the tempo of daily life spent between the town and the field. In this way, they endured the Ottomans, the British, and the early Zionists.

Then the war began, and things started to unravel. It was a balmy spring in 1948, and whole families were working in the fields, ploughing, hoeing, furrowing, singing to give rhythm to their labor and keep their spirits from dissipating altogether. Word came that the town had fallen to the Zionists, who were killing and sending people into exile, my grandfather recalls. The families, shocked and terrified, camped in the fields and braced for heaven’s mercy. But by the time the Zionist forces found out about them, the war had ended.

The Zionists set fire to the fields and left in haste, to celebrate their victory, my grandfather told us. And the families were allowed to stay behind.

People rejoiced in their fleeting survival. Old men would eat their breakfast, fill their pipes, walk over to the hill, and watch their acres burn down. In time, the fields became a camp, and the camp a village. They have lived there ever since.

And so my family was preserved, tattered but intact. In my grandfather’s telling, they were spared to witness their own ruin, and tell the tale.

The collective saga of the Nakba is somewhat different. In the beginning, there was chaos. Then the exodus began, and people fled by land and sea, clinging to their skeleton keys, leaving behind bountiful harvests and fertile orchards, warm beds and brewed coffee, damp laundry still hanging from their windows, millstones running at their doorsteps. They left in long columns and exodus trails, marching past their deserted houses with tears in their eyes, their towns and villages disappearing rapidly behind them.

My grandfather never tired of recounting that story. Like his family’s saga, his collective memory of the Nakba was astonishingly biblical, and it was ironically embodied in his favorite imagery: “People had taken their bread hastily before it could be leavened.”

My father, who survived the Nakba by not being born yet when it happened, was born into his own Nakba. Shortly after the war, Israel imposed a military regime on its remaining Palestinian population. It lasted for two decades. Freedom of movement for Palestinians was controlled by Israeli permit requirements and curfews. Men like my father were restricted from seeing their fellow Palestinians and Arabs in neighboring countries like Jordan and Egypt, Lebanon and Syria, in the West Bank and Gaza, and even in other towns and villages inside Israel.

Haunted by the fresh memory of loss and displacement, the first generation of Palestinians in Israel was born into national limbo. Virtually overnight, they became strangers in their own homeland.

To my father, the Nakba never truly ended. But whether out of fear or brutal realism, he refused to bequeath it to his son. He believed that third-generation Palestinians like myself could survive only through ignorance of what had come before. For many years, he managed to silence, suppress, and obliterate the mention of the very word that binds Palestinians together in a shared memory. In his final reckoning, the Nakba must not happen again, even in remembrance.

They say that the shock dulls the pain, which perhaps explains why my father, who was born after the war, was more tormented by the Nakba than his own father, who lived it in the flesh. It also explains why young Palestinians of my generation, who are living the Nakba symbolically and from afar, tend to evoke it as if they were its survivors.

Israel has never officially accepted responsibility for the Nakba. In 2011, the Israeli Knesset went so far as to pass the “Nakba Law,” which bans Palestinians from publicly commemorating their tragic past, and authorizes the finance minister to cut state funding for institutions that mark Israel’s Independence Day as a day of mourning.

Israel seems to be under the perilous illusion that it can write off the national aspirations of millions of Palestinians by simply rewriting history.

But history flows like a river out of the past into the present. As a Palestinian who was born and raised in Israel, and who has inherited the double shock of catastrophe and independence, defeat and victory, erasure and memory, I feel like I am standing in the middle of a bridge where I can see both banks of the river. Perhaps one day Israelis, too, will walk that shaky bridge and see what lies on the other bank.

For seven decades, Palestinians have fought for freedom, justice and liberation –– a national odyssey marked by a quixotic quest for statehood, punctuated by memories of loss and defeat, demise and survival, heroism and betrayal, exile and steadfastness.

To most Palestinians today, both in occupied Palestine, in Israel and in the diaspora, justice also means historical justice, and it begins with the recognition of their tragedy. The haunting legacy of the Nakba teaches us that the road to lasting peace in Palestine begins with this kind of historical reconciliation, and if a true reconciliation is ever to reign between Israelis and Palestinians, Israel must recognize and acknowledge its responsibility for the Nakba.

Today, Palestinians are exhausted, impoverished, dispersed and leaderless. The prospect of Palestinian statehood has never been dimmer, thanks to Israel’s ever-growing expansion into Palestinian land and the proliferation of Jewish settlements in the West Bank and East Jerusalem.

In Gaza, over 1.8 million Palestinians are squeezed into 146 square miles, besieged by both Israel and Egypt, with no end in sight, fearing the looming prospect of a new Israeli invasion.

In Israel, about 1.7 million Palestinians (over 20% of the population) have been downgraded to the rank of second-class citizens, thanks to a host of Jewish-only bills passed by the Knesset.

In Syria, Palestinian refugees captured in the midst of bloody civil war are internally displaced at a constant and terrifying pace.

In the diaspora, exiled Palestinians and their grandchildren are still waiting to return to their homeland, still clinging to their rusty keys, watching their hopes slowly slipping away every year.

For nearly ten million Palestinians, now under occupation or in exile or living unequally in Israel, the Nakba is indeed an ongoing event. Their endurance and persistence as a people against all odds is a miracle of its own.

Seraj Assi is the author of The History and Politics of the Bedouin. He is a visiting fellow at Georgetown University.

My Father Tried To Hide The Nakba – But It Found Me.