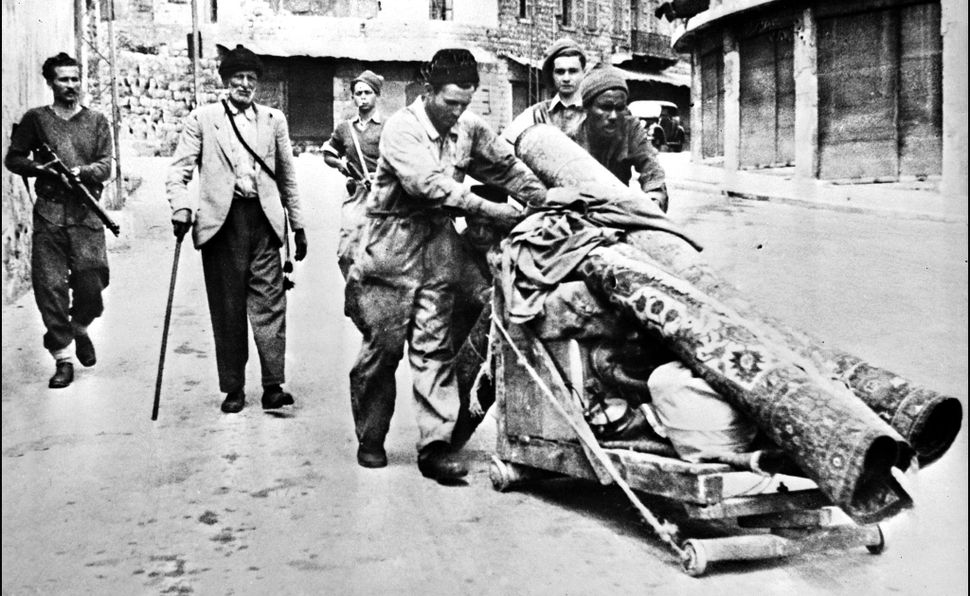 Three members of Haganah, the Jewish Agency self-defence force, escort 12 May 1948 in Haifa three Palestinian Arabs expelled from the city after the Jewish forces took over the harbor 22 April 1948. Image by Getty Images

In a beautifully written column last week, the Israeli journalist Anshel Pfeffer explicated the contradiction at the heart of hasbara: by aggressively advocating for Israel’s right to exist, it implicitly grants that Israel’s legitimacy is actually a matter of debate. After all, he writes, “real countries don’t have to argue they are legitimate.”

As we approach Israel’s 71st birthday this week, we should take the time to acknowledge, perhaps even celebrate, that Israel’s legitimacy is not even slightly precarious.

Not only can the Israel of 2019 endure criticism, of which it’s earned plenty, but it can also survive unscathed an honest accounting of its history, particularly its founding.

The prospect of this raises few eyebrows among academic historians around the world, including in Israel, but it would shake the triumphant hasbara narrative promoted by leading advocacy groups such as StandWithUs.

I believe that a reasonable cross-section of the American Jewish community, stretching from non-Zionists on the left to establishment figures in the center, can come to agreement on the veracity of certain historical facts that were perhaps once controversial but should no longer be. There is no danger to “airing dirty laundry” here and we will all benefit from breathing cleaner political air.

The two facts I wish to focus on are the Nakba, or the active and retroactive expulsion of hundreds of thousands of Palestinians from land that would become the State of Israel, and Israel’s supposed willingness to allow for a Arab-Palestinian state prior to the War of Independence.

As a result of Israel’s 1948 war for independence, around 700,000 Palestinian civilians were displaced from future Israeli territory. Most were forcibly expelled or fled and were subsequently barred from returning. The early Israeli claim that a majority of Palestinian Arabs followed the instruction of political leaders to leave so they could return when the Jewish state was vanquished is not consonant with the accounts of mainstream historians.

Whether or not the Palestinian refugee crisis sprung from a purposeful campaign of “ethnic cleansing” will remain a matter of wrenching acrimony, not least because of the proximity to the Holocaust. However, it is hardly disputable that Zionist leaders, with few exceptions, were largely supportive of population transfer and welcomed the opportunity to build a state without the burden of hundreds of thousands of compatriots opposed to the raison d’être of that state.

According to the historian Benny Morris, “a virtual consensus emerged among the Zionist leadership” in favor of transfer as early as 1937. This included David Ben Gurion and the relatively dovish Moshe Sharett. There were, of course, Zionists who did not accept this, but the leadership of the Yishuv, or pre-state government, certainly did. Even if the resulting transfer was not intended, the brute logic of demographics dictated Israel’s objections to allowing most of the refugees to return.

But what of an independent Palestinian state? Didn’t Israel accept the partition plan?

Hasbara enthusiasts sometimes like to reference Jordan’s control of the West Bank from 1949 through 1967 as evidence that the world did not care about occupied Palestinians as long as Jews weren’t the occupiers. Leaving aside the important differences between Jordanian and Israeli administration of the West Bank, this narrative is misleading.

It’s true that Ben Gurion and the Mapai-dominated Zionist leadership accepted the 1947 UN partition plan, which provided for a Palestinian state on around 43% of the land. But there is evidence Zionist leaders strongly preferred Jordanian rule; it helped that both Israel and Jordan did not want to share a border with a state led by Amin al-Husseini, the Palestinian Grant Mufti.

Less than two weeks before the UN was set to vote on the partition plan, the Jewish Agency, represented by Golda Meir, secretly met with King Abdullah I of Transjordan and conveyed the agency’s support for Jordanian control of the West Bank. No agreement was formally signed, but the intention of Zionist leaders was clear enough: The ideal for them was no Palestinian state at all. The oft-repeated tale of Israeli generosity and Palestinian rejectionism conceals a more complicated story.

Both of these facts paint an unfavorable picture of early Zionist leaders while highlighting the hopeless situation of the Palestinians. Nevertheless, as Zionists, we should acknowledge this history. If we set the bar unreasonably high, such as insisting that the Nakba is somehow overblown, we are unwittingly granting that Israel’s legitimacy today could be diminished by decisions made 71 years ago.

Zionism is not the tale of heroes or villains but of myopic, often desperate, men and women of varying moral standards. While I firmly decline to pass pointless judgment on previous generations of my people who experienced untold horror and oppression, I think it’s time we honestly engaged with the Palestinian narrative on the harrowing facts.