Birthright Has Failed Young Jews, But Not For The Reason You Think. 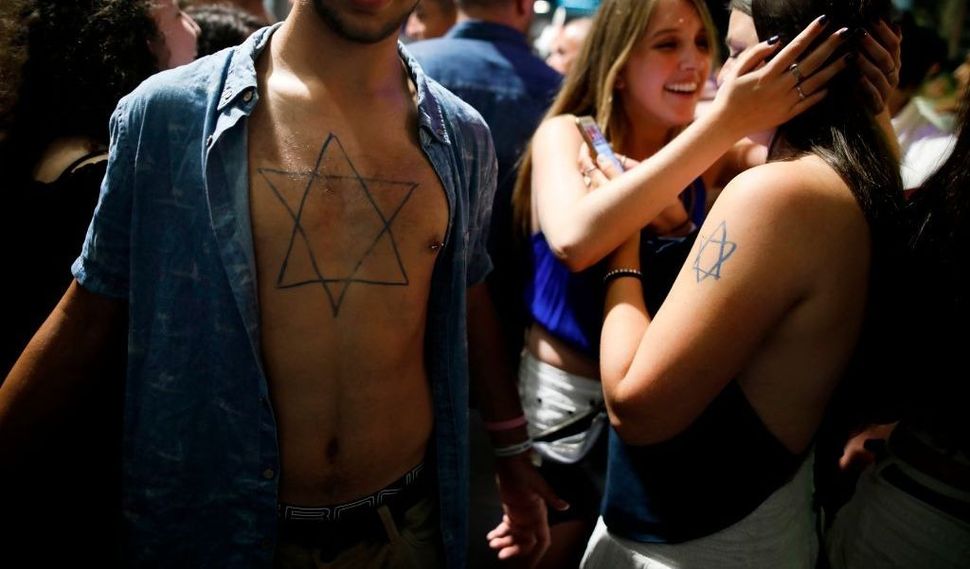 Over the past few years, Birthright, the ten-day Jewish roots trip to Israel, has taken something of a beating. Activist groups like If Not Now and J Street U have made a habit of attacking the trip, which has become something of a sacred cow in the Jewish community; these attacks include campaigns criticizing Birthright’s failure to include the Palestinian perspectives in the trip, which culminated last year in the much-publicized Birthright walkouts, where If Not Now members walked off their trips.

This constant barrage of criticism led others to stand up and defend the institution. Many called the activists ungrateful, spoiled kids who should check their privilege and enjoy the free trip as the gift that it is, or simply not go.

Both sides of the controversy are wrong.

Birthright has in fact failed young Jews, but not for the reasons these activists have pointed out. Birthright’s real failure isn’t how it treats the occupation, but what it’s done to Judaism stateside, here in the U.S. Over the past two decades since Birthright has been around, mainstream American Judaism has quietly undergone a revolution spurred on by the trip — a Birthright evolution, if you will — and it’s neither good nor sustainable.

Birthright was the brainchild of Yossi Beilin, a liberal Israeli politician, who saw it as a way of getting young disaffiliated Jews invested in Israeli democracy. It didn’t take off, however, until billionaires like Michael Steinhardt and Charles Bronfman harnessed the concept to the newly energized war on intermarriage. Steinhardt especially viewed the trip as a way of getting young Jews together at a time when they might be making larger decisions about who to marry and make a life with, in an environment that was fun, exciting, and tied to the Jewish homeland.

The idea was for young people to associate Jewishness with a ten day free party, instead of a slightly alienating, mostly boring, life-long slog.

It’s worked. The trips are immensely popular. Participants are slightly more likely to marry other Jews. Even more amazingly, Birthright quickly transformed from being just one teen travel program among many, to what is arguably the quintessential Jewish identity-making ritual. And in so doing, it also utterly transformed our expectations around rites of passage, as well as the very nature of Jewish life itself.

High intensity and low cost to the participant, the Birthright trip — which has positioned itself as a gateway to lifelong Jewish engagement — inverts the reality of day to day Jewish life.

After all, traditionally, lifelong Jewish engagement is not very high intensity; it’s a lot of work. Before Birthright, the bar/bat mitzvah (the attainment of legal age according to Halakhah) marked a young person’s symbolic entry into adult communal life. A substantial amount of time was invested in bar/bat mitzvah preparation and might require learning the trope system, chanting a Torah or Haftorah portion, as well as possibly writing a D’var Torah or other remarks given during the service. The culmination of these long-term, unglamorous preparations would be a (sometimes lavish) one day celebration.

As a coming of age ritual, Birthright, on the other hand, is essentially all party and no preparation. It’s fast moving, fun, sexy, and asks very little of participants. In other words, it’s nothing like day to day Jewish life, or adult life, in general.

Imagine you’re a teenager hiking up Masada at sunrise, surrounded by a group of your new best friends, all of whom are under-slept, over-stimulated and very, very far from home. Maybe you’ve never thought about your Jewishness much before, but now, what previously seemed irrelevant feels utterly inevitable. Rather than feeling bad about being Jewishly disconnected, you’re suddenly part of a community which is affirming and validating.

Add to that the drama of Jewish history unfolding before your eyes, across some of the most famous, and most highly charged archaeological sites in the world. The narrative of your trip, of your life, has inexorably led to this moment. You belong there, and, according to the name of the trip, it belongs to you.

You’d have to work hard not to have some kind of epiphany.

For Birthright participants, this moment has been designed to elicit what pioneering psychologist Abraham Maslow called a “peak experience,” an extraordinary, ego-transcending moment of great physical or emotional stress, during which the experiencer momentarily connects to the truth of an encompassing wholeness.

In fact, fans of Birthright speak of it explicitly in these terms. As Peter Beinart put it earlier this year, going on Birthright “can be life-transforming. It offers young American Jews a glimpse of the beauty and grandeur of Jewish tradition. It helps them appreciate what they have inherited as they begin thinking about what they want to hand down.”

Maslow placed that self-transcendent experience at the very top of his famous pyramid of human needs. Paradoxically, human beings only become themselves most fully by getting outside themselves.

So it is on a Birthright trip, where a young person is made to understand, possibly for the first time, that they have a place within the global Jewish community. Moreover, they are encouraged to imagine themselves within the majestic span of Jewish history. It is Maslow’s concept of self-transcendence made quite literal, and it is an extremely powerful transformational tool.

Birthright is of course not the first Jewish organization to use a peak experience to make American Jews feel Jewish. I’m too old to have gone on a Birthright trip, but people my age recall that as very young children, we were exposed to gruesome images of the worst war crimes of the 20th century and told that that was our inheritance.

Even if we forgot everything else we learned in Hebrew school (and it wasn’t much), we never forgot that. It seems that our teachers believed that with limited teaching time and minimal family investment in domestic Jewishness, the most effective way to teach us our place in Jewish history was through the literal transmission of trauma. I know I’m not the only student who internalized those experiences as if they were, in some way, my own. This was the shadow of the peak experience: self-dissociation and peak horror.

While the Jewish establishment has moved on from the Holocaust to Israel, it hasn’t replaced the idea that the peak experience is all we can offer young Jews.

It’s a big mistake. Participants may come back with a revitalized perception of their own Jewishness, but no epiphany can transform the things that make American Jews disconnected in the first place: illiteracy, lack of historical consciousness, weak community ties, and geographic isolation.

Even worse, the identity Birthright is supplying is someone else’s. If the establishment strategy for connecting young Jews to each other is inseparable from American Zionist values, a generation of young people will discover that their Jewishness is incredibly fragile and subject to collapse at individual shifts in politics. The problem is not just that Birthright conflates Jews with Israel, but that it conflates Israel with Israelis. Ironically, you can find this double conflation in the rhetoric of the activists who oppose Birthright, too.

That this model of Jewish engagement is unsustainable is apparent in the numbers. Birthright has struggled to keep participants Jewishly engaged post-trip. Ten years ago, researchers found that only four percent of Birthright alumni participated in five or more Jewish activities of any kind in the two to three years after their return. That led to Birthright Next, an American based post-Birthright engagement program that fizzled out in 2015.

Instead of Birthright Next, we now have the Orthodox Union’s “Bring Israel Home’s 100-Day Challenge.” Targeting the same post-Birthright demographic, the program tries to do what everyone else has failed at: make day to day Jewishness compelling outside the peak experience bubble of the Birthright trip. Participants get points for each Jewish action they complete (lighting Sabbath candles, putting on tefillin, volunteering at a Jewish social services agency, etc). 100 points yields an all-expenses paid reunion trip.

This kind of gamification commodifies Jewishness and reduces its constituent parts to fungible points, like Camel Cash, something to be collected and spent on more valuable prizes. At what point do we stop bribing people to do something whose pricelessness should be self-evident?

But by far Birthright’s biggest betrayal of the Jewish community lies in its success. It has has created a new kind of Jewishness that is untransmittable.

For “Peak Experience” Judaism doesn’t just undermine our values; it is patently unsustainable. Each “Peak Experience” belongs to the experiencer alone. It cannot be transmitted to one’s children, except to encourage them to also apply for a free trip when they are of age. Making ourselves more dependent on the largesse of billionaires is indeed a losing strategy for Jewish continuity.

The things that are sustainable, and transmittable, also take the most work, and the greatest investment. I like to think of it as “Geologic Judaism.” We should be aiming to slowly reshape the landscape of American Jewish culture, instead of applying shock therapy to millions of individuals. As with many problems facing us, systemic, not individual change, is the real answer.

Jewishness is so much more than a ten day boozy bus trip, just as it’s so much more than once or twice a year visiting an unfamiliar synagogue. For me, becoming part of the world of global Yiddish culture has given me an incredible community, as well as a fascinating entry point to traditional Jewish life. After twenty-something years, I’m still not bored.

Of course, learning Yiddish, or any Jewish language, takes enormous commitment, as well as resources, and there isn’t one simple formula for American Jewry. But it seems obvious “Peak Experience” Judaism cannot be expected to get young Jews excited about Jewish life between the peaks.

What we need are long term investments in literacy and cultural empowerment, of all kinds.

Rokhl Kafrissen is a playwright and journalist in New York City. Her bylines include The Forward, Haaretz and Lilith and her Rokhl’s Golden City column appears twice a month in Tablet and covers the world of new Yiddish arts and culture.

Birthright Has Failed Young Jews, But Not For The Reason You Think.