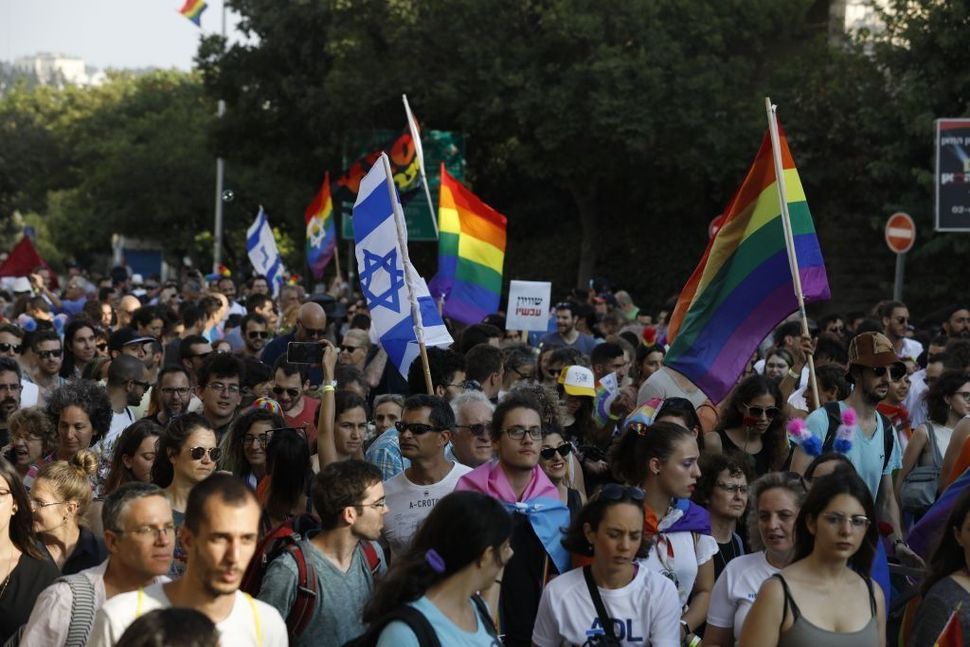 Participants wave Israeli and LGBT pride rainbow flags during Jerusalem’s annual Gay Pride parade on August 2, 2018. – Thousands of people were expected to attend the parade in the holy city under heavy police guard, mindful of a fatal 2015 attack on marchers in the largely conservative city. This year’s parade, the 17th annual Jerusalem march, is being held under the banner of “Pride and Tolerance”. (Photo by Menahem KAHANA / AFP) (Photo credit should read MENAHEM KAHANA/AFP/Getty Images) Image by Getty Images

I remember the first Dyke March, organized by the Lesbian Avengers in 1993 during the LGBT March on Washington. I was there, and I remember feeling that I was finally free — that we dykes could claim all of who we were — our full and complex identities, our bodies, our love, our commitments to equality and justice for all — and be utterly unashamed. It, and the subsequent marches since all over the country, have been profoundly liberating for so many people.

This month, the Dyke March is coming back to Washington, DC, after a 12 year hiatus. It’s claiming its grassroots feel and justice roots, standing with the oppressed and the displaced, and it should. But the DC Dyke March has decided to ban Jewish stars on flags, and that’s a big mistake.

First of all, as Rabbi Danya Ruttenberg demonstrates in these tweets, the Magen David has a history as a Jewish symbol that stretches back at least 1,700 years. Our people have claimed the Jewish star as a sign of pride and identity, and it also has been used against us for purposes of oppression and annihilation.

To assert that the Magen David is a solely Israeli nationalist symbol elides and erases 2000 years of history, what it has meant for and to us in both celebration and devestation, and what it means for so many American Jews today.

Banning Jewish stars on flags is not just anti-Zionist but anti-Semitic. Let’s not forget that we are living in a time of perilous anti-Semitism, in which two synagogues were subject to murderous anti-Semitic attacks. In Brooklyn, where I serve as a rabbi to a large congregation, we are in the midst of an epidemic of random and unprovoked assaults on Orthodox Jews by seemingly unrelated people of diverse backgrounds. Anti-Semitic violence only becomes possible in a climate of normalized anti-Semitism. This decision contributes to that climate.

But that’s not the only problem. A deeper, bigger, and more complicated problem is an overly-simplistic and misguided approach on the Left when it comes to Israel/Palestine. There’s an urge towards purity on the Left, a desire to split the world into good guys and bad guys. I know, I come from the Left.

Let me be clear: Israel is abusing its power. Israel’s policies violate the human rights of Palestinians and threaten the future of the Jewish people, and must change. The occupation of the West Bank must end. There are many Israelis working every day to bring about that change. I just brought 32 people from my congregation to visit Israel and the West Bank, and we met amazing activists on the ground who are dedicated to a just, safe future for both peoples, groups like Breaking the Silence, the New Israel Fund, and so many more.

We Americans can relate to their struggle, as we work every day in this country to change the unconscionable policies and behaviors of our government. Israel is not a theory, and it is not monolithic. It is a real country, with people who disagree with the government and are struggling for a better life and future.