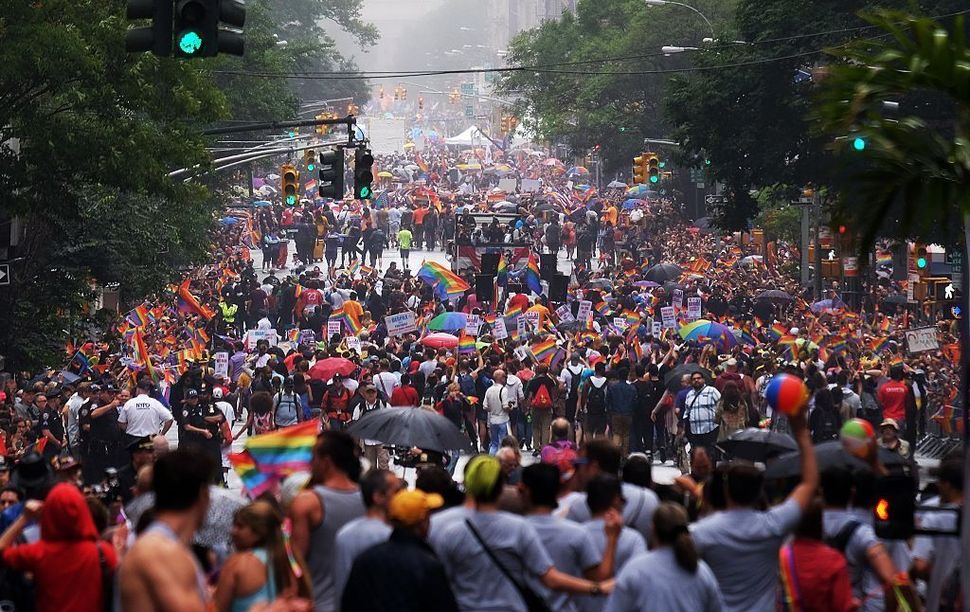 The growing, well-documented rise of anti-Semitism in the past few years in this country is disturbing. But there is something even more insidious when that discrimination comes from supposed friends.

The D.C. Dyke March, an event that claims “to celebrate and center all Dykes,” has decided to ban certain symbols, including Israeli or Jewish Pride flags. The message felt by many is unmistakable: If you are gay and Jewish, you are not welcome here.

This hits home for me on many levels. I am a lesbian who has spent much of my career fighting for the equal dignity of LGBTQ people.

I am also Jewish. My client, the late Edie Windsor, who helped to win marriage equality nationwide, was also Jewish. So was her spouse, Thea Speyer.

When she was alive, Edie loved to march in the NYC Dyke March. In fact, it was a recurrent argument between us; I was always worried she would get hurt in the crush of the crowd or by a hater on the sidelines. Edie always ignored me and marched anyway.

She did so because she loved being in a space where she could openly celebrate everything that made her Edie. She was a dyke and she was Jewish, and she had reason to hope that the spaces where it was acceptable to be both in America would continue to grow over time.

Edie and I spent a lot of time discussing these issues, including on the many Jewish holidays she spent with my family. I am quite certain that, were she still alive, Edie would be devastated by this ill-considered ban on meaningful Jewish symbolism at a march purportedly celebrating the beauty of diversity.

This “friendly fire” is also distressing because I am currently fighting to reclaim a welcoming space for LGBTQ people, Jewish people, people of color, and their supporters who were terrorized on the streets of Charlottesville, Virginia in August of 2017.

Let me be clear: The white nationalists/neo-Nazis we are suing over what happened in Charlottesville, in partnership with Integrity First for America, hate all of us: blacks, Muslims, LGBTQ people, women, immigrants. But the group they hate with the fiercest passion, the people they say they want to burn once again in ovens, are Jews.

The night before they killed Heather Heyer, the Nazis chanted “Jews will not replace us” and “Into the ovens” as they marched through a college campus brandishing torches, a common staple of Nazi events in 1930s Germany. And lest you think the comparison between what happened in Charlottesville in 2017 and what transpired in Germany in the 1930s is extreme, take it from the mouths of the white supremacists themselves, who exhorted their followers, “[W]e need to get out in the streets, and we need to do it bigly… Next stop: Charlottesville, VA. Final stop: Auschwitz.”

Their threats were not idle. We have recently seen concerted domestic terrorism aimed at Jewish institutions. In Charlottesville, they threatened the synagogue. In Pittsburgh and Poway, those with the same ideology went tragically further. As we fight the violent bigots on the far right, it is disheartening that those who purport to be more welcoming are closing their doors to us.

The Holocaust did not happen spontaneously. It was, instead, the crest of a wave of anti-Semitism that had built slowly over decades, crashing down on a generation of Jewish people when its momentum had become overwhelming. Ultimately, it depended upon the silent acquiescence of so many purported allies, as anti-Semitism crept along in plain sight across Europe.

Particularly in times like ours, when white supremacy has been given a reinvigorated platform, we need to stand up to all forms of subtle — but certain — erosion of tolerance, no matter where it comes from.

Roberta Kaplan is best known for successfully arguing before the United States Supreme Court in United States v. Windsor, the landmark Supreme Court case that overturned the Defense of Marriage Act (DOMA), allowing same-sex couples nationwide the right to get married. She is the founding partner of Kaplan Hecker &Fink. Michael Bloch is counsel at the firm.