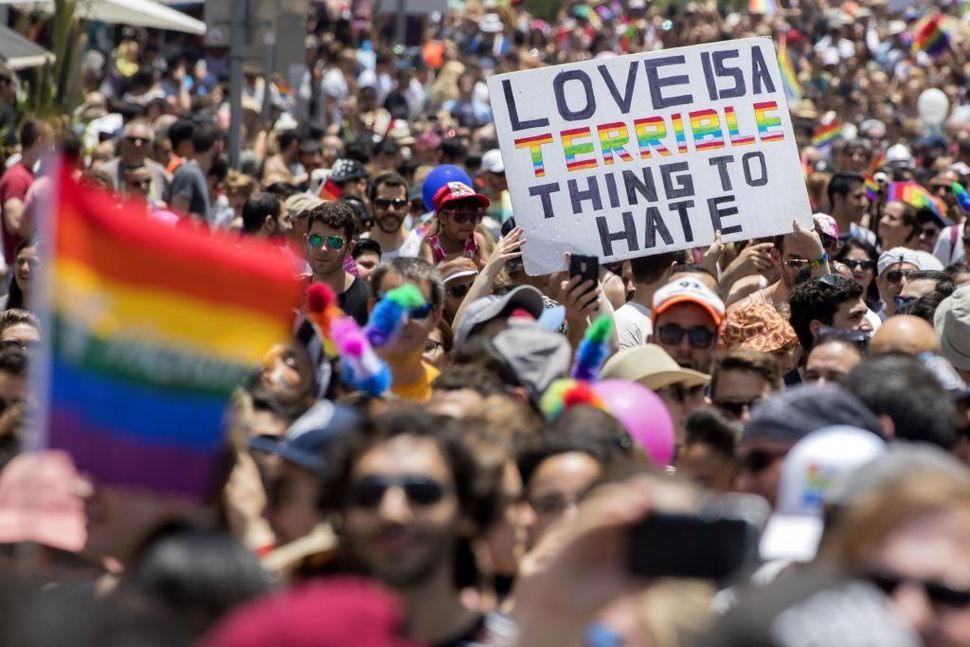 Now imagine this, but with Neil Patrick Harris Image by Getty Images

It was another week in the Jewish world with both more blessings and more pain than we know what to do with. Here are just a few of the gems from the week — stories of Jews and allies who repaired tiny fractures in the world. Good news: It happens, too!

Teachers: Claire Sarnowski, a non-Jewish 14-year-old high school student in Lake Oswego, Oregon, successfully lobbied Oregon lawmakers to make Holocaust education mandatory in curriculum in Oregon schools. Dr. Yvette Alt Miller reported for Aish that, at nine years old, Sarnowski skipped a day of school for the chance to hear Alter Wiener, a survivor of five concentration camps, speak about his experience. Mandatory Holocaust education, Weiner told the young Sarnowski, was his lifelong dream. The two joined forces, lobbying Oregon State Senator Rob Wagner, who co-sponsored a mandatory curriculum bill and brought them to testify in Oregon’s senate on the topic. In late May, SB 664 passed in Oregon’s House and Senate, to be signed into law and go into effect for the 2020-2021 school year. Wiener never learned of the bill’s passage — he died after being hit by a car in December 2018. He was 92. “He was such a generous and kind man,” Sarnowski told Aish. “I remember thinking, ‘How could someone exhibit so much kindness after going through the things that he has been through?’”

Treatment: Dr. Talia Golan of Israel’s prestigious Sheba Medical Center reported promising results for a new cancer treatment in the New England Journal of Medicine this week. Golan treated carriers of the BRCA 1 and 2 mutations who have metastatic pancreatic cancer with a new drug regimen — and found that the rate of progression-free survival doubled for patients who received the drug in a double-blind study. Golan’s findings represent a triumph for “precision medicine,” targeting ultra-specific genetic mutations.

Tel Aviv Pride: Beloved comedian, actor, and personality Neil Patrick Harris was tapped to lead the Tel Aviv pride parade. Sure, you know his Doogie Howser and his Barney Stinson, but NPH repping queer pride at one of the biggest pride events worldwide, in the Jewish state? Legen — don’t make us say it — dary.

Teshuva: Forgiveness…can you imagine? It’s not just a lyric in “Hamilton” — Herbert Diess, the CEO of Volkswagen, told the JTA, “Because of [Volkswagen’s] history, and our history in the Second World War, we have an obligation to care about anti-Semitism and racism. We have more obligation than others. The whole company was built up by the Nazi regime.” This week, Volkswagen announced that it will fund the Anti-Defamation League, making it possible for the storied anti-hate group to return to Europe for the first time in almost two decades.

Torah: The very name of the book of the Torah that Jews will crack open this week is evocative — Bamidbar — In The Wilderness. The People of Israel are in the middle of nowhere. They are long out of slavery but not yet free — they have to journey even deeper into darkness before they come out into the light, into the land. Perhaps it’s fitting that this year, this parsha coincides with the holiday of Shavuot, when we reflect on and celebrate the feeling of homecoming, of bounty. The Book Of Ruth, studied this weekend by Jews around the world, tells of two women who are very much in the wilderness — widowed, starving, and without a people — and of their journey home.

May it be for you a week of going from bamidbar — in the wilderness — to finding your way back home.