How Long Will Black People Have To Wait To Be Truly Liberated? 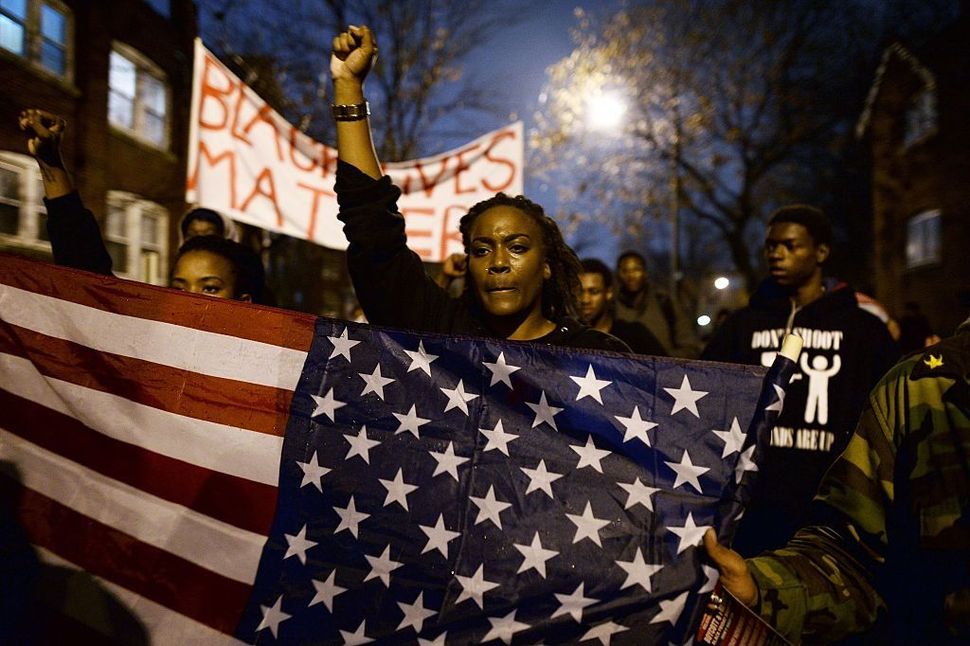 Demonstrators shout slogans during a march in St. Louis, Missouri, on November 23, 2014 to protest against the death of 18-year-old Michael Brown, who was shot dead by police. More than 100 protesters marched peacefully through St Louis on November 23, stepping up pressure on a grand jury to indict a white police officer for shooting dead an unarmed black teenager. Police stepped up security and erected barricades bracing for the worst with a grand jury to decide whether to indict the police officer. Brown was shot at least six times by police officer Darren Wilson in the St. Louis suburb of Ferguson on August 9, inflaming racial tensions and sparking weeks of protests, some violent. AFP PHOTO/Jewel Samad (Photo credit should read JEWEL SAMAD/AFP/Getty Images) Image by Getty Images

With fresh eyes, some might argue there is less Juneteenth to celebrate in 2019 than there was in 1865.

Perhaps that is true. Perhaps not: there’s a bit of selfish audaciousness in that reflection, comparing the lives of 21st century African Americans who, at least, can exercise basic freedom of movement, to the lives of 19th century Black slaves who were in constant, state-sanctioned bondage.

We’ve got smartphones and Netflix in 2019; our ancestors were viciously robbed, on an endless loop, of basic human rights. Yet, we’ll get those who might argue “well, what’s so different about now?” Did anything much change other than the highly digitized, Instagrammicky, gig-netic society we have now?

Few get geeked anymore on the milestones, and this year is rich with them. It’s been 400 years since the first Black slaves arrived on American colonial shores in Virginia, 65 years since Brown v. Board, 55 years since passage of the Civil Rights Act and we’ll be heading next year into a 55th birthday for passage of the Voting Rights Act.

But, the question looms: Where are we now? Or, in some respects, like the grumpy kids during a bumpy road-trip in the back seat: Are we there yet?

It’s easy to feel conflicted about it all. Several centuries later, Black people are no longer in state-sanctioned, whole economy-driven chains and melting under the brutal sun of plantation heat or being chased down by gangs of white-hooded terrorists (that we know of, right?). Yet, we’re still struggling with the ugly and unresolved extensions of that.

Black people are still locked in phantom chains of massive wealth, health, achievement, incarceration and environmental injustice gaps; we are one incessantly growing sand mountain of endless, depressing data streams, one statistical marginalization after another, one form of open slavery switched out in favor of something much more sinister and slow-death because it’s unseen and wrongly assumed as unverifiable.

That explains the grisly timeliness of an anxiously awaited House hearing on the topic of reparations this Juneteenth. It doesn’t go unnoticed that, less than a year ago, there was a time when Black America didn’t receive that kind of top-billing in House hearing rooms — unless, of course, it had something to do with Republicans methodically blocking the Black president’s policy proposals or systematically dismantling something crucial to Black people.

Still, given that the friendlier side of the partisan playground only runs one slice of the federal government, the hearing easily dissolves into over-hyped expectations and false hope. There are signs in every direction of a Juneteenth reparations conversation that goes no further than the Congressional record.

House Democrats, merely placating an unleveraged Congressional Black Caucus, are more decisive at the moment about pushing impeachment than they are pushing legislation — H.R. 40 — that doesn’t ask for much other than the establishment of a commission and federally-backed research.

At most, however, the history lesson will be refreshing since a troubling majority of Americans don’t know the complete story: as a 2018 Southern Poverty Law Center discovered, only 8% of high school seniors knew slavery was the root cause of the Civil War.

Fast forward 65 years later, and not only is the American education system as segregated as it was back then, but cities and states have accepted and perpetuated a rationalization of disparate funding schemes. Not only are there way fewer Black teachers, but the reality of dysfunctional, dilapidated school districts and toxic school buildings is viewed as normal.

Not only are Black students, as a statistical collective, underperforming more than their demographic peers in math, reading, and science, but they are the prime recipients of a vast “school-to-prison” pipeline where unforgiving classrooms become likely conduits towards some form of jail.

Reflecting on 55 years since the Civil Rights Act and nearly the same for the Voting Rights Act (which happened a year later), and there is little time for relaxation and Emancipatory nostalgia as a shadowy form of unofficial neo-Jim Crow gradually finds its place in 21st century America.

Black unemployment is more than double that of national unemployment, in some places—such as the nation’s Capital—actually several times the average. Everything from resurgent employment discrimination to high rates of bad credit (the form of slavery no one talks about) to lack of affordable housing to the proximity of vulnerable communities to sources of pollution shows a persistent pattern of systemic brutality that won’t be cleaned up anytime soon.

Juneteenth Eve is scarred by a racist president officially launching his re-election campaign for 2020, a year we expect another destructive voter suppression blow on the Voting Rights Act during its 55th anniversary. And just weeks after ordering his Treasury Secretary to unflinchingly and unforgivingly remove Harriet Tubman, abolitionist freedom fighter, from the $20 bill, this Juneteenth forces some to reassess the “holiday’s” true meaning.

How Long Will Black People Have To Wait To Be Truly Liberated?