Democrats Should Lean In To The Israel Question At The Debates. Here’s How. 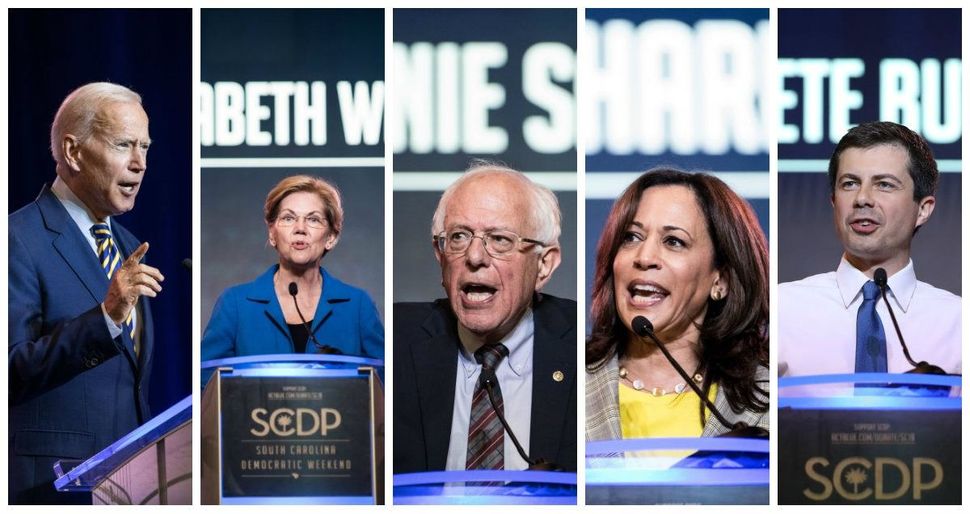 With the first primary debates coming up this week, the large field of 2020 Democratic presidential candidates are busy preparing to share their policy visions and views on a wide range of issues.

When it comes to the US-Israel relationship, the Israeli-Palestinian conflict and US foreign policy in the Middle East, some candidates may be feeling a bit of trepidation. Elected officials have sometimes been made to fear that one word wrong on these topics could do them real political damage.

But in 2019, candidates shouldn’t fear talking about Israel. Instead, they should view it as a major opportunity to rally the vast majority of Democratic voters behind them — by promoting a clear, popular vision of strong, principled American leadership that can advance our long-term interests and help secure a better future for both Israelis and Palestinians.

If the Democratic contenders are asked about Israel on Wednesday and Thursday nights, here are five important tips they should keep in mind:

Make clear you support both Israelis and Palestinians

Candidates should reject the false dichotomy of “pro-Israel or pro-Palestinian” and make clear that Israel’s ultimate security as a democratic homeland for the Jewish people depends on the Palestinian people obtaining full self-determination, civil rights and equality in an independent state of their own, alongside Israel.

An overwhelming 81% of Democrats believe that “someone can be critical of Israeli government policies and still be pro-Israel.” Most Democrats have a positive view of Israel (+25 percent favorable). But they can’t stand the far-right rhetoric, ideology and policies of Prime Minister Benjamin Netanyahu, whose favorability polled at -27%.

Candidates should emphasize that they support the state of Israel and Israel’s people and will do all that they can to ensure our ally’s security. At the same time, they should rebuke the destructive policies that the Netanyahu government is carrying out in the West Bank. They should call out the harmful impact of Trump-Netanyahu ideological partnership, which promotes the personal political interests and far-right agenda of the two leaders at the expense of long-term US and Israeli interests.

Don’t be afraid to talk about settlements and occupation

Talking about Israel’s counterproductive policies in the West Bank used to be treated as anathema by some political pundits and advisers. Those days are over. Today, it’s obvious that the Netanyahu government is openly working to expand settlements, entrench the occupation and prevent the possibility of a two-state solution. With the encouragement of US Ambassador David Friedman, they’ve even begun to openly discuss formally annexing Palestinian territory.

These actions trample on Palestinian rights and aspirations and seriously imperil Israel’s future. A presidential candidate who hopes to promote diplomacy and peace in the region needs to be willing to challenge these policies — and make clear that they won’t shy away from attaching a cost to potential Israeli annexation in the West Bank. 69% of likely Democratic primary voters said they were less likely to support a candidate who says that the US “should continue financial and military aid to Israel without any restrictions, regardless of whether Israel expands settlements or annexes Palestinian territory.”

“Shared values” should be more than a platitude

It’s long been understood that the extremely close and valuable relationship between the US and Israel is rooted in shared interests and shared democratic values. Unfortunately, by challenging democratic norms and pursuing politics of fear and intolerance, President Trump and Prime Minister Netanyahu are now undermining the values that have kept both countries strong over the past seven decades.

Candidates should explain how they’ll strive to defend and restore support for those values, and to ensure that the US-Israel relationship will once again work to promote peace, justice, tolerance and equality.

Whether it comes to solving the Israeli-Palestinian conflict, dealing with Iran or addressing many other global challenges, presidential contenders should be emphasizing the importance of working with our allies towards diplomatic solutions.

According to a poll this year by the Center for American Progress, a majority of Americans believe that “the US should prioritize economic and diplomatic efforts, rather than military action, to protect our interests around the world.” J Street’s poll of Democrats found that 72% support re-entering the JCPOA nuclear agreement with Iran — virtually the same level of support we saw in our most recent poll of the American Jewish community.

Voters understand that starting disastrous wars, alienating allies and tearing up negotiated agreements makes us less safe. Candidates should match their enthusiasm for diplomacy and their deep skepticism of armed conflict.

Democrats Should Lean In To The Israel Question At The Debates. Here’s How.