I Was One of 36 Jews Arrested Protesting ICE. Never Again Is Now. 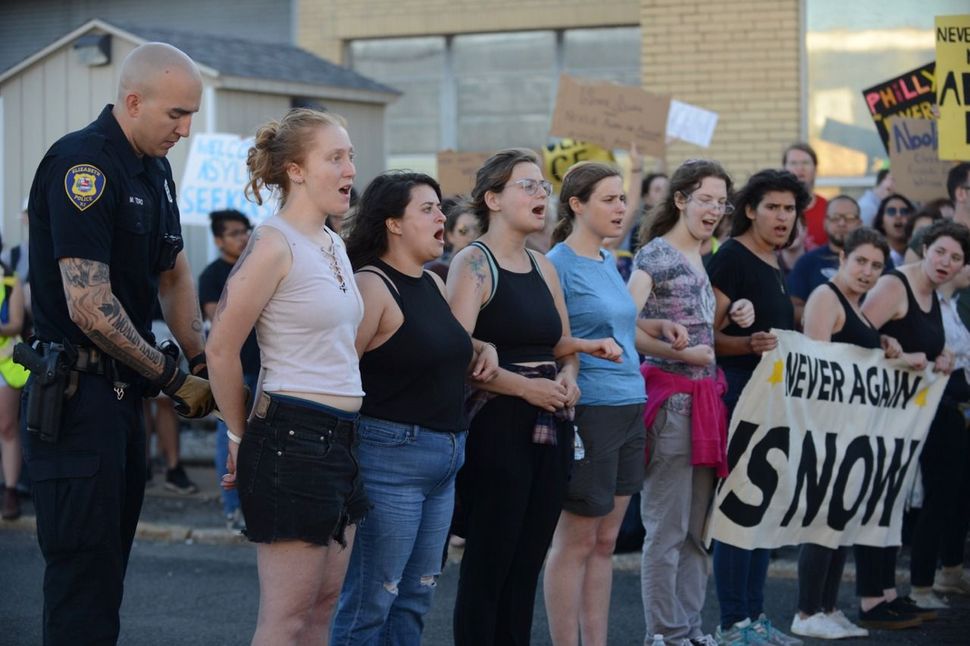 The first conversation I had with my father about the Holocaust is seared into my memory. I was maybe seven or eight when he explained to me that millions of people had been murdered because of their religion, where they came from, who they loved, or because they were disabled.

I was among the 36 Jews arrested Sunday outside the ICE detention center in Elizabeth, New Jersey as part of the Never Again Action. We came together from all across the country – from California and Washington State, from Colorado and Missouri – to protest and put our bodies on the line because we see the same pattern my father described unfolding today.

Many people don’t know what is happening.

Some people don’t care or agree with this administration’s xenophobic agenda.

But most people simply haven’t been trained to see the warning signs, and things are getting worse so slowly that they won’t notice until it is too late.

Unless we do something.

We Jews know in our ancestral memory what the precursors to ethnic cleansing look like. They look like roundups and mass deportations. They look like detention camps where “undesirables” are concentrated and segregated away from the general population — also known as concentration camps. They look like dehumanizing conditions where vulnerable people die of exposure and medical neglect.

They look like what is happening to undocumented people, asylum seekers, and refugees in America today. It’s really that simple.

And so I have a few questions for my fellow Jews who claim that we have somehow diminished the term “Never Again” by using it to refer to the disaster unfolding before us:

Does it have to get to the point of medical experiments and mass graves, gas chambers and burning pits before you will compare it to the Holocaust? Do we have to let it get that bad before we learn the lessons of history and take action as God commands us?

Do you really believe, given the conditions in the camps and the glee with which many of the perpetrators are discussing the dehumanization of their victims, that these people are capable of checking themselves before it gets to that point?

There are many people in America today who still do not know what is being done in our names. But if we Jews all speak with one voice, from our ancestral experience, nobody will be able to say they didn’t know, or that it crept up on them too slowly for them to notice.

We won’t be able to change the hearts and minds of those who truly do not care or who agree with the way things are unfolding; but we invite every decent person who takes the Holocaust seriously to get involved now.

Before it’s too late.

I Was One of 36 Jews Arrested Protesting ICE. Never Again Is Now.