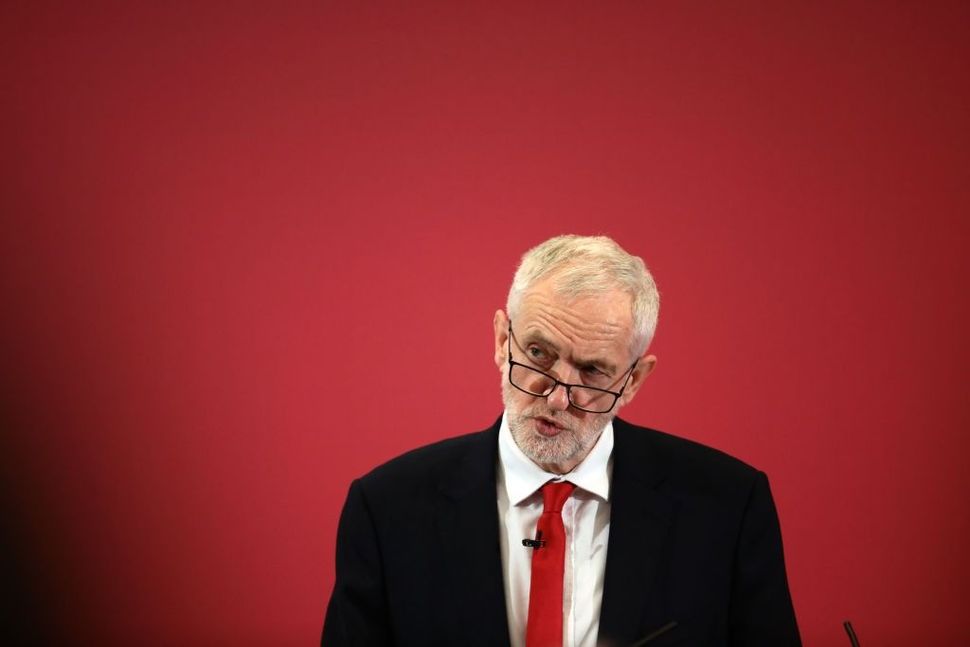 CHATHAM, ENGLAND -MAY 09: Labour Leader, Jeremy Corbyn Launches Labour’s European Election Manifesto at The Drill Hall Library, University of Kent Medway Campus on May 9, 2019 in Chatham, England. British voters will go to the polls for the second time this month as they choose MEPs to represent them in the European Parliament. Had Brexit gone to plan the UK would have left the European Union on March 29th this year and woudln’t be taking part in these elections. (Photo by Dan Kitwood/Getty Images) Image by Getty Images

“I wanted to work for the party for the same reason I joined as a member,” she told the Guardian. “I believe and still believe the Labour Party can be the greatest force for fairness, equality and anti-racism.”

By June 2018, working there felt “like being pincered,” she said. It felt like the Labour leader Jeremy Corbyn’s office was both “blaming us for not having dealt with anti-Semitism but also completely hindering our ability to do so.”

Her caseload only increased, as did the feeling that tackling anti-Semitism in the party’s rank-and-file had become impossible.

She left her job, signing off with depression and anxiety.

Withers Green was far from the only employee of Labour’s Disputes Office for whom the toll of working there proved unbearable, as the BBC’s investigation, “Is Labour Anti-Semitic?”, demonstrated when it aired Wednesday night.

Sam Matthews, the office’s former head, told the Jewish Chronicle that he “actively considered committing suicide” before he resigned in June 2018, “trapped” by orders he felt uncomfortable carrying out and a party general secretary who didn’t listen to him — Corbyn ally Jennie Formby.

The investigation’s other significant revelation was the extent to which Corbyn’s team — not just Formby but also his chief of staff Karie Murphy and director of communications Seumas Milne — were reportedly actively interfering in high-profile cases of anti-Semitism, especially those involving Corbyn’s comrades and allies, subverting the work of the independent Disputes Office.

The investigation confirmed something those of us who have been following this affair since Corbyn ascended to the Labour leadership in September 2015 either knew or feared: Jeremy Corbyn and those close to him are fundamentally uncommitted to removing anti-Semitism from the Labour Party. Worse, they have reportedly been working behind-the-scenes in order to support and give succor to the very anti-Semites who litter its membership.

Part of the problem, as Rachel Shabi accurately observed, is that Corbyn as his co-conspirators essentially see accusations of anti-Semitism as a factional issue, leveled by supposed Blairites, Brownites, and centrists against the party’s Corbynites.

Anti-Semitism, by this logic, is not a genuine problem but rather a volley from the opposition that has to be countered. Out of this worldview there is no escape. If every charge of anti-Semitism is a lie, by definition there cannot be anti-Semitism within the party.

In April 2016, Corbyn’s friend and ally Ken Livingstone had his membership suspended for arguing that Adolf Hitler was a Zionist. Corbyn probably believed his response at the time, that what was taking place inside Labour was “not a crisis.”

It was a display of pure factionalism, and betrayed the wont of Corbyn’s office to defend itself at all costs. Both of these traits were again in evidence in how Corbyn chose to respond to the BBC’s investigation. Before it even aired, they were sending out talking points to so-called “outriders” — supportive influencers on social media — while surrogates like the pro-Corbyn Momentum group were sharing thrown-together videos Trumpily questioning the public broadcaster’s impartiality.

Ohhhhh this is bad. Pre-empting the BBC’s Panorama episode tonight on Labor’s antisemitism scandal, Momentum put together a hit-job on the BBC’s reporter. Super grim. https://t.co/PcCABAmmIR

The leadership refused to put up any senior official to the BBC for interview, instead sending shadow cabinet member Andrew Gwynne, who was about as insightful and illuminating as a sack of potatoes. Corbyn’s office’s written responses to the BBC’s inquires, meanwhile, managed to be in turns misleading, haughty, and dismissive.

But it’s not just a question of personnel. The truth is, anti-Semitism is integral to New Left thought. Maxims and tropes like the idea that Zionism is a racist ideology and Israel a racist state, that Israel is doing unto the Palestinians what was visited upon Jews by the Nazis, or that Israel and its allies have undue influence in Western politics and societies have been essential to the British far-left for decades.

But when it comes to their own racism, Corbyn’s allies are blinkered. For them to acknowledge that anti-Semitism is a problem in the Labour Party would be to recognize that the problem comes from within and not without.

This is particularly true, of course, of one man in particular: Jeremy Corbyn. It was he, after all, who described Hamas and Hezbollah as his “friends” and invited the anti-Semitic hate preacher Raed Salah to tea at the Houses of Parliament.

It was he who suggested on Iranian state television in 2012 that Israel was behind a terror attack that resulted in the deaths of Egyptian border guards.

It was he who backed an anti-Semitic mural in east London, which portrayed hook-nosed Jewish financiers playing Monopoly on the banks of the downtrodden.

But coming to terms with the implications and consequences of his deeply-held beliefs and his career-long bonds and associations requires a kind of self-examination and self-excavation of which he simply isn’t capable.

At the end of the BBC’s investigation, the journalist John Ware posited that the only person with the political capital to end Labour’s anti-Semitism crisis was Corbyn himself. But this supposition misses the point entirely.

Corbyn and his allies can never be the solution to the problem of anti-Semitism in the Labour Party because they are not only its cause but also the main obstacle to its eradication. Corbyn is the lodestar that guided these far-left anti-Semites to Labour in 2015 and the locus around which they continue to adhere.

Were it not for him and his particular brand of far-left anti-Semitic politics, Labor would likely not be suffering from the crisis of anti-Semitism it is experiencing today.

The struggle to eradicate anti-Semitism and anti-Semites from the Labour Party and remove Corbyn and his flunkies from their leadership roles are thus one and the same. Board of Deputies of British Jews President Marie van der Zyl said on Wednesday, “It is hard to escape the conclusion that Corbyn, Milne and Formby are personally responsible for having turned a once great, anti-racist party in to a cesspit of anti-Semitism.”