Jeremy Corbyn Is Gaslighting The Jews 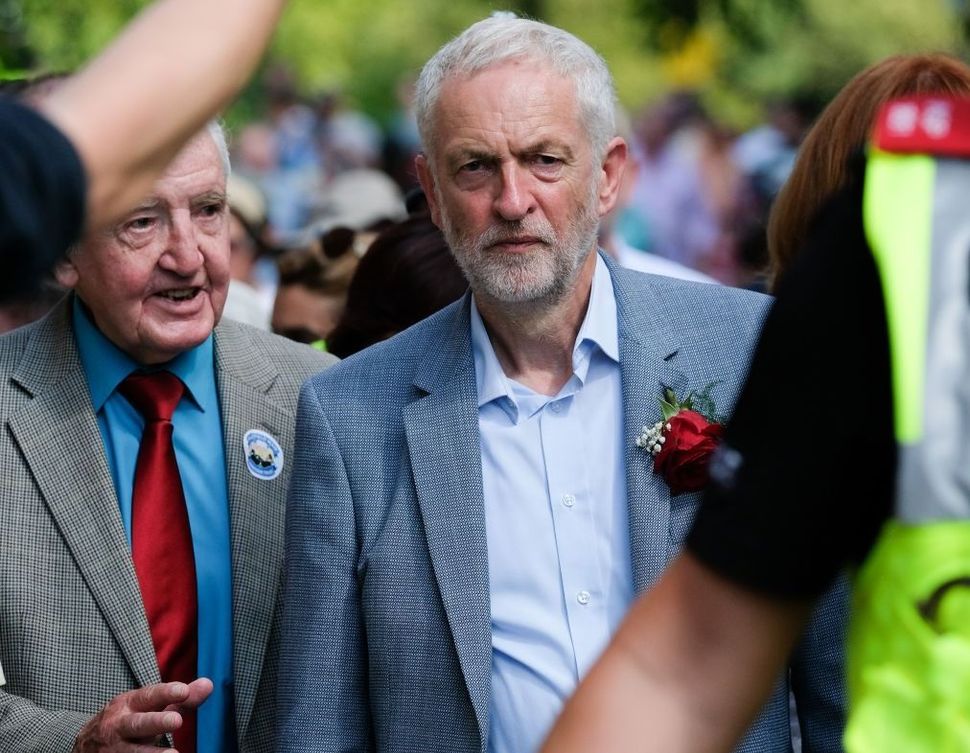 Labour Leader Jeremy Corbyn walks through crowds after delivering his speech during the 134th Durham Miners’ Gala on July 14, 2018 in Durham, England. Image by Getty Images

Last Friday, upon the start of Shabbat, Britain’s Labour leader Jeremy Corbyn published an op-ed in The Guardian confronting accusations of anti-Semitism under his watch as leader of the party.

What starts off as a welcoming letter of understanding quickly devolves into an exercise in distortion and excuses.

Instead of acknowledging the trauma he and several key members of his party have caused for Britain’s Jewish community, Jeremy Corbyn dismisses criticism as “overheated rhetoric.” He downplays the severity of the problem and casts all of the blame on his colleagues while taking no personal responsibility for his role in this mess. He also leaves out the most important words from any letter of apology: the words “sorry” or “apologize.”

For a person with a long and unambiguous history of associating with anti-Semites to recuse himself of any wrongdoing is galling. Like any master manipulator, Corbyn uses his position of power to distort reality and make the victims look like the aggressors, and the aggressors look like the victims. It’s the same tactic that abusers of sexual assault use to reinforce their victims’ trauma, making those people question their memory and perception of what really happened.

The erasure of abuse is often as disturbing as the abuse itself. This is the type of manipulation we’ve seen from Trump, but more is expected of the progressive leader (and possibly the next prime minister) of the U.K.

For some background, here are just some of Corbyn’s most disturbing incidents of anti-Semitism:

1) He associated with a Holocaust-denying group for 10 years.

2) He referred to Hamas and Hezbollah as his “friends.”

3) He organized an event where Israel was likened to Nazis.

4) He sponsored a conference that pledged “to eradicate Zionism.”

5) He called for Hamas to be removed from Britain’s banned terror list.

6) He was discovered to be a member of three secret anti-Semitic Facebook groups.

It’s not hard to see why the Jewish community does not trust him. Under his watch, he’s helped elevate anti-Semitism into mainstream political discourse, making the Labour Party one that radiates hate toward Jews.

The reason he is addressing this issue — for the second time in about three months — is because the Labour Party refuses to adopt the IHRA definition of anti-Semitism in full, opting instead to modify sections pertaining to Israel.

Corbyn claims that only “half of one example out of 11” have been changed, but this is not true. The Labour Party removed 4 of the 11 guidelines, those being:

1) Comparing contemporary Israeli policies to those of the Nazis.

2) Suggesting that Jewish people in the Diaspora are more loyal to Israel than their home country.

3) Holding Israel to different standards than other democratic countries.

4) Denying that Jewish people have a right to self-determination — for example, “by claiming that the existence of a State of Israel is a racist endeavor.”

By not including the definition in full, the Labour Party waters down the original guidelines and safeguards people with vile hatred toward Israel from being properly denounced as anti-Semitic. Corbyn claims that their revisions simply meant to protect free speech in regards to criticizing Israel, but the IHRA guidelines already state that criticism “similar to that leveled against any other country cannot be regarded as antisemitic.” So, for them to feel the need to further revise suggests that they have a bigger problem than just criticizing the country’s policies.

This is especially damning to British Jews because 90% of them support Israel’s right to exist as a Jewish state.

Corbyn’s failure to address these issues has been denounced by the Jewish community, including the Board of Deputies of British Jews, the Jewish Labour Movement, the three major Jewish newspapers, as well as by 68 British rabbis who signed a letter of condemnation.

In his op-ed, Corbyn claims that he wants to hold dialogue with Jewish leaders to make things right, yet he ignores the fact that Jewish communal bodies have been trying to do this for months — only to be rejected by Corbyn himself. In April, he walked out of a parliamentary meeting on anti-Semitism. In May, the Jewish Labour Movement was barred from attending the NEC meeting on anti-Semitism. And in July, he chose not to attend the PLP emergency meeting on the same topic.

He did meet, however, the Emir of Qatar, who has been accused of funneling millions of dollars into terrorist and criminal regimes throughout the Middle East. If Corbyn values dialogue, why did he ignore calls from the Jewish community at every opportunity?

There’s simply no other word for it: he’s lying.

His op-ed reads like the poem, “The Narcissist’s Prayer”:

And if it did, it wasn’t that bad.

And if it was, that’s not a big deal.

And if it is, that’s not my fault.

As a good rule of thumb:

When the majority of a marginalized group say something is bigoted, you should listen.

If a gay person says something is homophobic, you should listen.

If a person of color says something is racist, you should listen.

If a Muslim says something is Islamophobic, you should listen.

If a woman says something is sexist, you should listen.

And if a Jewish person says something is anti-Semitic, you should listen, too.

Jeremy Corbyn Is Gaslighting The Jews