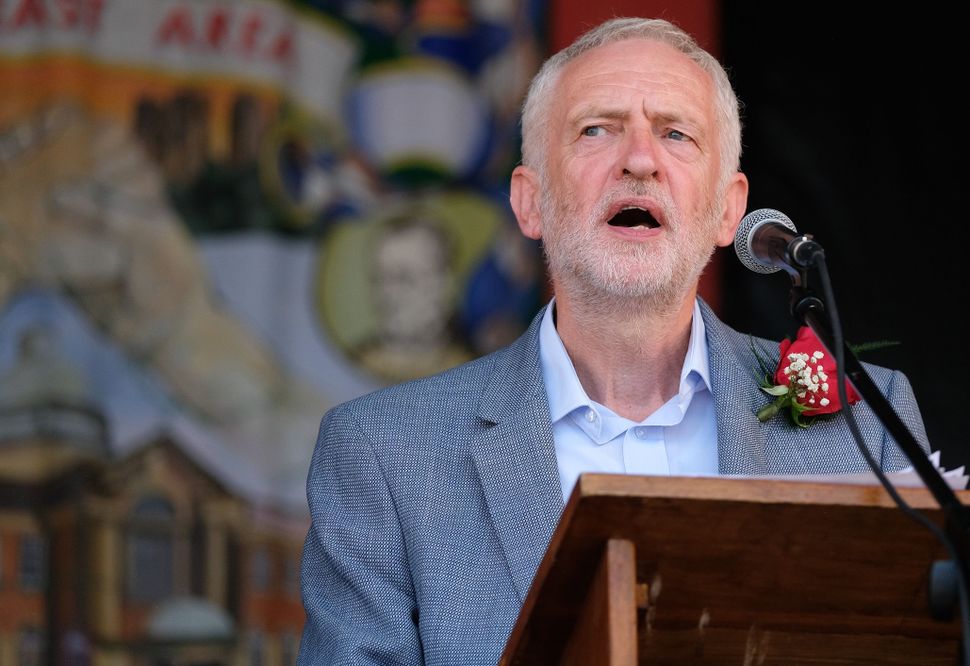 Over the past two weeks, Jeremy Corbyn, the leader of Britain’s Labor party, has faced renewed accusations of anti-Semitism.

This latest escalation of the seemingly irresolvable brouhaha comes in the wake of a new code of conduct and definition of anti-Semitism that Labor has taken on to address protests from Jewish groups. But far from providing a resolution, Labor’s attempt to address their anti-Semitism has itself been branded anti-Semitic.

This is because the definition of anti-Semitism that Labor has introduced differs from the widely accepted one, written by the International Holocaust Remembrance Alliance, in one crucial way: It leaves out a handful of the examples of anti-Semitism which concern demonizing Israel.

In so doing, only caused more outrage.

The adoption of the code was immediately greeted with a letter of criticism signed by 68 rabbis from across religious denominations, claiming to speak with “one Jewish voice.” A week later, three Jewish newspapers took the criticisms a step further when they published a joint editorial claiming that a Corbyn-led government would pose an “existential threat to Jewish life” in Britain.

A worse and more ridiculous response to a code of conduct on anti-Semitism is hard to imagine.

Indeed, we Jews on the left, who have been fighting anti-Semitism in our movements for far longer than Corbyn has been Labor leader, can see that the new Labor code of conduct is a very positive step in actually tackling the problem.

As Corbyn himself pointed out in an op ed on Friday, the party’s code of conduct does in fact repeat the IHRA definition of anti-Semitism, removing only four of the eleven examples of anti-Semitism offered by the IHRA to illustrate the definition. And all four examples are, as Corbyn pointed out, dealt with elsewhere in the document.

There is no place for antisemitism in the Labour Party. We must drive it out of our movement for good. pic.twitter.com/V1voY75yz4

Similarly, the Labor definition leaves out as an example of anti-Semitism “denying the Jewish people their right to self-determination e.g., by claiming that the existence of a State of Israel is a racist endeavor.” The first half of this is covered in point 12 of the new code of conduct, which insists upon “respect for the principle of equal rights and self-determination of peoples,” including that of the Jewish people. “To deny that right is to treat the Jewish people unequally and is therefore a form of anti-Semitism,” states Labor’s code of conduct.

At the same time, the Labor code draws the important and often unrecognized distinction between acknowledging the right to self determination, and “considered debate and discourse about the nature or content of [that] right.”

To say that the Israeli state is and was nothing but a racist endeavor, to deny the reality that in 1948 the state of Israel also provided refuge for thousands of Jews who had been persecuted, murdered and rejected by the racist states of Europe, would indeed be anti-Semitic. It is of course important for critics of Israel to also acknowledge that it continues to represent liberation and refuge to thousands of Jews worldwide, an acknowledgement that is encompassed in Labor’s code of conduct.

On the other hand, to say that Israel, which is founded on the principles of ethno-nationalism, includes an inherently racist component is not only not anti-Semitic; is true.

This is not to single out Israel; almost all modern nation states were to some extent founded on ethnically exclusive and therefore racist principles, and many states including the U.S. acknowledge this in their official histories.

As more and more Jews in Britain and elsewhere recognize the racism in Israel’s current and historical policies, smearing anyone who points this out as an anti-Semite is not only wrong but risks ostracizing Jews from their own communities.

Furthermore, to deny the reality of the racism inherent in Israel’s ethno-nationalism is to gaslight the Palestinian struggle not only regarding their right to self-determination, but also regarding their basic human rights.

Another one of the IHRA examples of anti-Semitism that Labor’s definition leaves out is applying a double standard to Israel by requiring of the Jewish State “a behavior not expected or demanded of any other democratic nation.” There is of course often a hostility in the way Israel is so frequently singled out; even as a non-Zionist, I am often aware of that. The U.S. and Britain are arguably far more responsible for the great evils the worldover, including those afflicting the Palestinians.

And yet, to act like calling out Israel’s democratic failures, so grotesquely on display with its new Nation State bill, is an anti-Semitic act is to demand that Israel be held to a lower standard in a sea of whataboutism.

This brings me to the final example, “drawing comparisons of contemporary Israeli policy to that of the Nazis.” Particularly following the new law and recent persecution of Israeli and Jewish leftists, comparisons between Israel and fascist regimes have never been more tempting. Such comparisons are not inherently anti-Semitic, for they are not based on hatred of Jews but on a general tendency to turn to history to explain the present.

They are, however, a-historic. And when Israel is compared to Nazi Germany, these comparisons are often intended to cause pain and offense to Jews.

Indeed, the Labor code does find that such comparisons should be avoided; it simply resists the urge to deem them anti-Semitic. And they are right. Calling these comparisons anti-Semitic is a category error, and prevents discussions which are important if carried out sensitively.

All of the above IHRA examples could, in some contexts, be anti-Semitic, as can many other speech acts that are not themselves acts of anti-Semitism.

The examples excluded from Labor are also examples that are frequently used to shut down legitimate debate on Israel, even within Jewish communities, where such examples have been used to brand non-Zionist Jews like myself “unacceptable.”

Even worse, un-nuanced definitions of anti-Semitism are frequently used to shut down Palestinian voices in British society.

To demand that the IHRA standard be met or Jews face an “existential threat” means that even here in the diaspora, our safety and security is still dependent on the silencing of another people.

That is simply not something I want to be part of. If your definition of anti-Semitism instantiates racial discrimination against Palestinians, it’s worthless.

It is beyond parody to suggest that by slightly altering examples of anti-Semitism to provide a more nuanced understanding the Labor party under Corbyn threatens Jewish existence. Indeed, this whole outcry only demonstrates the extent to which Jewish identity in Britain is tangled up with the state of Israel.

No doubt, this is something that needs to be sensitively considered. But at the same time, it can cause debates about anti-Semitism to become so complicated that addressing anti-Semitism starts to feel impossible.

Especially now, this is an untenable situation. Jewish people in the Labor party and in society more generally are experiencing increasing levels of day-to-day anti-Semitism. But this has everything to do with Brexit, the racism of the Tory government and the swing of global politics to the right.

For a Jewish community that truly wants to eradicate anti-Semitism, an honest rather than a hysterical look at Labor’s definition would serve us all well.

The Labor code of conduct, unlike the IHRA examples, recognizes that the overlaps between anti-Zionism and anti-Semitism are subtle and difficult to navigate, and cannot be encapsulated in simple examples. While victims should always be heard and allowed to define their experiences, it gets complicated when a people’s definition of racial hatred includes commentary about a particular nation state — especially one that is guilty of repeated human rights abuses.

I believe that Corbyn and the Labor Party leadership are doing their best to address anti-Semitism; attacking them is certainly not going to make a two thousand year old problem go away.

It’s time to stop arguing over how to define anti-Semitism and who has the right to do so. Instead, we must start working across the political spectrum to eradicate it.

And for the Jewish community, it is also time think about what it actually means to be safe in diaspora, and to start the process of untangling our own sense of identity from that of the Israeli state, however difficult and painful that may be.