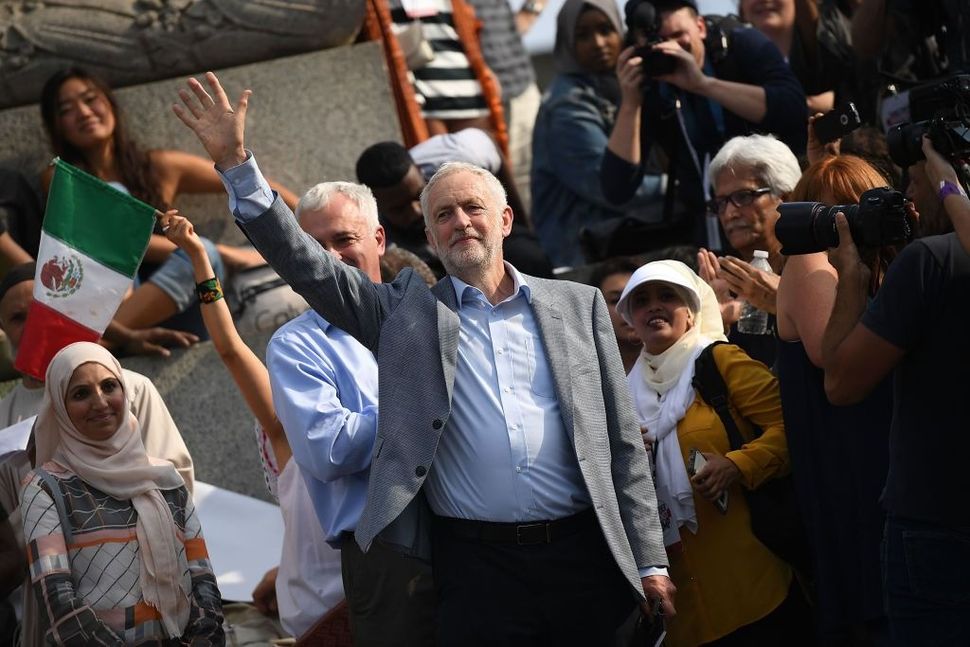 Last week, the three Jewish newspapers in Britain made a point of publishing the same front page editorial to highlight the “existential threat to Jewish life” that a Jeremy Corbyn-led government would pose to British Jews.

I am a life-long Labour supporter, a 52-year-old British Jew, born and bred in the outer suburbs of London in a traditional Jewish family.

But does he represent an existential threat to me and other Jews? Certainly not. Is he anti-Semitic? No.

Is Corbyn an old school ’70s British Leftie who supports every country in the world against the imperial aggressors (including the U.S., the U.K. and Israel)? Absolutely. Witness how he would rather listen to the point of view of Iran, a country that he sees as dominated by the West until the Islamic revolution in 1979, than to Israel, a country he sees as propped up by the U.S. But does he want to ban bagels, seders and “Curb your Enthusiasm”? No!

Is he surrounded by even crazier people? Yes. And it is these people who are being caught out being anti-Semitic. They are the ones who do need to be rooted out of the party. These are people I have known throughout my life, found on the left of the Labour Party who are forever fighting the system and the Man, whomever he is. And in Corbyn’s ascent, they have ascended, too.

But Corbyn has not said or done anything I find anti-Semitic or offensive. Recently, it was revealed that he said on Iranian TV that an Islamic terrorist attack was instigated by Israel. This was pounced upon as anti-Semitic. Why? It’s anti-Israel, but we all know why people are anti-Israel. But it’s not anti-Semitic. He has also compared Israel to the Nazis — a common and lazy insult used by many on the left, but again not prejudice but a very leftist and childish, intellectually lazy, what-aboutist attempt to make the Israelis see that the oppressed is now the oppressor.

What he does represent, however, is a possible future prime minister of Great Britain who has a serious stance against Israel, including BDS, and this is what British Jews are threatened by. They are the ones not separating Israel and its actions from Judaism.

This, to me, is the heart of it. And I appreciate that I am not in sync with my family and some friends on this, but if we truly believe Israel needs to change, then we need to take a stronger stance. If we want special dispensation for Israel because it is the only Jewish state in the world, then we need to think about how far we are prepared to support a state in an unwinnable war against a more and more desperate people. What further horrors and atrocities are we prepared to put up with? What will happen next when peace is so far away?

I observe that my family will defend Israel like a parent defending a child, which of course I understand and which, at this late stage of their lives, I am not going to fall out with them about. But this means that they will not accept a future prime minister (and they are Labour voters, too) who is this aggressively anti-Israel, irrespective of where he is coming from.

But anti-Semitic and an existential threat to my reading Philip Roth and watching reruns of “Seinfeld”? No. Corbyn is a local MP and used to come to my son’s school for Holocaust Day. I never felt any kind of anti-Semitism from him.

Personally speaking, I would much rather have a more centrist leader who appeals to a wider section of the country and who can take on the Conservative government and deal with the catastrophe that is Brexit. I could also do without the crazies in ascendance in the Labour party, and I observe many Jews are resigning because of them and Corbyn’s failure to deal with them.

But Corbyn himself, for all his failings as a leader, is not an anti-Semite, and represents no existential threat to me or my family.

Simon Rosenberg is a freelance web designer with a range of opinions on Judaism that none of his family agree with.