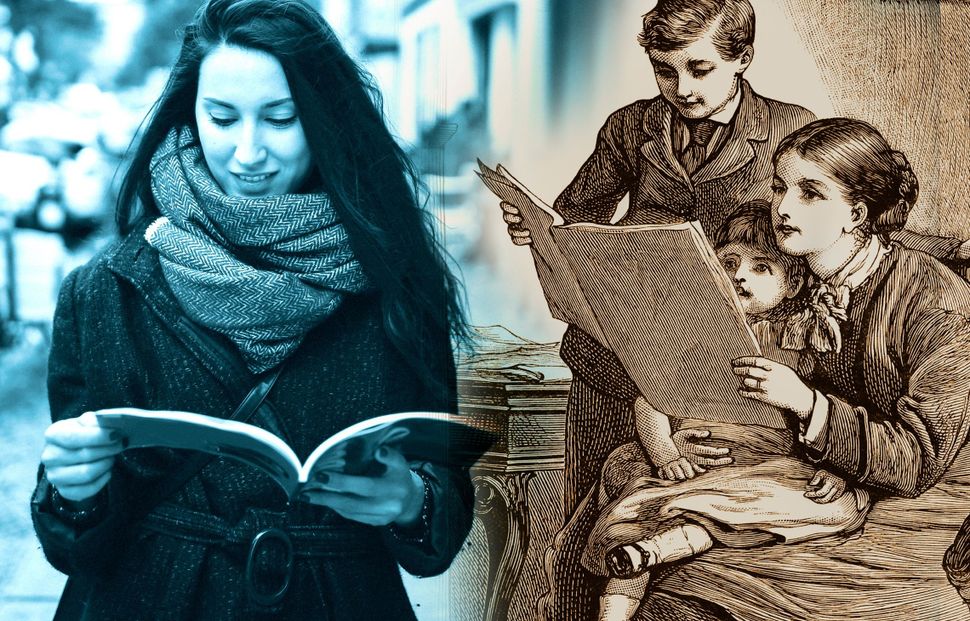 Rosa Sonnenschein, an Austrian-born, quick-witted rabbi’s wife living in St. Louis in the late 1800s, wore her curly black hair piled atop her head in a chignon, and only the most fashionable gowns of the era.

This, however, is an aside: Sonnenschein was a successful writer and journalist; a seminal voice speaking up for women’s membership and expanded roles within the synagogue. In 1895, 25 years before the 19th Amendment granted American women the right to vote, she founded and launched The American Jewess, the first ever English-language magazine for Jewish women in the United States. The American Jewess described itself as “the only magazine in the world devoted to the interests of Jewish women,”publishing the first critiques written by those women themselves about gender imbalances in the world of worship.

Sonnenschein believed that a Jewish woman did not need to experience the religious and national aspects of her identity as being in conflict with each other; that it was entirely possible for a woman to be American and Jewish at the same time. The American Jewess included profiles of notable Jewish women educators and thinkers, opinion pieces on issues of the day such as the advancement of technology and its effects on the home, the right of a woman to study the Talmud, and the education of girls. The magazine also published theater and book reviews, fiction and poetry.

In an 1895 editorial, Sonnenschein wrote: “In our June issue, we called attention to the fact that not one Jewish congregation has the name of a married woman on its membership list. We are indeed pleased and proud to report that some of our leading congregations are now contemplating speedily to right the long endured wrong.”

The issues Jewish women were reckoning with back in the late 1800s did not always pertain specifically to Jewish life or culture, just as it is today.

In 1895, Sonnenschien wrote about single women being deemed ‘old maids’: “The title “Old Maid” is nowadays not the term of approbrium it once was, but occasionally one still hears it applied contemptuously. Those unmarried ladies who are at all sensitive on the subject of their single blessedness, probably forget to what a goody band they belong. Queen Elizabeth the illustrious English sovereign, Jane Austen, the famous novelist, Florence Nightingale, Clara Barton, of the Red Cross society, Susan B.Anthony (and many more) -– all old maids, and the list could be augmented by hundreds just as famous in literature, art, science and philanthropy.”

In the same way that The American Jewess gave voice to the contemporary issues on women’s minds, other magazines quickly followed suit.

In 1914, Hadassah, the Women’s Zionist Organization of America, launched Hadassah magazine, aimed at focusing on politics, current affairs and culture. Recent articles include a feature about fashionable, Instagram savvy Jewish seniors, a look at “sex at any age,” and a profile of a group of Hasidic women in Brooklyn who started their own EMT unit. “Hadassah has always been ahead of our time empowering women,” president of Hadassah Ellen Hershkin recently told the Times of Israel.

Yet for some liberal Jewish feminists, Hadassah was still too much of the old establishment — which is how Lilith Magazine was born, in 1976, with its tagline: independent, Jewish and frankly feminist.

“Lilith was started by a collective of Jewish women who had had a great deal of media experience, at a moment when the women’s movement and a pride and interest in Jewish life were both burgeoning,” Susan Weidman Schneider told me from her New York office. “We were asked: If Judaism is so patriarchal (as was being pointed out then by Jewish feminists and others), then why not walk away from it? The earliest Jewish feminists were well educated Jewishly; we all saw a great deal of growing room and also elasticity within the tradition.”

Lilith today has a large and growing online fan base. Meanwhile, the print publication continues to come out quarterly, featuring stories like “Donor Sperm: The Sequel,” about a teen who meets her half siblings,”; “When you’re that Intergenerational Jewish Lesbian Couple,” about a couple whose Judaism keeps them together, despite a massive age gap between them; and “How a Father’s Addiction formed a Jewish feminist,” about being the activist daughter of Jewish heroin addict.

Lilith was perhaps the first of Jewish women’s magazines to insist that Jewish women can’t be neatly categorized.

Alma, aimed at Jewish millennial women, is named after the Hebrew word meaning a woman of childbearing age who has not had children.

“So many women have reached out to say how nice it is to have a publication that speaks to the particular experience of being a young Jewish woman today,” Molly Tolsky, Alma’s founding editor, told me. “We’re trying to reach Jewish women who aren’t necessarily very observant or religious, and it can be hard to reach people who might not think they’d like a site specifically for Jews. That’s why it’s important to us to not only publish explicitly Jewish content but to get at the broader interests of women in this demographic.”

One writer shares how she lost touch with Judaism when she was depressed, and how Jewish food brought her back. Read now #linkinbio

Alma is owned by 70 Faces Media, which is led by Deborah Kolben, who is also the founding editor of Jewish parenting magazine Kveller. “I think a lot about how to create a community aimed at Jewish women that doesn’t exclude anybody who wants to be a part of it,” said Kolben. “For a lot of our audience, their identities aren’t first and foremost Jewish – it is a part of who they are, but not what defines them. So, it can be a challenge to strike the right tone and balance with how the Jewish piece is woven in an authentic way.”

In the Orthodox community, women’s magazines tend to be a fraught subject. While the two most prolific Orthodox publications aimed at women – Mishpacha’s Family First magazine, as well as Binah magazine – won’t publish pictures of women, the stories they run have much in common with other Jewish and also non-Jewish women’s magazines: Features include self-development, work, relationships, health and nutrition. Crucially, these magazines offer something else, too: Perspectives about living as Orthodox in a secular society. Turning the pages of Family First, there’s a sense of the authentic voice of the Orthodox woman – whether through personal essays or fiction, about marriage, motherhood, infertility, or work-life balance.

“We see our magazine as a dynamic conversation that’s constantly shaped and reshaped depending on the feedback we get,” Bassi Gruen, Managing Editor of Mishpacha’s Family First magazine, told me. “Our readers write cogent, often fiery letters to the inbox, and those letters spark debates that can continue for weeks. They reach out to each other for information and resources, and a number of support groups have been launched through our inbox. The readers have become an enormous, international community, a mishpacha (family) of sorts. Years ago, we received a beautiful letter from a reader in South Africa, who told us that reading Mishpacha and Family First was like having a mother, sister, therapist and best friend, all rolled into one. It was deeply gratifying to see that.” Here, the realities of Orthodox women’s lives are given gravitas in publications aimed specifically at them.

Some Orthodox women, however, feel alienated by the ‘no women’s picture policy’ — and have attempted to create their own publications for niche audiences.

In 2013, Bari Weizman and Shevi Genuth started ‘Hadar,’ a fashion and lifestyle magazine, filled with not only sumptuous fashion shoots featuring fashionable Orthodox women, but some hard hitting features — body image and body disorders in the religious community and feeling uncomfortable at the mikveh, for example. Though the magazine was successful in drawing a substantial readership and establishing a compelling brand, it folded after two years of operation.

“We started Hadar because there was a need. I was a modern Orthodox working mother who didn’t fully relate to the publications on the market; I realized I wasn’t their primary reader,” Weizman told me. “For me, they were missing the religious aspect, which to me is part of every element of my life: It’s in my food and cooking, my fashion, my relationships, my education and parenting, etc. We were very proud of the magazine and the response we received from our readers. But advertisers felt our market was too small. In the end, we were successful in creating a product that people wanted, but we failed in building the proper revenue stream we needed [in order] to continue publishing.”

But others refuse to give up.

The Layers Project Magazine, founded by Shira Lankin Sheps, tries to create an authentic space for Jewish women online.“In the age of “insta-perfect” social media profiles, I felt that women were being negatively affected by seeing only the curated moments of their friends or influencers lives,” Lankin Sheps says. “I thought that creating a space where women could share their emotional life experiences would break through the stigma of the communal taboo topics, and validate the life experiences of others. We also sought to combat the removal of women from Jewish media sources, by showcasing their words and images.”

The scope of magazines available to Jewish women in 2018, would, no doubt, make Rosa Sonneschein smile if she were alive.

Across the spectrum of Judaism, women are working hard to create spaces for Jewish women to feel heard, supported and seen. According to Keren David, associate Features Editor at the Jewish Chronicle, these magazines reflect “a wish to move beyond and redefine the tired old stereotypes of Jewish womanhood.”

“We’re not spoiled princesses or overbearing mothers,” says David. “We’re not silent brides or domestic goddesses. We are speaking for ourselves, and it is an exciting thing to be a part of.”