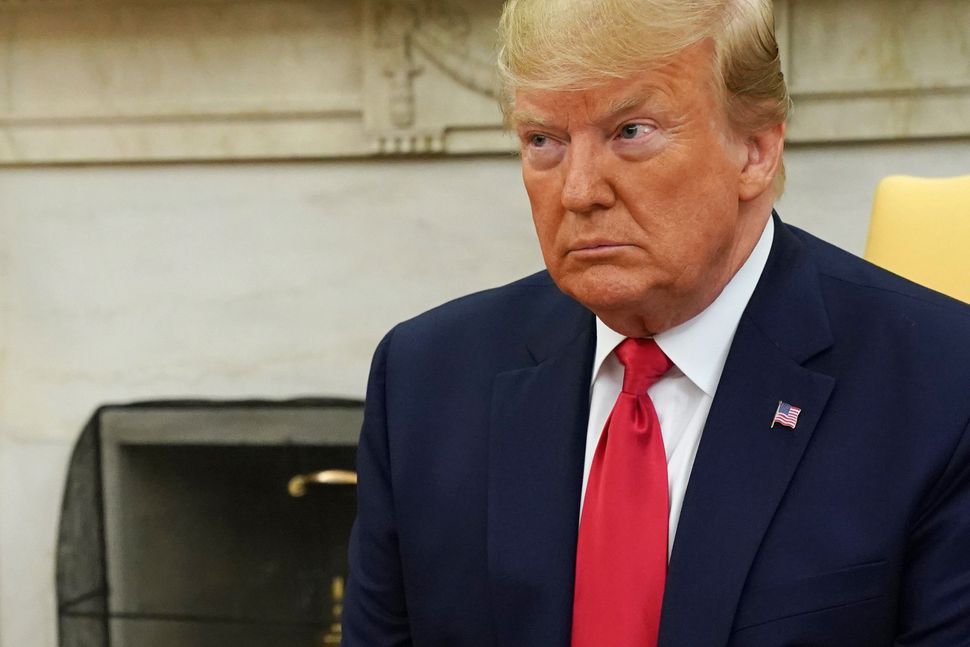 Resorting to fresh new lows, President Trump threw a remix on what is arguably the angry white lynch mob’s greatest racist hit: “go back to Africa.”

He didn’t say that, verbatim. But in a burst of callous tweet aimed at Congress’ only Somalia-born Member – “Why don’t they go back and help fix the totally broken and crime infested places from which they came …” – everyone, including the President, knew exactly what that meant and what it is.

“Going back to Africa” is in the top three of the anti-Black rotation, used for centuries with great bigoted effect to further threaten and dehumanize people of African descent in the United States, while skillfully distorting and skirting the historical record. Black people worldwide have long been the butt of this cruel caption, and it stings worse for the direct descendants of a lost tribe ripped mercilessly away from homeland several hundred years ago and sold elsewhere to another.

Nor is this episode helping the Trump administration win new friends among African countries as it struggles to launch a “Prosper Africa” re-engagement to thwart growing Chinese and Russian influence on the continent. The U.S.-Africa Business Summit in Mozambique just ended a few weeks ago and, with it, any real confidence that Americans could somehow tap into the fastest growing middle-class market in the world.

Instead, Trump didn’t even bother to show up. In fact, the only Trump that’s ever been to Africa is Ivanka, and that ended up looking like the Broadway production of an epic stereotype. Bad enough U.S. investment in Africa is on the decline as Chinese and Russian investment, all happening with the personal involvement of their leaders, is on the rise. Worse now that an American president shows personal disdain for anything or anyone African.

In short: It’s about as racist as you can be.

Which is a chief reason why the president, and others like him, always get away with it. There’s always been dark comedy and irony in that statement. “Going back” strangely makes the case that black people always had some sort of choice in the matter, either shackled or unshackled. It successfully absolves white society of guilt, of ever having created the global sin of mass African slavery and of perpetuating the systematic effort to eviscerate black humanity.

Instead, barbaric WASPy revisionism paints a fictional narrative that Africans from across the continent gleefully dashed across the Atlantic to America and that black people today are descendants of “immigrants” just like “everyone else.”

Much like slave masters of plantations yore, “going back” is simply a modern rhetorical version of whip-tipped White Man’s Burden ideology – black people should be happy they’re in America, for three-square meals a day and shelter, even if institutions relentlessly hunt them down. The ugly psycho-social dimensions go far beyond the tweet, the racism crystallized, beating a nation’s black population like a discarded orphan and a nasty acknowledgement that, in many ways, they really have no place to go.

As sickening and irrational as it would seem, “going back” is very deliberate and diabolical. Even if it disgusts you, don’t casually brush this off as another dim-witted Trump tweet. It’s not. It serves a purpose. Omar’s own personal story, fleeing war-torn Somalia as the child of legitimate refugees, is dramatically different from what the Americanized “Going Back” has traditionally referred to.

Of course, MAGA philosophy devotes very little brain power to making those distinctions: All black people “look alike” and are therefore the same story. The president is quick to lump it into a total black story dipped in both ignorance and racist strategy. The ignorance of it fortifies a wrong-headed perception of Africa as a desolate and powerless place, and the “crime-infested” allegory in that same breath cements the image of Blackness as inherently criminal and lawless. His already anti-immigrant base is deeply tied to both fanatical xenophobia and white fear.

Perhaps there’s a political bonus in it for him if he manages to throw Democrats into more fervor and disarray. He’ll continue elbowing his way into the Democratic primary and he’ll eagerly look for cracking fault-lines in what are now out-in-the-open disputes between House Speaker Nancy Pelosi and a very vocal quartet of diverse Congresswomen, including Omar. Maybe Pelosi gets smart and twists the moment to her party’s advantage, using it as a moment to put fissures on pause and unify against a much greater, much more dangerous enemy.

Are Democrats all that smart, though?

Predictably, since this latest episode buys him a little time away from other embarrassing news cycles, Trump will either outright deny or double down. Either way, his assorted legions of disturbingly red-faced fans will reward him with added praise and adulation for pushing back against phantom forces of political correctness.

This gets deeper than the politics of the day. We can’t act like Trump is the only guilty or racist party involved here. America is largely, and comfortably, ignorant of Africa, dismissive of the fact that it is not a country but a continent, and unaware of its vast complexity, economic growth potential and a rich heritage that is far more than just “safaris.” Many Americans, including some Republicans, express shock at the tweet, but are we looking inward?

A recent USC Annenberg Norman Lear Center Media Impact Project report offers troubling data on just how much Africa is mistreated in discourse and imagery: Television viewers are “twice as likely” to see “negative depictions” of the continent, and 35% of Africa mentions in American shows are about crime. So, what’s so different about Trump?

Black people in America are in a very fragile social, political and economic state. A majority are descended from once African slaves first brought to Virginia shores 400 years ago and most have no direct connection to a specific place other than what’s perceived, imagined or assessed from another person’s telling of it.

There are no continents, no other places on the planet that receive the kind of ridicule, animus and racist white-wash treatment Africa does — not even geopolitical rivals who point weapons at us like Russia or China.

The phrase “Going Back” is a constant reminder of this, and a sinister message that African Americans are not only besieged at home, but that there are no ancestral nations, institutions or diplomats from afar to defend them — a luxury many other groups have.

The moment, hence, presents a new imperative and hopeful approach for black people in the United States: It’s time to find both power and protection as a global Black Diaspora connected as one. Maybe then Africa won’t just be a dark place to go back to. Maybe it, and the wealth of nations within it, will get the respect they’ve always deserved.