Want To ‘Send Omar Back’? That’s What The Nazis Did 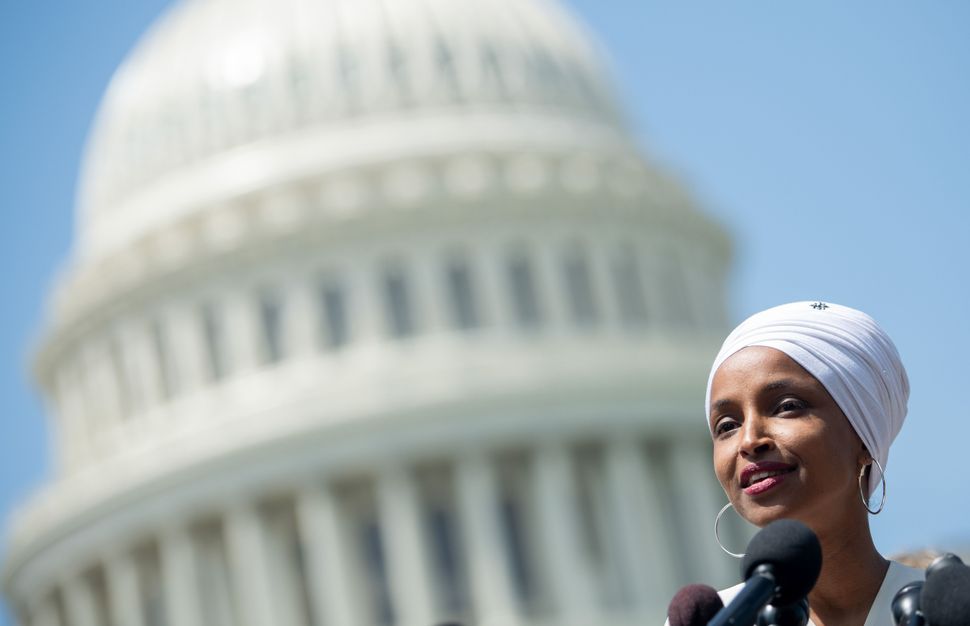 Since Sunday morning, President Trump has been on an endless tirade suggesting that four Congresswomen – Ilhan Omar, Alexandria Ocasio-Cortez, Ayanna Pressley, and Rashida Tlaib, all women of color – are un-American. Conflating Pressley, Tlaib, and Ocasio-Cortez, all U.S. born citizens, with Omar, a Somali refugee, Trump suggested that all four “go back” to the countries they “originally” came from.

In its assumption that black and brown women are immigrants, and that immigrants are less American than citizens, the attack was undeniably connected to the four Congresswomen’s races. As such, it was rooted in those parts of American history that should bring us the most shame.

But it was also an assault on the very idea of citizenship itself, in its suggestion that four Americans could possibly belong anywhere else. Though Trump did not suggest he wanted to deport them, the tweets had the whiff of wishful thinking – if only we could be free of these women. Because they are U.S. citizens alone, this wish was a wish for four people to be rendered stateless.

For proof that this is what Trump’s supporters heard in his words, we only had to wait for him to repeat the attack at a rally. “They don’t love our country. They are so angry,” he said. “If they don’t like it let them leave.”

His audience answered his call with a response: “Send her back.”

“Send her back” chant breaks out at the Trump rally when he talks about Omar pic.twitter.com/JFZHc7eaOc

And while they chanted, the President of the United States smirked.

There is nothing more dangerous than the idea that citizenship is mutable, that it can be undone, that it is not a permanent thing. A stateless person has no government who is answerable to them, which means their blood is cheap, if not free. Who will speak up for them when they are inevitably abused? Who will come to their aid?

It’s something we Jews know all too well. Before the Nazis began their extermination of six million Jews, they revoked their citizenship. It was a crucial first step, argued the political theorist Hannah Arendt, herself an escapee of a concentration camp. As merely humans, rather than Germans or Poles, the Jews were not only disposable to the Nazis but to the rest of the world.

“The world found nothing sacred in the abstract nakedness of being human,” Arendt wrote in Origins of Totalitarianism. “It turned out that the moment human beings lacked their own government and had to fall back upon their minimum rights, no authority was left to protect them and no institution was willing to guarantee them.”

If you doubt that this could happen today, look no further than India, where four million people, most of them Muslims, have had their citizenship revoked and are being ethnically cleansed. Look to the Rohingya, a stateless minority, whose lack of citizenship in Myanmar was the excuse for their ethnic cleansing (“And where is that exactly?” President Trump asked a Rohingya man today who was requesting help for his people).

Trump’s apologists excuse his comments as mere criticism of Omar and the rest of the Squad as they are known. But Trump has allowed his criticism to bleed into calls — both his own and those of his supporters — for the revocation of citizenship. It’s good to see even right wing pundits calling this out.

House GOP leaders raised the “send her back” chant at breakfast with VP Pence this morning & cautioned, “we cannot be defined by this,” per Rep. Mark Walker, who called it “something that we want to address early” before it becomes a campaign staple like “lock her up”

Criticism of Omar and others must remain fair game; she is, after all, an elected official, with a vote on whether the U.S. goes to war. Cries from the left that those of us who have criticized the outspoken Congresswomen have caused Trump’s racist comments are only the inverse of Trump’s belief that there is no difference between criticism and calls for deportation. (The left would also do well to remember the sacredness of citizenship in their comparison of detention centers of non-citizens to concentration camps, which, after all, were used to house denaturalized former citizens prior to their extermination.)

But Trump’s suggestion that critics of America are less American, and even worthy of being denaturalized, is an extremely dangerous one. And it’s un-American, too.

Want To ‘Send Omar Back’? That’s What The Nazis Did