The Absolute Hypocrisy Of Republicans Using Jews To Attack The Squad 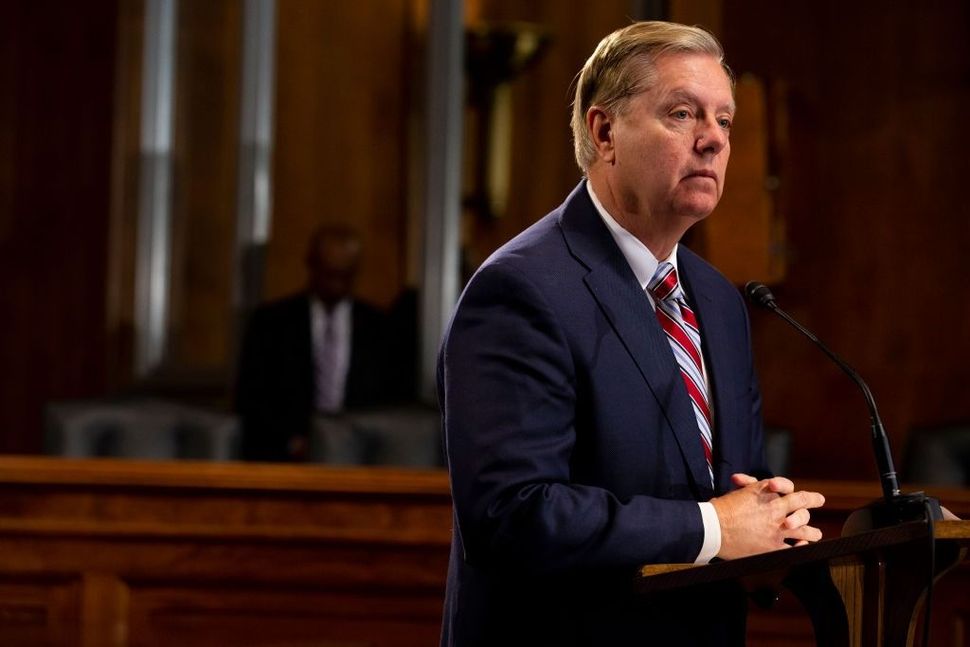 Senator Lindsey Graham went on television and proclaimed that Congressional House Representatives Alexandria Ocasio-Cortez, Rashida Tlaib, Ayanna Pressley, and Ilhan Omar are a “bunch of communists.” He called them Anti-Semites, and said they “hate Israel.”

Graham is now the latest addition to a lineup of would-be “Jewish Defenders” who have lobbed attacks at these women for allegedly anti-Jewish statements or positions. In March, House Minority Leader Kevin McCarthy claimed that Omar had “questioned the ability of an American to have allegiance to America if they were Jewish.”

In June, U.S. Representative Liz Cheney took issue with Ocasio-Cortez’s use of the term “concentration camp” when describing the immigration detention centers, arguing that because “6 million Jews were exterminated in the Holocaust,” Ocasio-Cortez’s comparisons “demean their memory.”

Please @AOC do us all a favor and spend just a few minutes learning some actual history. 6 million Jews were exterminated in the Holocaust. You demean their memory and disgrace yourself with comments like this. https://t.co/NX5KPPb2Hl

I won’t bother delving into the factual inaccuracies of these accusations. Obviously, there’s plenty to be said about Graham’s apparent misunderstanding of communism, McCarthy’s inaccurate restatement of Omar’s opinions, and Cheney’s imprecise understanding of what concentration camps are.

However, since pointing to lies and misstatements doesn’t seem to resonate much in this era of “alternative facts,” perhaps it’s more worthwhile to point out a massive oversight in these politicians’ posturing.

Namely, what these self-appointed “champions” of the Jewish people have failed to recognize is the absolute insanity of attempting to ingratiate oneself to a minority with a long history of persecution while simultaneously defending and excusing racism against others.

The events of the last few days have been pretty unbelievable.

On Sunday, President Trump tweeted that Representatives Ocasio-Cortez, Tlaib, Pressley, and Omar, who are all Americans, need to “go back and help fix the totally broken and crime infested places from which they came.” The backlash against him was swift (thank goodness), as most Americans couldn’t help but see the offensive racial undertones of such a downright stupid statement.

The following day, Senator Graham went on Fox & Friends. When asked whether he thought Trump’s statements went too far, Graham essentially twisted himself into a hypocrisy pretzel. Remarkably, in a single breath, he asserted that the President should “aim higher” by critiquing these leaders’ policy goals instead of attacking them personally, and then he called them anti-Semites.

.@LindseyGrahamSC on Fox & Friends: “We all know that AOC and this crowd are a bunch of communists … they’re anti-Semitic. They’re anti-America.” pic.twitter.com/lsFqZi1Eu8

On Tuesday, House Majority Leader Nancy Pelosi introduced a resolution to condemn Trump’s tweets as racist. Representative McCarthy denounced both Pelosi’s efforts and her choice of words, arguing that President Trump’s tweets were not racist, and Democrats’ outrage over the comments was “all politics.” (Naturally, the Commander-in-Chief, who clearly has nothing better to do, took the time to personally thank McCarthy on Twitter for his statement.)

Democrats have turned the House of Representatives into a weapon of political theater. They aren’t interested in legislation. They’re only here for retribution. https://t.co/ul3IWPrUp8

Kevin McCarthy @GOPLeader, “The President’s Tweets were not Racist. The controversy over the tweets is ALL POLITICS. I will vote against this resolution.” Thank you Kevin!

Cheney also weighed in, taking issue with the “policies” of the Congresswomen Trump attacked, claiming that Republican “opposition to our socialist colleagues has absolutely nothing to do with their gender, religion, or race.” (Though she apparently missed the irony of making that claim in defense of a tweet that urged non-White American women to go back to their home countries rather than articulating a clear critique of those individuals’ policy agendas.) Needless to say, she later voted against the resolution.

“Our opposition to our socialist colleagues has absolutely nothing to do w/their gender, religion, or race. It has to do w/their policies

They’re wrong when they fail to recognize this is the greatest nation that has ever existed” pic.twitter.com/GW6kUswZ46

Presumably, Graham’s statements on Fox arose from what he perceived as an opportunity to attack Democrats in a way that could help him drum up support from Jewish voters. And seemingly, the same motivation underlies McCarthy’s criticism of Omar in March and Cheney’s of Ocasio-Cortez last month.

Given that Donald Trump hasn’t yet realized that he is fighting a losing battle in his attempt to woo American Jews with pro-Israel stances and far-flung accusations of anti-Semitism, perhaps these other politicians are laboring under the same delusion. Perhaps they think that tagging these women as anti-Semites is a way to earn themselves more Jewish votes.

But Graham, McCarthy, and Cheney have all failed to see a fatal flaw in their bids for Jewish support. That is, the Jewish community has a particularly potent cultural memory.

The Jewish people know what it means to be scapegoated and maligned by political leaders. We remember what happened after our grandparents were treated as outsiders by their home countries. We are acutely aware of how dangerous it is to vilify a minority, round them up into, dare I say it, concentration camps, and then claim that your actions are merely eradicating a threat to the nation. A thousand Jewish activists managed to shut down ICE’s offices in Washington, D.C. yesterday for precisely this reason: we meant it when we said “Never Again.”

And so, to most of us, comments like those described above are not just unconvincing; they are morally corrupt.

We aren’t blind. We can see that with one hand, these politicians style themselves as defenders of our interests, and with the other, they shield xenophobia and brush aside racism. We see it, and we reject it. We reject their bids to act as unsolicited champions of American Jews, and more importantly, we reject their shameful complicity.

Lindsey Graham, Kevin McCarthy, and Liz Cheney may not be able to find the backbone, the conscience, or the sense of morality to denounce Trump’s repulsive comments and his administration’s frightening and hateful policies. That’s unfortunate, and I sincerely hope that they answer for their cowardice in 2020.

But whether they kiss Trump’s boots as sympathizers or they see the error of their ways before we can vote them out of office doesn’t really matter. The truth is, Republicans’ beef with these Progressive Democrats has nothing to do with anti-Semitism. It’s not Ocasio-Cortez who is cheapening the suffering of our ancestors; it’s the politicians who cry “anti-Semite” to try to prove their worthiness of our political support while expecting us to forget what it means to be attacked, by our own nation’s leaders, simply because we are different.

So please, all of you, leave the Jewish people out of this.

The Absolute Hypocrisy Of Republicans Using Jews To Attack The Squad