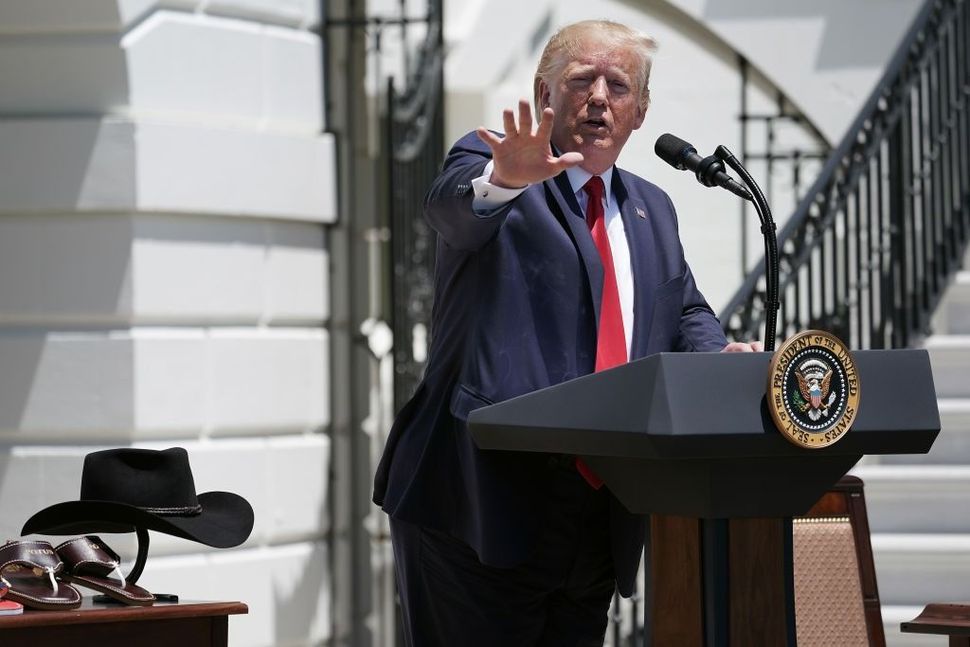 WASHINGTON, DC - JULY 15: U.S. President Donald Trump takes questions from reporters during his ‘Made In America’ product showcase at the White House July 15, 2019 in Washington, DC. Trump talked with American business owners during the 3rd annual showcase, one day after tweeting that four Democratic congresswomen of color should “go back” to their own countries. (Photo by Chip Somodevilla/Getty Images) Image by Getty Images

You can call President Trump’s tweets on Sunday and Monday – in which he said that a group of Congresswomen should “go back” to the countries from which they came and then attempted to justify his position because they “hate Israel” – anything you like, and certainly racist, xenophobic, cretinous, and puerile are good places to start. But add to that list anti-Israel, because there is no question that Trump’s tweets are the best example yet of why he presents such a singular danger to Israel and its supporters.

Trump’s attack via Twitter on a group of progressive Congresswomen, whom he did not name but appeared to be a reference to Alexandria Ocasio-Cortez, Ilhan Omar, Rashida Tlaib, and Ayanna Pressley, is indefensible in its imputation of non-Americanness to four American citizens. That these four are women of color brings in a racial element that compounds the ugliness of his charge.

American Jews should look at Trump’s tweet and shudder, not only out of embarrassment over the truism that we get the leaders that we deserve, but out of a sense of dread. When politicians turn to nationalism to demean an entire class of people as foreign others who do not belong here and who present an unidentifiable shadowy threat, it should remind us that the primary target of such rhetoric has historically been Jews.

Anyone who believes that a president spewing anti-immigrant sentiment and tarring Americans of different backgrounds and ethnicities as not sufficiently American will not inevitably lead to anti-Jewish pogroms has a memory insufficiently robust to extend back to October of last year. The fact that one of his targets has herself implied dual loyalty on the part of American Jews does not make Trump’s shameful behavior something that should be cheered on.

But even if you think that Omar, Tlaib, and company are only getting their just desserts for their past lack of sensitivity in how they speak about Israel and its Jewish supporters in the U.S., there is another angle to Trump’s diatribe that should give pause.

When Trump specifically links his attack on this group of members of Congress to Israel, in what is a flimsily far-fetched post-hoc defense even by his laughably low standards, he causes enormous damage to Israel in this country. Any fair-minded person, irrespective of their political leanings, can easily see the callous racism in Trump telling American citizens who are minorities – three of whom were born in this country – that they should go back to where they came from.

Hiding behind the shield of standing up for Israel as a justification for this behavior does not wash the taint of bigotry off Trump, but instead paints Israel with Trump’s racist brush.

For those who are already predisposed to seeing Israel as racist for its treatment of Palestinians, it reinforces the mistaken notion that Israel is an ethno-supremacist colonial outpost in a world where that is unacceptable. For those who have difficulty separating Israel from Trump due to the unusually tight bond between the president and Prime Minister Netanyahu, it reinforces the mistaken notion that Israel approves of every odious domestic policy that this administration propagates. For anyone who detests Trump and his worldview, it provides another target to protest and boycott.

This is Trump’s way of directly using Israel to inoculate himself from criticism, knowing that these particular Congressional targets and his cynical invocation of Israel will make some American Jews reluctant to call him out and cause others to mute their criticism. And thus Trump continues down the path of pointing to Israel when he gets into trouble – and even more starkly than usual in this case, as he did not invoke Israel until after his initial set of tweets had set off a firestorm – and relying on his American Jewish supporters to remain silent.

Nothing about this is remotely pro-Israel. It is precisely the opposite. In a country where Israel is already facing an uphill battle with younger and more progressive Americans, where minorities are becoming a larger percentage of the population, and where Trump is the most unpopular president of modern times, bringing Israel out of the blue into his racist demagoguery is one of the most anti-Israel acts that he could possibly commit.

Any and all responsible pro-Israel American Jewish leaders with a modicum of backbone will stand up and denounce Trump’s racism for what it is, and make it clear that they see no connection between his latter-day McCarthyism and any coherent defense of Israel. Those who do not will bear their own share of the responsibility when they wake up a few years from now and Israel’s standing among Americans is finally confined to pockets of Republicans, evangelicals, and politically conservative Jews. And when that happens, the exhortations to rename a part of the Bible after Trump will only be appropriate if they are talking about renaming the Book of Lamentations and recounting the Israelites’ isolation.