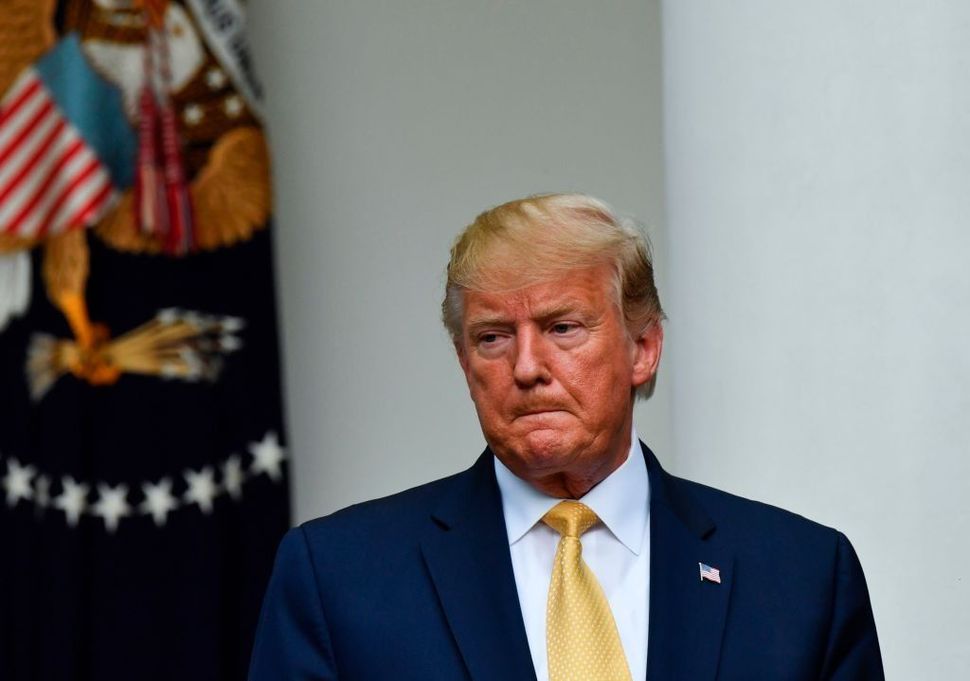 US President Donald Trump looks on as the US attorney general delivers remarks on citizenship and the census in the Rose Garden at the White House in Washington, DC, on July 11, 2019. (Photo by Nicholas Kamm / AFP) (Photo credit should read NICHOLAS KAMM/AFP/Getty Images) Image by Getty Images

Donald Trump’s vulgar racism is not incidental to his political character. It’s not a latent undercurrent revealed in some unguarded moment, but rather the force through which his political career was launched and continues to perpetuate his hold over the Republican Party. This has been obvious for quite some time, indeed since he announced his presidential campaign on the heels of ugly stereotypes about Mexicans.

So his tweets early Sunday morning telling unnamed but easy-to-guess female members of Congress to “go back” to the countries from which they “originally came” should have not have been jarring as they appeared. It was Trump’s typical shtick of portraying immigrants as dangerous foreign imports who, if they are not undermining the United States, are at the very least disrespecting it in some way or another.

Yet President Trump’s new boorish fusillade still struck a chord, as if a new line had been crossed, with thousands sharing on social media personal stories of confronting similar bigotry throughout their lives. Trump’s comments were “beyond the pale” in a way that made them distinct from his previous expressions of racism. They even seemed to elicit more outrage than the mass ICE raids reported this weekend.

It was indeed an escalation. Trump campaigned on stopping future Muslims from entering the country, and now as president he is casting aspersions on those already here. But while perhaps it’s “old news” by now, no one should forget the disgusting lie he repeated about “thousands” of Muslims in New Jersey publicly celebrating the September 11th terrorist attacks. Trump is usually marginally less lurid in his racism, but yesterday was obviously not the first time he’s let the mask fully slip.

Charges of disloyalty based on national origin followed by calls to “go back where you came from” create obvious concerns for Jews, to whom Trump has demonstrated a gross lack of sensitivity in the past. Earlier this year, Trump referred to Benjamin Netanyahu as “your prime minister” in an appearance before the unctuous Republican Jewish Coalition, which as of Sunday evening had still not said a word about Trump’s tweet. Before the same organization as a candidate in 2015, he indulged several stereotypes about Jews in the financial industry.

The RJC was filled with a room of supporters, whom in Trump’s white Christian vision of the country are evidently a tolerated minority. It’s frightening to imagine what he thinks of the over 70% of Jews who spurned his poisonous drivel in the last presidential election and will surely do so again in 2020. Even if he never quite fully expresses Jew-hatred, he entertains ideas from which Anti Semitism naturally flows.

Ultimately, it’s not critics in the Jewish community like me who should be most afraid of Trump’s increasingly lurid and hateful rhetoric. Rather, the establishment and institutional leaders who have played footsie with the administration should be most concerned.

A political culture in which it’s acceptable to tell citizens to ‘go back where they came from’ is a potentially toxic one for Jews. Jonathan Greenblatt, the CEO of the Anti-Defamation League, was right to call Trump’s remarks “flat-out racist.” Yet he chose not to name the president, a courtesy he did not give to Rashida Tlaib and Alexandria Ocasio-Cortez when they made non-racist remarks about Israel’s founding and the administration’s inhumane detention camps, respectively.

Whether or not you like their politics, telling people born in the US to “go back where they came from” is flat-out racist & telling naturalized citizens the same is xenophobic. As Jews, we’re familiar with this kind of prejudice. It has no purpose but to divide us & spread hate.

I suspect this omission was intentional and self-interested, as was the AJC’s refusal to call Trump’s tweets racist (they were mere immature “potshots”). Perhaps more than anyone they know there is no consensus in the American Jewish community about Trump. Around a quarter of American Jews supported him in 2016, and the president remains broadly popular in the Orthodox community, the fastest growing denomination. This lack of consensus about Trump has, in turn, spawned divisions in the community about the nature of anti-Semitism itself.

It may sound as if I’m piling on, but in truth I do not begrudge legacy organizations for their balancing act with our repellent president. Their relationship with power is naturally different from that of a writer with no personal, emotional or professional investment in maintaining the frontage of a “unified Jewish position.” And acting pusillanimously in the face of the single greatest threat to American democracy in the 21st century certainly does not preclude them from doing good work in other areas.

Still, by not speaking out forcefully, and even praising the president on Israel-related policy decisions, they have taken an ambiguous position on Trump that will prove inexplicable to the minority groups under vicious attack by the man and his supporters today.

On some level, or perhaps unwittingly, Trump exploited this fissure last night by denouncing the congresswomen for “hat[ing] Israel with a true and unbridled passion.”

Instead of ignoring or patronizing the young Jews who have taken a confrontational approach toward the administration, they should quietly thank them for their moral clarity. It is their actions to which future leaders of the establishment will reference when discussing the Trump era, a shameful period of American history.