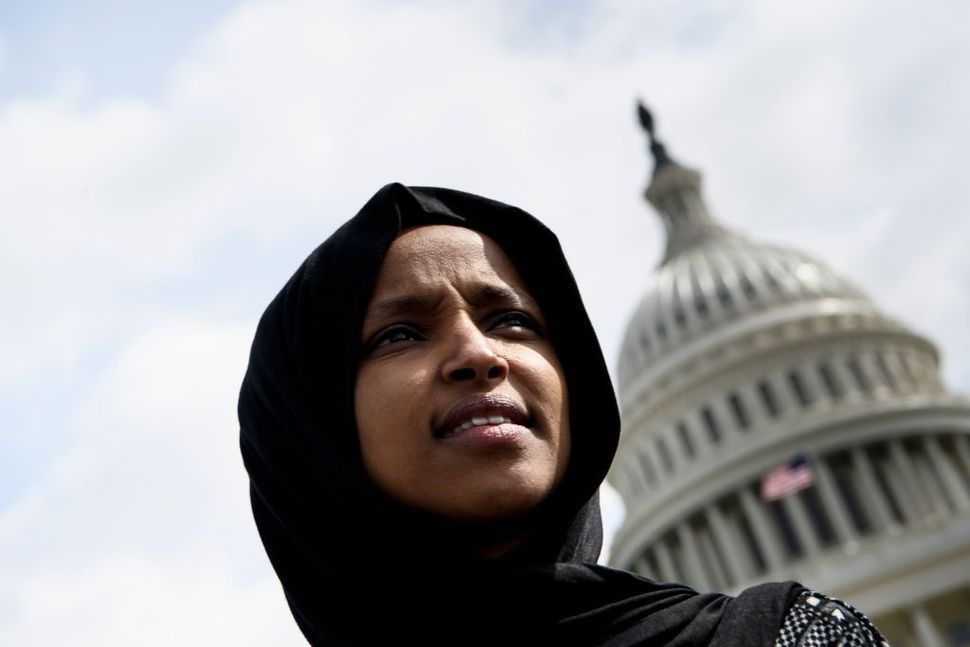 Progressive Jewish groups are expressing their support for Rep. Ilhan Omar after President Trump tweeted a video on Friday that criticized a recent statement she made about the September 11, 2001 terrorist attacks.

Trump’s video, which has been seen more than 10 million times, spliced footage of 9/11 with comments the Minnesota Democrat made at a gala for a chapter of the Council on American-Islamic Relations, where she said, “CAIR was founded after 9/11, because they recognized that some people did something and that all of us were starting to lose access to our civil liberties.” Conservatives, including Republican members of Congress, accused Omar of minimizing the incident as merely being “some people did something,” while liberals said that the video took her words out of context and would subject her to even more death threats than she has already received.

Since then, more than 150 progressive groups have signed a letter to show solidarity with Omar, Politico reported. “The attacks aimed at Rep. Omar are beyond the pale,” the letter said. “Far from legitimate disagreements and critiques, there are intentional efforts to spread misinformation and incite fear and hate in the hearts of people in this country.”

Among the signatories were the leaders of Jewish Voice for Peace, IfNotNow, T’ruah: The Rabbinic Call for Human Rights and local Jewish progressive advocacy groups in New York, Washington and Detroit – as well as the Minnesota-based organization Jewish Community Action, which has worked with her going back to her time in the state legislature, and conducted a training session on anti-Semitism for Omar and her campaign staff in 2018.

Omar has apologized for some of the comments she has made in recent months that led her to be accused of anti-Semitism, but stood by others as legitimate criticism of Israeli actions or of lobbying efforts to further pro-Israel policies.

Bend the Arc: Jewish Action also published a supportive tweet that was retweeted by Omar. “The attacks on you from the President are violent and unconscionable,” the message said. “Our Jewish community has your back. We will not be silent. We will keep fighting for a world where your faith & your leadership are respected.”

House Speaker Nancy Pelosi asked the Capitol Police on Sunday to assess whether Omar needed more security protection, Politico reported. Trump continued his attacks on Omar on Monday. “Before Nancy, who has lost all control of Congress and is getting nothing done, decides to defend her leader, Rep. Omar, she should look at the anti-Semitic, anti-Israel and ungrateful U.S. HATE statements Omar has made,” he tweeted. “She is out of control, except for her control of Nancy!”