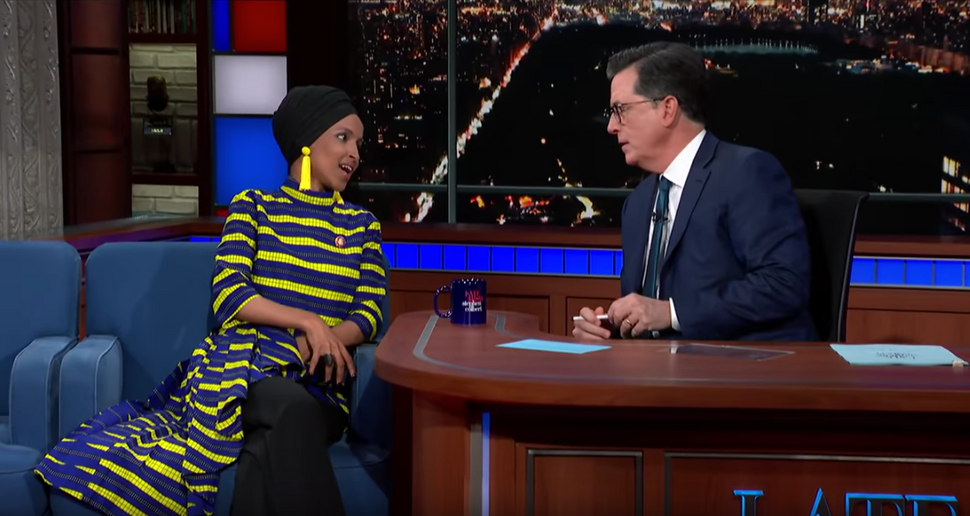 Rep. Ilhan Omar appeared on “The Late Show with Stephen Colbert” on Wednesday, and right away was pressed to talk about the accusations of anti-Semitism that have bedeviled her in the last year.

After Colbert gave a rundown of one of her controversies – specifically, her tweet claiming that congressional support for Israel was “All about the Benjamins,” for which she later apologized – Omar explained that her experience “really has been one of growth for me.”

“Oftentimes when you’re speaking, you might not understand the historical context of some of the words you might use and the kind of pain it might incite for people,” she continued. “So in this process, I’m learning that everything is not as simple as we might think we might want to state it. And as I’ve said to my constituents, to my colleagues, when you tell me that you are pained by something that I say, I will always listen and I will acknowledge your pain – the same that I expect. So when you have people on Fox News that question whether I am actually American or put America first, I expect my colleagues to say that’s not okay and call that out.”

Omar recently called White House advisor Stephen Miller, who is Jewish, a white nationalist – for this, Republicans again called her anti-Semitic. But Colbert defended her from this charge. “Haven’t I said that?” the host asked rhetorically.

“You get attacked, A, because of some of the history you already have in terms of being a cudgel in the area of anti-Semitism, the accusations, regardless of your apology, but also, because you’re a Muslim, because you’re a woman, because you’re a person of color, you’re given less latitude than someone like me,” he said.

Colbert’s final question was about the pressure Omar and other freshmen representatives like Rashida Tlaib and Alexandria Ocasio-Cortez have had to stay out of the spotlight and not push controversial legislation. “We are not there to be quiet, we are not there to be invisible,” Omar said, citing the history of women and people of color asked to wait for progress to come to them.