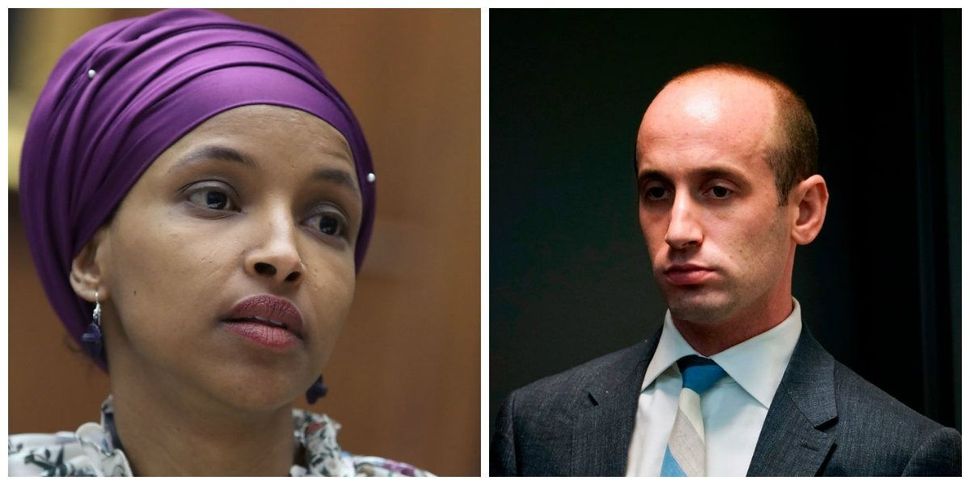 Rep. Ilhan Omar was again accused of anti-Semitism on Monday, this time for saying that White House senior advisor Stephen Miller, who is Jewish, is a white nationalist.

“Stephen Miller is a white nationalist,” the Democrat from Minnesota tweeted, sharing an article about his alleged role in picking who will run U.S. Immigration and Customs Enforcement. “The fact that he still has influence on policy and political appointments is an outrage.”

The fact that Jews like Miller are targeted by violent white nationalists led Rep. Lee Zeldin, a Republican from New York who is perhaps Omar’s biggest critic in the House, to speak out. “During my time in Congress before @IlhanOmar got here, I didn’t once witness another Member target Jewish people like this with the name calling & other personal attacks,” he tweeted. “In 2019 though, for @IlhanOmar, this is just called Monday.” She was also slammed by Donald Trump Jr., who called her a member of the “Farrakhan Fan Club.”

But Rep. Mark Pocan of Wisconsin, the co-chair of the Congressional Progressive Caucus, defended his Democratic colleague. “Last year I called Stephen Miller a white nationalist, but @RepLeeZeldin & @DonaldJTrumpJr never accused me of anti-Semitism,” he tweeted on Tuesday. “Rather than attacking @IlhanMN, why won’t they stand up to white nationalism & President Trump’s support for ‘very fine people’?”

Miller, who is responsible for implementing President Trump’s hardline immigration policies, has repeatedly been praised by white nationalist leaders. Miller’s uncle, David Glosser, told HuffPost last year that he thinks his nephew views other ethnicities as “unworthy or inherently unsuited to life” in America.

Omar has previously been criticized for comments that were seen by many as alleging that pro-Israel Jews have dual loyalties.