Ilhan Omar Can Fix This. Here’s How. 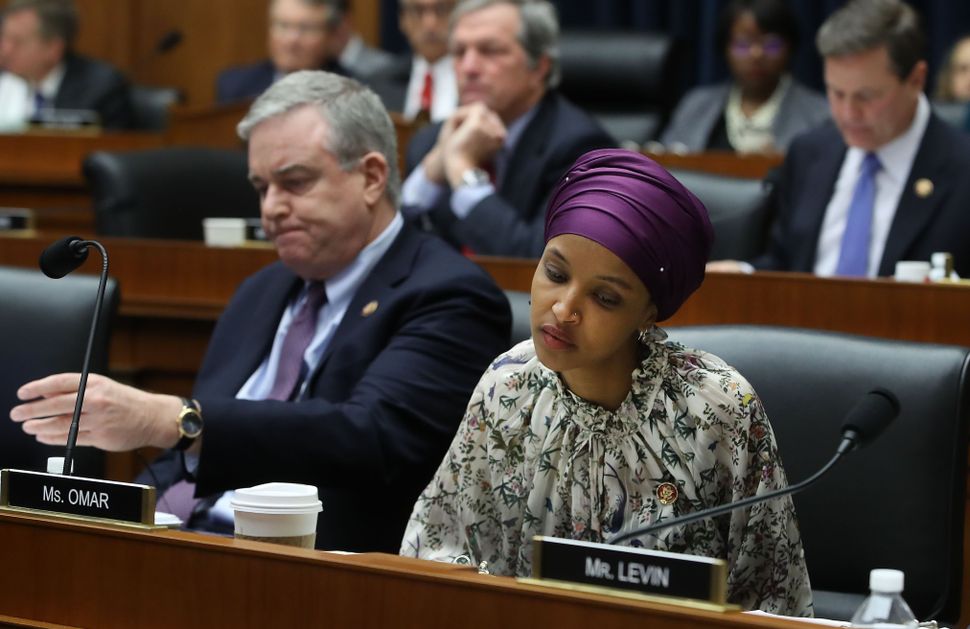 The dust is settling from a recent brouhaha surrounding problematic remarks by freshman Congresswoman Ilhan Omar of Minnesota about money from pro-Israel lobbyists and foreign “allegiances.” The comments earned Omar censure from her fellow House Democrats for evoking anti-Semitic clichés.

Omar also had many critics on the right, who took her words as an opportunity to engage not so much in “whataboutism” as pot-calling-the-kettle-blackism; after all, their standard bearer in the White House is the one happily inciting violence against Jews from white nationalists, whether it’s in Charlottesville or Pittsburgh.

And others took the opportunity for knee-jerk rhetorical beatdowns that, ultimately, don’t help anyone involved; instead, they should use these episodes as a public policy tutorial moment, as well as an opportunity to supply a confused America with a primer on anti-Semitism.

Still, some blame falls on Omar as a policy novice. She has, simply put, punched a few classes above her present policymaking weight class. She may have campaigned well, yet – as is the case with most candidates winning Congress for the first time – governance and legislating at this level are considerably bigger and much more unpredictable beasts.

This is no longer the Minnesota state legislature, Omar’s last elected venture. This is the big leagues, and Omar has as of yet failed to level-up.

Of course, she’s not alone. The somewhat direct leap from localized advocate to national stage legislator is frequently cumbersome and fraught with multiple mistakes; the newly elected’s ability to chart a path is dependent on that person’s willingness to quietly seek guidance. It’s unclear if that’s happened with Omar, as problems and public gaffes continue to mount.

Should her very public political hemorrhaging continue, Omar may soon find herself in the unenviable position of being a one-term Congresswoman.

But there’s no reason it must be that way. She has time to turn the proverbial ship around and navigate herself to calmer waters.

A more seasoned mentor might advise her to slow the roll a little while she’s ahead and reassess the landscape. That in no way means she should quit speaking on Israel with respect to its policies on Palestinians, African migrants and other matters.

But it does mean she should approach it in a way that makes her less vinegar and more honey, less lightning rod for unwanted attention and more thought leading beacon for something much more substantive than soundbite or tweet.

If Omar wants to make Israel a centerpiece of her focus in Congress – good. But she has to do this smartly. If this issue is that important to her, penning a few textured and very wonkish editorials in high profile publications could help push the needle forward towards a conversation that’s much more fruitful for all involved – including for Omar herself.

Omar’s presence on the House Foreign Affairs Committee should have presented an opportunity for her to shine, almost immediately, as one of Congress’ most thoughtful voices on the geopolitical scene. Given her Muslim faith and her background as a Somali refugee, Omar should be a natural leader on issues including the state of the Middle East, the economic future of the African continent or how the world community can better manage the climate crisis that’s aggravating the most intense global refugee crisis since World War II.

Neo-colonialism is rearing its ugly head with a subtle vengeance as global players like China attempt to corner African resource and consumer markets while the U.S. recalibrates its troop-and-drone portfolio amid an uncertain presidency.

We should be having or highlighting conversations about all these things and pushing legislation.

Omar, along with her veteran Congressional Black Caucus colleagues Congresswoman Karen Bass of California and Congressman Gregory Meeks of New York, who also sit on the Committee, should be busily immersed in crafting a very coherent, visible and workable foreign policy agenda that gives voice to African American perspectives and priorities.

For one, it’s Black sons and daughters who end up on the front lines of global hot spots and return to worrisome domestic receptions back home. And the past few months could have easily been partly dominated by a “Black Diaspora” conversation highlighting pressing issues impacting Black populations in Africa, the Caribbean, South America and elsewhere.

With Omar’s background – which more likely than not played a role in House Democratic leadership’s choice to assign her to the Committee post – she could be an intellectual superstar on any number of issues, including immigration, that directly improve the situation of Somali constituents in her district, the largest such concentration of its kind in the country.

And her critics are unfairly piling on. This is fast looking like a festive bullying bash fest on a barely influential Black Muslim freshman Congresswoman who simply thinks differently (if not always clearly) on a topic that does require some fleshing out.

Yet, it is unfortunate that Omar finds herself in a position that does her district, Minnesota’s 5th, very few favors (other than blowing up the spot of a controversial Congresswoman). It houses the largest black population in the state, and its poverty rate – as tragically expected – is nearly 3 percentage points higher than the national average (12.3 percent); its child poverty rate is almost on par with the national average (21 percent).

The massive Somali population within Omar’s district continues to struggle under the constant threat of excessive migrant profiling, police violence, federal surveillance and the unpleasant tag of being a nest for fundamentalist recruits.

Economic struggles, while less severe than what they faced in their home country, exacerbate the issues above (not to mention the fractured state of Somalia and whether it could ever be something to return to).

Israel, comparatively speaking, is the least of Omar’s constituent’s problems. Perhaps it should be less of Omar’s, unless she wants to be primaried.

But if she wants to continue to discuss the matter, she should do so from an informed — and informative — place.

Ilhan Omar Can Fix This. Here’s How.