I’m Black And Jewish. Ilhan Omar’s Tweet – And The Backlash – Are Tearing Me Apart 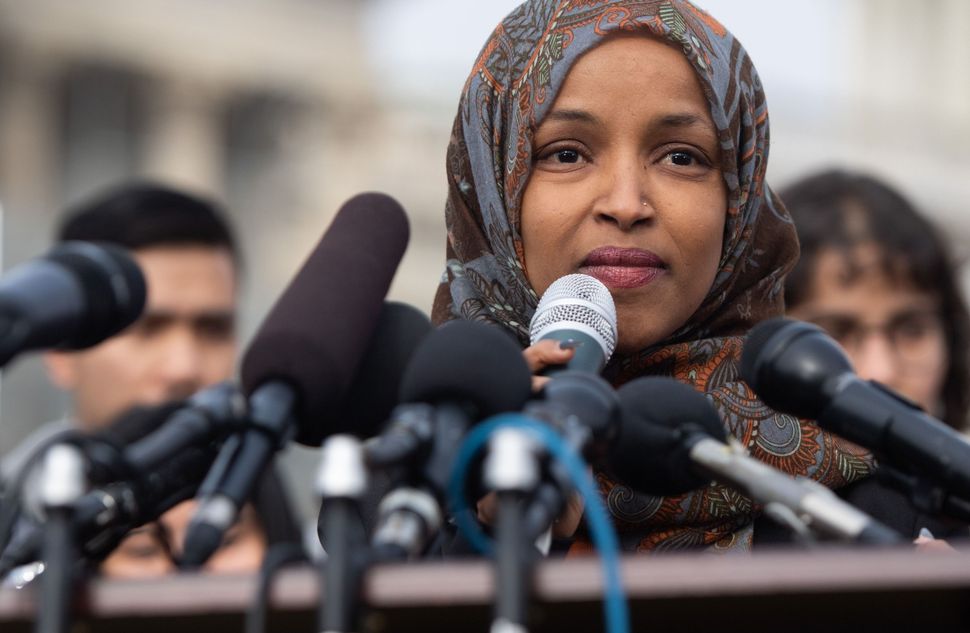 Yesterday, I opened my Twitter timeline to find friends, allies, and colleagues pitting racism and anti-Semitism against each other. The battle lines had been drawn, and I was, as I often am as a mixed race Jew, caught in the middle.

Sunday afternoon, Rep. Ilhan Omar tweeted a response to Glenn Greenwald, who was musing about GOP leader Kevin McCarthy’s motivations for threatening punishment for herself and Rep. Rashida Tlaib. “It’s all about the Benjamins,” Omar wrote, quoting a famous Puff Daddy song. “The Benjamins”, of course, are $100 bills — with Benjamin Franklin’s image on them.

Forward Opinion editor, Batya Ungar-Sargon, threw Omar a lifeline, asking her to clarify who she was talking about, spelling out quite clearly that Omar had used an anti-Semitic trope. Rather than backing off, though, Omar leaned in, quoting Ungar-Sargon to answer her question with one word: AIPAC.

And then began the fallout. People from across the Jewish and pro-Israel worlds began to condemn Omar. Others came out in her defense, writing that Omar had not done anything anti-Semitic.

By this morning, it was virtually all people on my timeline were talking about.

When Omar won her seat in Congress, I was excited. I am a firm believer that government should represent the diversity of its constituents, so watching an African hijabi refugee sworn in felt momentous.

When Omar’s 2012 tweet about Israel hypnotizing the world surfaced, it was hurtful, but I did not speak out. There were enough people calling it problematic that I felt no need to join the chorus. Omar apologized, and I felt relieved. This tweet was years old, after all, and we all have to unlearn the xenophobias we have been raised with — including ambient anti-Semitism here in North America.

But these tweets? They were beyond the pale.

In less than five words, Omar managed to conjure centuries of anti-Semitic propaganda and conspiracy theories. It was so flippant, I was terrified.

As Ungar-Sargon explained, “Both tweets were offensive because in both, she got the story wrong in a way that fit neatly into the grammar of anti-Semitic stereotypes that have caused Jewish suffering, slaughter, and even genocide for centuries.”

The condemnations of Omar were swift. Calls were made to the leader of the Democrats to censure her, and even to remove her from the House Foreign Affairs Committee. By mid-day, Speaker Nancy Pelosi had issued a statement on behalf of the Democratic leadership, explicitly condemning Omar’s remarks.

Omar soon followed with her own statement, expressing regret that her criticism of lobbyists had invoked anti-Semitic tropes, and apologizing unequivocally.

I was grateful for both statements.

What I did not expect, though, was to find friends and colleagues openly empathizing with Omar, adding that it is a hard day to be black or Muslim on Twitter. Most of these remarks did not acknowledge the anti-Semitism in Omar’s statement, or that it has been a hard day to be a Jew on Twitter too.

Of course, Omar has been on the receiving end of horrendously racist and Islamophobic vitriol — not only in the aftermath of these tweets, but astonishingly regularly. It is on all of us to denounce this as the hate that it is outright.

But to give Omar a pass on anti-Semitism because she is a black hijabi refugee is deeply problematic. And as a mixed race Jew who walks in both the black and Jewish worlds, this sort of discourse tears me in two.

Anti-Semitism is on the rise, and if I can’t count on my black community to have my back against it, I feel completely alone out here. This feels especially raw when I speak out daily against anti-black racism in the Jewish community and beyond.

And if progressives, who are dedicated to working toward equality and against oppression of all kinds, won’t stand against anti-Semitism, who will?

As I watched the fallout from Omar’s tweets take over my timeline, it was clear to me that these divisions are not healing themselves. Now is the time for serious dialogue. We must listen to hard truths about how we are hurting each other — and engage in dialogue grounded in a real commitment to understand the histories of anti-Semitism, anti-black racism, and Islamophobia.

Coming together now is especially important as more black Jews enter Jewish communal spaces. But beyond that, it is a matter of life and death as the growing threat from white supremacists casts a dark shadow over all of our communities.

If we are unable to call one or the other out, we are failing in our mission to make our country a safer, more equitable place. And we are putting the people who suffer at the hands of both in an impossible position.

I’m Black And Jewish. Ilhan Omar’s Tweet – And The Backlash – Are Tearing Me Apart