If You’re Only Calling Out Anti-Semitism On One Side, You’re Enabling It. 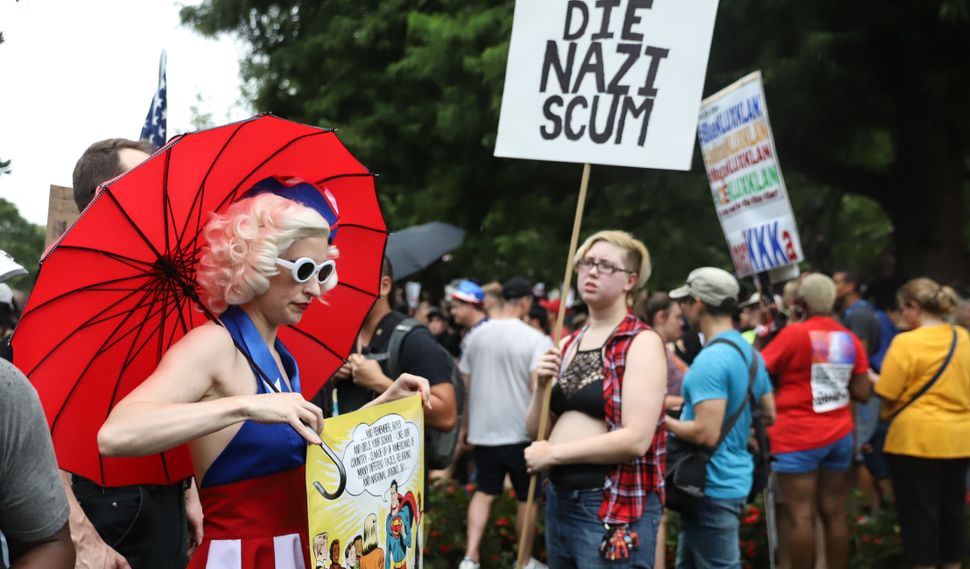 I write these words with hesitation and with little joy, for Sarsour has an impressive resumé of activism when it comes to laudable domestic causes. She has contributed much to the chipping away of the neo-fascist edifice now housing a shattered America. She claims to be committed to fighting for everyone’s dignity, having once stated that “We can disagree & still love each other, unless your disagreement is rooted in my oppression & denial of my humanity and right to exist.”

It is a lovely sentiment, one that we should all be able to endorse. Unfortunately, Sarsour and some of her comrades on the left have failed to live up to this ideal when it comes to the Jews, a failure that has contributed to the toxic climate of anti-Semitism that is growing at an alarming rate.

We hear a lot about right wing anti-Semitism, especially in the wake of the Unite the Right rally in Charlottesville, Virginia that left one woman dead and the tragic massacre in Pittsburgh that left 11 Jews dead. Less often discussed in liberal spaces is the anti-Semitism on the left.

Earlier this year, Sarsour admonished the attendees of the Islamic Society of North America’s conference to not “humanize” Israelis, because they are the “oppressor.”

Why is it acceptable for someone who demands recognition of her humanity to deny that to others? What right does she have to homogenize an entire state and its people with little regard for the complexities of everyday life in a region so fraught with conflict?

More recently, Sarsour doubled down, castigating establishment Democrats by implying that their patronage of the Jewish state is antithetical to their alleged commitment to human rights. “The place where the Democratic Party has a downfall is that the same people who will support refugees and criminal justice reform then support for example the state of Israel,” she said.

“The place where the Democratic Party has a downfall is that the same people who will support refugees and criminal justice reform then support for example the state of Israel.” @lsarsour pic.twitter.com/cmpR6f09wJ

Sarsour further contended that fighting for Palestine is integral to the progressive movement, and “if you’re not willing to go all the way progressive, you’re just not going to win against Donald Trump in 2020.”

At the risk of stating the obvious, the resolution of the Israeli-Palestinian conflict is not a prerequisite for ousting the Trump administration. But Israel/Palestine — and by implication, global Jewry — remains a politically volatile issue at both ends of the political spectrum.

Evangelical Christians believe that Jewish control of Israel is necessary for the Second Coming of Christ and the End of Days. Meanwhile, for the alt-right, Israel represents an imagined (and in many respects imaginary) ethnocratic quasi-fascist state that should be emulated in America. Richard Spencer has unabashedly expressed such admiration in public.

This should not be mistaken for admiration for Jews; the Diaspora Jew remains a despised creature among the alt-right, one who is described through the same stereotypes deployed by the populists and demagogues of the early 20th century. In their eyes, the Jews make up a secret conspiratorial international cabal that abuses its disproportionate political and economic influence to subjugate the industrious (white) citizens of Europe and America.

Much like the Rothschilds of former times, George Soros is the emblematic “International Jew,” to borrow an idiom from Henry Ford’s inter-war racist lexicon, a phrase that still resonates today. They fear Jews with power, because powerful Jews are globalists. And globalism is the antithesis of America First.

Unfortunately, things are not so different on the left among self-proclaimed progressives, like Tamika Mallory, Students for Justice in Palestine, Jewish Voice for Peace, Linda Sarsour and others.

They insist that the fate of civil rights in America hinges upon the liberation of Palestine, which means ending Israel as a Jewish state, irrespective of the fate of its Jewish inhabitants and their right to exercise national self-determination.

They have insinuated Palestine — and Palestine alone among international issues — into their domestic agenda.

It may be hyperbole to state that the popular mantra “Palestine will be free from the river to the sea” has willful genocidal implications, but it certainly implies erasure: the erasure of the identity, history and collective memory of nearly half of the world’s Jewish population, who returned to their people’s historical homeland because European and Arab states tormented, rejected and murdered them.

When you start to pay attention, the tropes of Jew hatred on the right are matched on the left. In 2012, Ilhan Omar, a refugee from Somalia and, as of November 7, one of the first Muslim women elected to Congress, stated that “Israel has hypnotized the world, may Allah awaken the people and help them see the evil doings of Israel.”

Although this indictment is six years old, she defended it on the eve of the 2018 midterm elections.

But accusing Israel of hypnotism is not simply poetic license, because it echoes the medieval stereotype of the diabolical Jew who used his Kabbalistic powers to exploit and vanquish upstanding Christians.

It is in this context that we must understand the perniciousness of Sarsour imputing “folks who masquerade as progressives but always choose their allegiance to Israel over their commitment to democracy and free speech.”

Accusing Jews of dual loyalty is a trope that goes back to the eighteenth century, most famously to articulated by Johan Gottlieb Fichte who characterized the Jews as a “state within a state” posing a threat to the welfare of the German nation.

The language of anti-Semitism may be old, but it is not outmoded. It has been recycled and remains fashionable and politically expedient.

One can replace the word “globalist” with “Zionist” and the message is still the same: a trans-national network of Jews extending its tentacles across continents, covertly embedding itself into nook and crevice wherever power resides, wherever power can be exploited.

I do not think Linda Sarsour is an anti-Semite. She certainly does not mean to be one. But does it matter?

President Trump may not have anything against Jews either, yet it is clear that after two years in office, his malevolent rhetoric has incited racial violence up to and including the Tree of Life massacre.

Fortunately, such violence has not emanated from the left. The Democratic Party has not been infiltrated and conquered by bigotry and fanaticism like its Republican counterpart. It has not been infected by anti-Semitism as the British Labour Party has, where Jeremy Corbyn’s disciples have made it abundantly clear that the Jews — or at least a certain type of Jew — are not welcome.

It is imperative that this does not happen here. But this will take work. For the Democrats to build a progressive movement that does not enshrine anxiety and loathing over illusory Zionist power as a guiding principle, they must be vigilant. While the greatest threat to the Jews (and to all minorities) in the United States today emanates from the right, the rhetoric of anti-Semitism is alive and well on the left, and its principal tropes — global Jewish power, insidious control of governments, banks and law enforcement agencies, a tribal loyalty that is incompatible with true patriotism — are nearly identical to those propagated from the right.

Their genealogy is old, their potency is tenacious, and their allure transcends political affiliation.

If You’re Only Calling Out Anti-Semitism On One Side, You’re Enabling It.