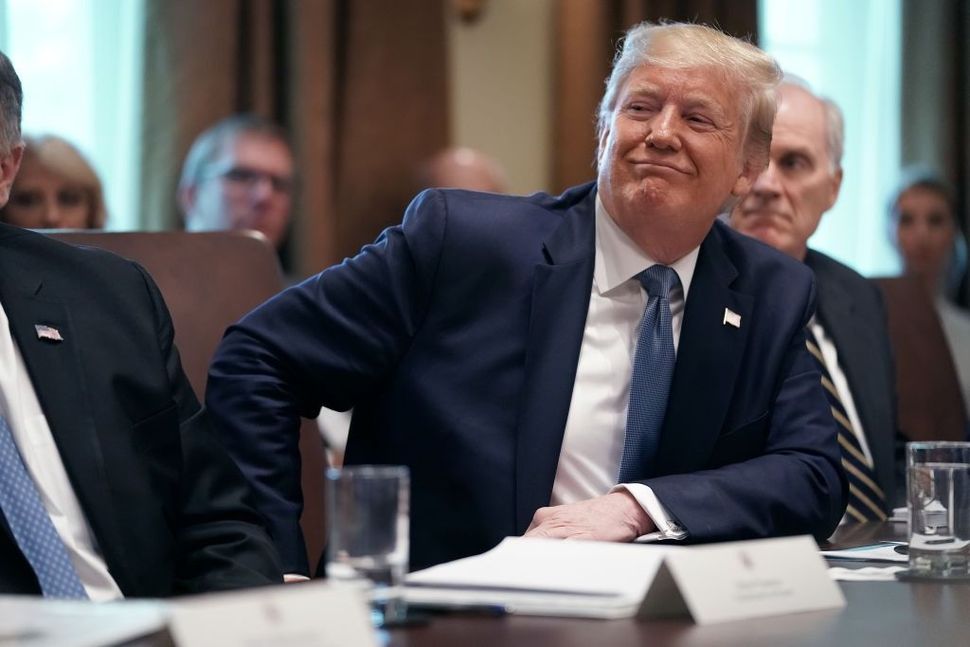 In so doing, he added insult to injury, compounding Anti Semitism to his racism.

This may seem counterintuitive. Wasn’t Trump trying to defend Israel, and by extension, Jews? But anti-Semitism is often counterintuitive. Indeed, what makes anti-Semitism so dangerous and unique as a form of bigotry is not just the intensity and persistence of the oldest prejudice on earth, but how it evolves in a society to leave Jews exposed and without protection.

To the anti-Semite, Jews are always the reason they are struggling, or their culture is struggling. Jews are the force that keeps marginalized communities powerless, or the reason members of the dominant culture are struggling. Thanks to this conspiracy theory, we end up trusted by few, hated by many, and protected by none. The end is always tragedy for us.

When Trump tells his base that “Globalists” are the reason why they’ve fallen on hard times, like he did in his closing ad of the 2016 campaign, he is telling them it’s the Jew’s fault.

When he says there are good people on both sides, like he did in Charlottesville, where Neo-Nazi’s carried torches and chanted “Jews will not replace us,” he is telling them that hatred of Jews is acceptable.

And when he tells people that the reasoning behind his racist invective is Israel, he is blaming Jews.

There are of course real tensions in the Democratic Party and the progressive left surrounding Israel. And there are legitimate concerns of rising anti-Semitism. But that wasn’t what Trump cared about. Instead, he’s using American Jews — and our concerns and fears — for political gain. He was asking us to defend him against “those” Democrats — after his racism towards them was exposed.

By choosing to bring Israel into this specific debate, a debate which has absolutely nothing to do with Israel or the Jewish people, and by using the Jewish State to defend himself, Trump intentionally used Jews as a shield and a wedge issue.

Trump intentionally chose to divide Democrats against Jews, to stoke mistrust. And in so doing, he was attempting to break the bonds of solidarity between American Jews and other marginalized groups, the same bonds that underlie the neo-Nazis’ chants of “Jews will not replace us.” Trump is trying to siphon Jews off, either by our own choice or by the erosion of trust by other marginalized groups. If we would ever consider supporting him, we certainly couldn’t be trusted to defend them.

Using Jews as a shield and a wedge, knowingly attempting to divide us, is an act of anti-Semitism and it will, by definition, spread anti-Semitism.

It could work. Some Jews may choose to back Trump in this fight. They may choose to oversimplify the real but complex challenges on the left as proof of the left’s deep hatred for Jews, and accept his public displays of affection for Israel as proof that he is “with us.” More Jews could join his electorate.

This would be a mistake. Jews will never be fully accepted into his nation, a nation built on the foundations of White Nationalism. There is no home for Jews in White Nationalism. To white supremacists, Jews are responsible for the elevation of “inferior races.” How else could they gain power if not for the subversive Jew?

Donald Trump wants to use this tension to destroy his political opponents, consolidate power, and distract us from his own bigotry in order to justify the pursuit of fundamentally un-American policies at home and abroad. Every Jew should be concerned. In the history of our people, when bigotry rises, when nationalism rules, when the world is divided between “us” and “them,” Jews are never part of the “us.” We’re always a part of the vulnerable “them.”

Oren Jacobson is a civic entrepreneur, organizer, and consultant. He’s the co-founder and Co-Executive Director of Men4Choice and the former National Chapter Development Director for the New Leaders Council. He holds a Master’s in International Relations from the University of Chicago, a Master’s in Economics and Policy Analysis from DePaul University, and a Master’s in Business Administration from Regis University.