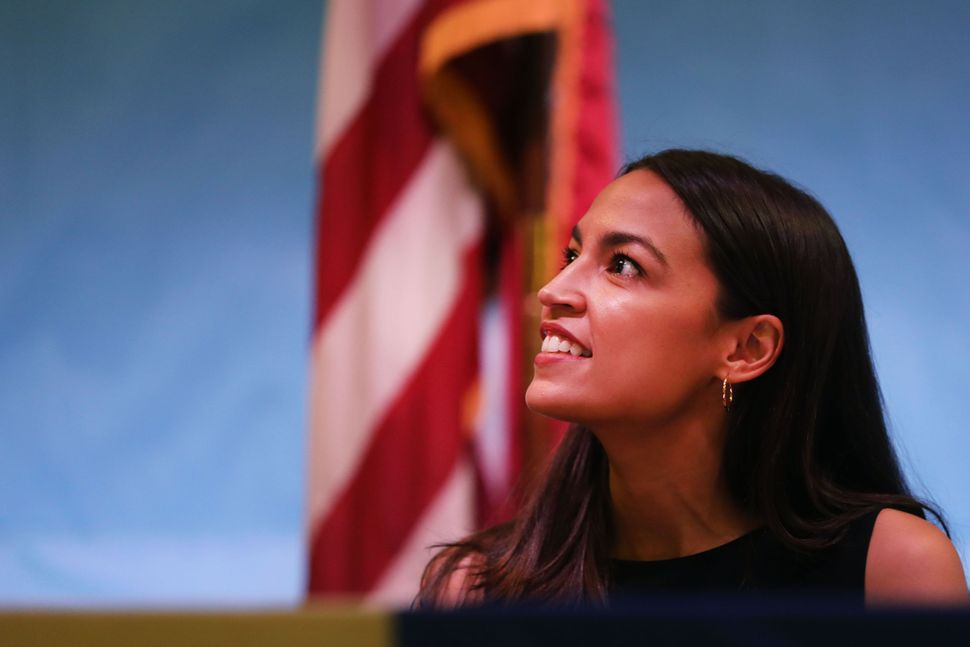 In a radio interview this week, Congresswoman Alexandria Ocasio-Cortez broke a self-imposed silence about Israel.

In addition to comparing the Trump Administration to the Netanyahu Administration, AOC said that it’s not anti-Semitic to criticize Israel. “We don’t engage in any other country like that. We don’t talk about the U.K. like that, we don’t talk about China like that, we don’t talk about the United States… If you criticize any other country, they don’t say ‘Do you believe in Britain’s right to exist?’” She said. “The same way that me criticizing Trump doesn’t make me anti-American, criticizing the occupation doesn’t make you anti-Israel, frankly.”

The interview sparked a lot of debate on social media, with many accusing her of tokenizing fringe Jewish groups like IfNotNow who got a shout out.

But the truth is, AOC was representing a host of young American Jews. With her criticism of the occupation, and her vocal opposition to Trump’s treatment of immigrants, the Bronx congresswoman is solidly in line the issues many young Jews are passionate about.

First, there are the less-interested – drawn from the 35% of American Jews who, according to the most recent survey conducted by the AJC, disagreed somewhat or strongly with the statement, “Caring about Israel is a very important part of my being a Jew.” These are young Jews to whom Israel holds little meaning and allure, and their normal engagement with the country reflects these attitudes.

Second, there are the avid and increasingly right-wing supporters of Israel. This group is especially prevalent among Orthodox Jews who in the past found themselves excluded from the larger establishment. The younger cohort of this group, most prominently represented by the conservative commentator Ben Shapiro, grew up within institutions that expressly supported the aspirations of the Israeli right.

Finally, there are the young American Jews who have become stridently critical of Israel. These range from Liberal Zionist writers like The Forward’s Peter Beinart, to young Jewish activists in J Street U and IfNotNow, to the transparently anti-Zionist Jewish Voice for Peace. Plenty divides them, to the point of bitter recriminations, but they are united by a distinct willingness to not only criticize specific Israeli policies but to identify the current Israeli government as part of a global reactionarism. When AOC told her interviews that “the Netanyahu administration is very much like the Trump administration,” plenty of heads here were nodding.

They are the most receptive to AOC, and in turn she appears to genuinely admire their activism. When she issues strong criticisms of Israel or of American support for Israel, she can count on the support of this wide bloc.

More importantly, Trump’s draconian border measures have activated a unification of the first and third groups of young Jews, represented in part by a new non-profit, Never Again Action, which has been organizing actions against ICE all over the country.

Also deserving of our attention and support: 36 young Jewish activists were arrested today for nonviolent direct action against migrant conditions in Elizabeth, NJ.

You can learn more about their advocacy and support their bail fund here ⬇️ https://t.co/oyoOJZdwh8

AOC has praised their work, and there’s clearly a feedback loop of positive energies between the group and the congresswoman.

But if the group is small, the feelings it represents – absolute horror as Jews for what’s happening on our southern border – is very widespread among young Jews.

AOC does not and cannot claim to speak for all Jews, even if her theory about a possible Sephardic heritage turns out to be true. But something much more interesting may be at play in her appeal to young Jewish progressives.

Over the past two years or so, the non-Jewish Nikki Haley has become an outspoken hero for the pro-Israel right in the Jewish community. She is a unifying figure beloved by both supporters of President Trump, who appointed her, as well as Never Trumpers who sympathize with the administration’s Israel policies.

AOC can serve the same function for the American Jewish left, an eloquent non-Jewish standard-bearer for its ideas who straddles the divides. Only time will tell if this is something she seeks, but she has already unified a rather disparate group of American Jews behind her desire to challenge the strictures of discourse.