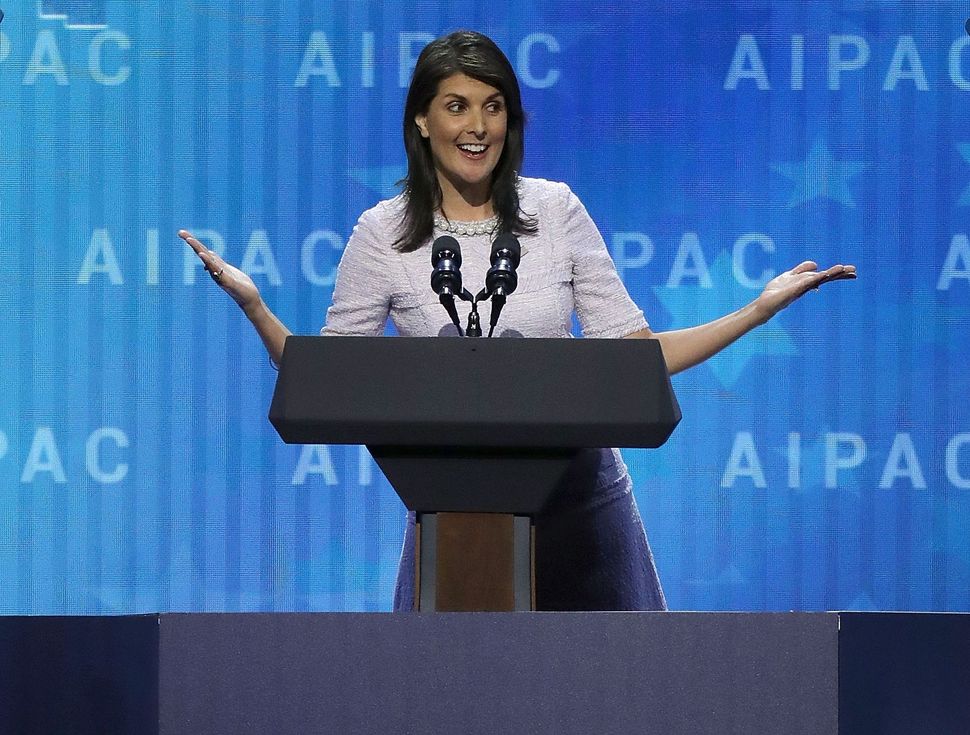 Nikki Haley announced her resignation on Tuesday in the presence of Jared Kushner and Ivanka Trump, arguably the two most prominent Jewish Republicans in the country. While coincidence is the likely explanation, the image of Jared and Ivanka in the Oval Office still highlighted an important constituency that Haley has done much to woo during her tenure.

For Jewish Republicans, Haley joins a pantheon of American figures who have stood up for Israel in the hostile terrain of the United Nations. One of them, former Ambassador John Bolton, is President Trump’s national security advisor. Unlike those figures, however, Haley has the opportunity to exploit the increasing partisan divide on Israel.

For almost two years as America’s Permanent Representative to the United Nations, Haley spoke directly to this constituency, whose political interests conveniently overlap with those of white evangelical Republicans.

It hasn’t always been a strictly partisan matter. Then-Ambassador Daniel Patrick Moynihan’s forceful denunciation of the UN’s infamous “Zionism is racism” resolution in 1975 still lingers in the minds of many American Jews as a moment when their government unreservedly defended them against Israel’s enemies, and presented the case for supporting Israel as not only a strategic imperative but a deeply moral one.

Moynihan, who would later be elected as a Democratic Senator from New York, spoke in soaring terms that symbolized America’s ironclad commitment to the Jewish people: “The United States rises to declare before the General Assembly of the United Nations, and before the world, that it does not acknowledge, it will not abide by, it will never acquiesce in this infamous act.”

Haley, largely believed to have her gaze set to 2020 or 2024, has cemented an image as a latter-day Moynihan for Jewish Republicans. While Haley faithfully executed the foreign policy priorities of the Trump administration, on the Israeli-Palestinian conflict she chose to forcefully stand by the side of the administration and serve as its chief spokesperson, overshadowing Kushner and Jason Greenblatt, who are charged with shepherding the process along.

Above anyone else, Haley was the face of the decision to cut off American funding for UNRWA and people-to-people programs that include Palestinians, leave the UN Human Rights Council, and defend the administration’s move of the U.S. Embassy to Jerusalem.

During her time in office, she also staked out positions far to the right on Israel, including blocking the appointment of former Palestinian prime minister Salam Fayyad as a UN envoy to Libya in 2017, later promising to block all Palestinian nominees for UN positions.

These are not the actions of a politician merely seeking to check off the pro-Israel box on the way to a presidential campaign, but one who is trying to burnish a particular and uncompromising pro-Israel message.

Trump himself is too politically toxic to win more than the estimated 24% of American Jews who voted for him in 2016. It is the next Republican candidate who will contest a national election where Israel is a truly partisan issue, a fact Haley is certainly aware of.

Republicans, of course, have invoked Israel in previous elections. Who can forget Mitt Romney’s assertion that Obama threw “Israel under the bus”? But the Democrat, in refuting those claims, often cited their own pro-Israel bona fides, such as the Obama administration’s record aid to Israel.

Whoever the next Democratic candidate is will be in a trickier predicament. The option of one-upping the Trump administration is not on the table without wholeheartedly agreeing with those very decisions that are denounced by the growing activist base of the party. Yet, at the same time, Democrats will still need the support of moderate Jewish voters in Ohio and Florida, who won’t necessarily associate Haley’s pro-Israel credentials with Trump.

Couple this with the fact that the Democratic Party has seen an influx of active supporters who don’t unambiguously back the two-state solution, including Rashida Tlaib and Alexandria Ocasio-Cortez, giving Democratic Jews something to worry about in their own camp.

Therefore, Haley has an opportunity to make a serious play for the 46% of American Jews who supported Trump’s decision to move the embassy, a number that includes many who don’t approve of Trump otherwise.

They may not represent a decisive force in numbers nationally, but American Jews are a coveted constituency that has long resisted political overtures from Republicans.

Increasingly, it is also Orthodox activists who are most associated with a conservative style of pro-Israel advocacy that is struggling in more progressive denominations, as anyone who has been to a recent Celebrate Israel Parade can tell you. In this worldview, Israel is a deeply moral nation under attack by forces of unalloyed evil. It is a view without room for sensible criticism of Israeli policies, including settlement construction.

Ambassador Haley embodied that style during her time at the UN. If she decides to run for President in the future, it is in image she will surely promote, and one that may divide the Jewish community along starkly partisan lines.