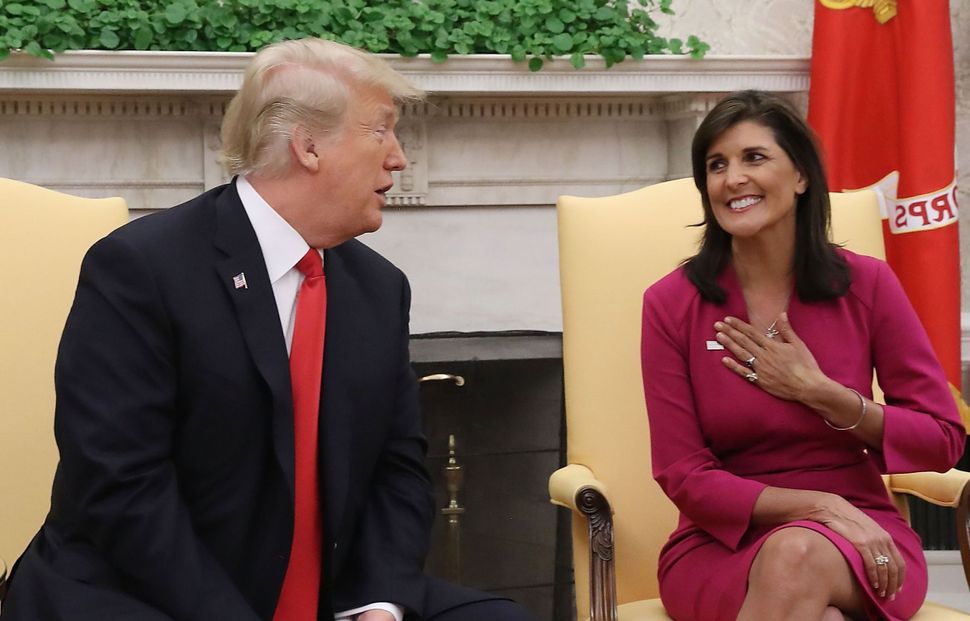 U.S. President Donald Trump announces that he has accepted the resignation of Nikki Haley as US Ambassador to the United Nations, in the Oval Office on October 9, 2018 in Washington, DC. President Trump said that Haley will leave her post by the end of the year.

Nikki Haley’s abrupt departure from her position as US Ambassador to the UN quickly sparked hope in the beleaguered ranks of Never-Trump Republicans, eager for the former South Carolina governor to challenge President Trump in the 2020 Republican primaries.

But though foreign policy conservatives want to see in Haley an alternative to the president’s erratic and belligerent diplomacy, her threats to “take names,” her harshly punitive treatment of Palestinians and disregard for international consensus were consummate expressions of Trump’s truth-bending triumphalism.

The first indication that Haley meant nothing short of a smackdown of Palestinian diplomacy came in February 2017, when she vetoed the appointment of Salam Fayyad, an ex-prime minister praised as a “pragmatic moderate,” to lead the UN mission to Libya. His skills might have been helpful in improving the crisis there, but as Haley boasted to AIPAC shortly afterwards, “We said no and we had him booted out.”

To the cheering crowd, she dismissed Fayyad’s selection as a “freebee” to the Palestinian Authority, of which none would be allowed until the Palestinians caved. “I wear heels, but it’s not a fashion statement. It’s because if I see something wrong, I’m gonna kick ‘em every single time.”

In office, Haley has promoted every facet of the Trump-Kushner program to force Palestinians to submit to a historic defeat. She threatened that she’d be “taking names” of countries who voted to move the US embassy to Jerusalem, which was done in clear violation of that city’s status under international law. (The warning’s meaning became clear when those countries were disinvited from a “friendship party” Haley threw after the vote.) She defended cutting off aid to the UN’s refugee agency UNRWA, seen by many analysts as a step toward stripping Palestinians of refugee status.

To be sure, the US was no bastion of Palestinian solidarity under Haley’s predecessor Susan Rice, who in her own words worked in “lockstep” with Israel. With the glaring 11th-hour exception of its abstention on UNSC 2334, which allowed the anti-settlement resolution to pass, the US under Barack Obama consistently protected Israel at the UN, including a 2011 Security Council veto of a similar resolution on settlements.

But as one-sided as it was, prior to Trump and Haley, the US was careful to signal to Palestinians that it supported the underpinnings of international law that guaranteed their human rights.

These gestures have disappeared. Naturally, Haley has never offered a condemnation of settlement expansion or even a mere expression of concern for any human rights violation. She has been silent on the detention for political reasons of US citizens entering Israel. She praised Israel’s “restraint” immediately after the IDF had killed 62 protesters at the Gaza fence. Her aggressive policing of Israel criticism, and threats to penalize countries or agencies like the UN Human Rights Council that defy the US on Israel, give Israel a clear signal that it can do whatever it wants.

This aggressiveness has of course made Haley a darling on the pro-Israel and pro-interventionist right. Many of them, like the ever-hopeful but rarely prescient Bill Kristol, imagine that her more traditional hawkishness could be a platform for challenging Trump.

It’s hard to see how that challenge would work: Trump has already given Israel everything it wants, while supporting the Saudi war in Yemen and doing nothing to scale back our role in conflicts elsewhere in the Middle East. His peace plan, whenever it is finally released, is only likely to cement his bond with Israel, the only country where trust in the US’s president has increased since he took over from Obama.

Foreign affairs are rarely a deciding factor in elections, except when voters face a decision to go to (or expand) war. It should be remembered that Trump beat 16 Republican contenders in 2016 while adopting anti-war rhetoric, however disingenuously. The prospect of Nikki Haley dethroning Trump over the need for a more muscular foreign policy is likely to remain in the realm of neoconservative fantasy.

But whatever Nikki Haley is planning for her future — and at 46, it’s pretty likely she is planning something — her time as US Ambassador should be remembered as a low point. Bullying rhetoric aside, one of her worst moments came last May, when Haley performatively walked out of a UN Security Council session as soon as Palestinian Permanent Observer Riyad Mansour had begun to speak. The action went beyond simple rudeness and undiplomatic behavior. Like blocking Fayyad from the Libya role, Haley’s action communicated that, to her, simply being Palestinian is a status offense.

Of course, Haley’s walkout was also an immature thing to do, conjuring the image of a kid with fingers in ears chanting “la, la, la, I can’t HEAR you!” In that, her approach has been identical to that of the Trump administration. With no daylight between Haley and her ex-boss, there’s not much chance she will beat him.

Peter Feld is political director of The Insurrection, a digital strategy firm in New York, and a writer based in New York. His writing has appeared in the New York Observer, Gawker, Radar, Ad Age, and the New York Post.