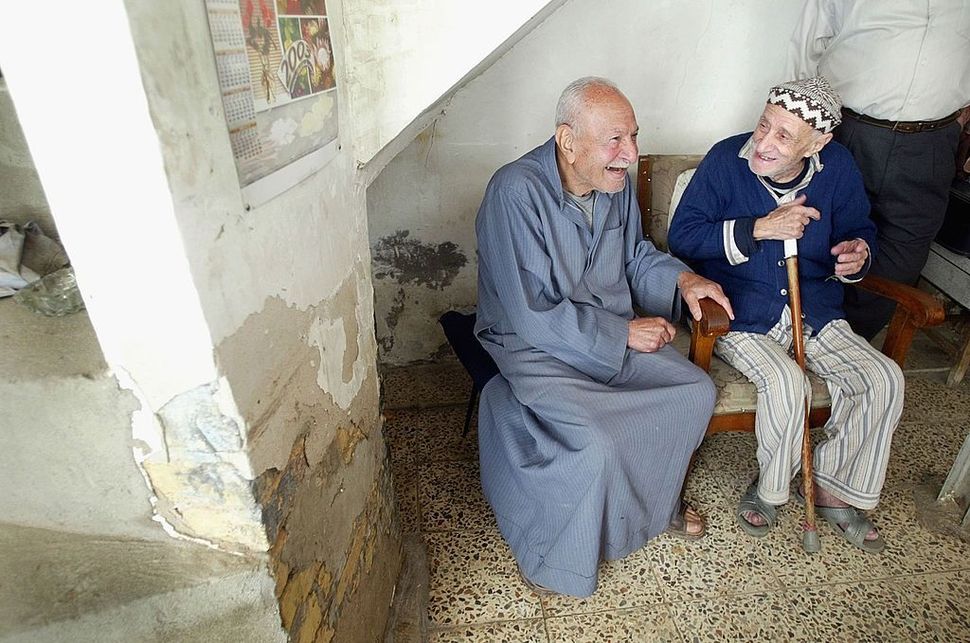 BAGHDAD, IRAQ - APRIL 17: Iraqi Jews Yousef Salman (L), 79 and Tawfiq Sofer, 75, sit in Sofer’s home in the tiny remaining Baghdad Jewish community on Passover April 17, 2003 in Baghdad, Iraq. Salman’s brothers left Iraq in 1948 and he has not seen them since. Both have no remaining family in Iraq. The community members are not formally celebrating the holiday this year due to a lack of electricity, food and other problems associated with the war. The family has lived their entire life in Baghdad while the Jewish community has dwindled to approximately 60 members from around 400,000 in the 1960’s. (Photo by Mario Tama/Getty Images) Image by Getty Images

This past week, the government of Israel announced that the history of North African Jews during World War II would be incorporated into the Holocaust curriculum.

“For years, the story of Jews living in Muslim countries under the Nazi occupation has been absent from our discourse,” Minister of Education Rafi Peretz said. “The painful stories of thousands of Jews who were sent to concentration camps and forced to participate in the death marches.” If the new curriculum is intended to foster a sense of belonging, then why isn’t the history of the Farhud—the 1941 attack against the Baghdadi Jewish community—also included?

During April and May 1941, Iraq experienced a military coup, led by the anti-British and pro-Nazi Rashid Ali al-Gaylani. During this period, the regime protected the Jewish community. On the eve of the regime’s defeat, British troops stationed outside of the city awaited Iraqi soldiers to enter the city. As the regime fell, and its leaders fled the capital, a power vacuum emerged in the capital.

In the absence of rule, a terrible slaughter occurred. A mob of former soldiers, police officers, right-wing youths, and city residents began attacking Jews. On the second day, they were joined by robbers and looters—some local, and some from outside the vicinity—as British forces refrained from intervening.

Over the course of two days, rioters killed 180 Jews, wounded at least 600 others, and looted 1,500 stores and homes. Between the attacks and the robberies, nearly 15% of Baghdad’s Jews—2,500 families—were physically or materially harmed before the Iraqi army entered the capital and restored order.

The Farhud disrupted the otherwise harmonious relations between Jews and Muslims during this period. Iraqi Jews had regarded Iraq as their homeland, and were largely integrated into the fabric of Muslim society. For Iraqi Jews and Zionists alike, the tragedy marked a turning point, and became rooted in the memory of the Iraqi Jewish community.

The question remains: If Iraqi Jews were so integrated, what prompted rioters to turn on their neighbors? Despite the historical complexity, the answer has increasingly been attributed to Nazi propaganda.

In fact, since 2011, a group of Iraqi Jews living in Israel has been petitioning to be recognized as victims of the Nazis. This would make them entitled to a monthly allowance and other benefits.

Nonetheless, the Israeli government to date has formally refused to recognize a connection between the Farhud and the Nazi regime, meaning that survivors of the Farhud are not entitled to compensation according to the Victims of Nazi Persecution Law.

Frustrated with the Israeli government, two Iraqi Jews representing 2,000 Farhud survivors took the matter to court. In February 2018, the Haifa District Court sided with the state, however, rejecting the lawsuit. According to Judge Ron Shapira, blaming Nazism for the Farhud was unconvincing because “anti-Semitism in its various forms existed before the Nazi regime rose to power.”

In their appeal to the Supreme Court, however, the plaintiffs made their links between Nazi Germany and Iraq more explicit. The pro-Nazi Iraqi regime that ascended to power following the military coup, they argued, was supported by an “agent of Nazi Germany.”

This agent, they claimed, was none other than the Palestinian nationalist leader, the Grand Mufti of Jerusalem, Haj Amin-al-Husseini.

According to this narrative, Nazi sympathizers in the new Iraqi government—even Husseini himself—received Nazi funding. They disseminated Nazi propaganda via radio to the Iraqi masses. Because of Husseini, they allege, Nazi views took root in the otherwise tolerant Iraqi population.

While the courts struggled to adjudicate the historical role of the Mufti, the prime minister of Israel has been much more decisive in his verdict.

Previously, Benjamin Netanyahu claimed that the Mufti was responsible for the Final Solution, and persuaded Hitler to murder all Jews, to say nothing of Baghdad.

Speaking before the World Zionist Congress in 2015, Netanyahu described a 1941 meeting with the Mufti and Hitler: “Hitler didn’t want to exterminate the Jews at the time, he wanted to expel the Jew. And Haj Amin al-Husseini went to Hitler and said, ‘If you expel them, they’ll all come here (to Palestine).” According to Netanyahu, Hitler then purportedly asked the Mufti, “What should I do with them?” To which the Mufti ostensibly responded, “Burn them.”

Netanyahu’s claims aside, the Supreme Court was not persuaded by the evidence presented to it. In March 2019, the court sided with the state. Nevertheless, the court criticized the narrow scope of the persecution law, noting that it did not reflect public opinion in Israel. According to Justice Daphne Barak-Erez, the law “blocks the possibility of granting full recognition to the victims” and recommended that the state award Farhud victims a one-time grant.

Curiously, despite Netanyahu’s claims surrounding the Mufti, and their support among certain segments of the Zionist establishment, his government has refused to amend the law that would recognize survivors of the Farhud as victims of Nazism. His actions, in other words, contradict his claims in matters concerning Iraqi Jews.

So does Netanyahu really believe that the Grand Mufti masterminded the death and destruction wreaked upon Baghdad’s Jewish community? If so, he bears responsibility for repeatedly sidelining Iraqi Jews in Holocaust memory, and denying them compensation as survivors. If not, he has knowingly promoted a lie with dire political consequences, even while Yad Vashem has repeatedly corrected his historical fabrication.

He owes the truth to those Iraqi Jews, who tether the history of the Farhud to the Mufti or Holocaust narrative but continue to find the memories of their community marginalized.