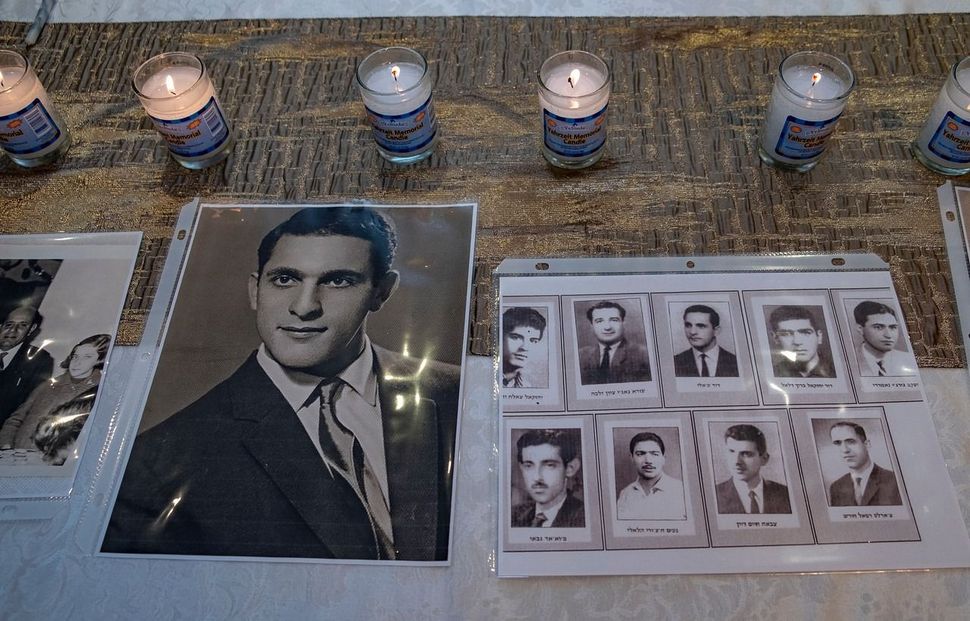 Memorial candles and pictures of the men hanged in 1969. Image by Raphael Abada

The men in the back asked for silence, and then one began to read the names of the Iraqi Jews killed half a century ago. There were 52 in all: nine hanged in a public square after a show trial in 1969, the rest disappeared by the secret police. The hangings were a de facto death sentence for Iraq’s 2,500-year-old Jewish community, pushing those who had not already fled to Israel to begin smuggling themselves out of their homeland.

About 150 people gathered Sunday at Congregation Bene Naharayim, the Iraqi synagogue in suburban Queens, for a commemoration of the hangings and the kidnappings. Old and young, refugees and their descendants, mingled in a mix of English and Hebrew with a Mizrahi, or Eastern, accent. They spoke of the significance of this milestone, and the long decline of Iraq’s Jewish community and its American diaspora.

“This oldest and proud Jewish community into which we were born is now all but gone, probably forever, sadly,” said Rita Katz, a private terrorism investigator, told the assembled. Katz’s father was one of the nine men hanged; her family escaped to Israel several months later.

“I’m sure that all of you here never forgot, and will never forgive,” she said. “And we will never, ever will stop loving and missing them, all of them.” 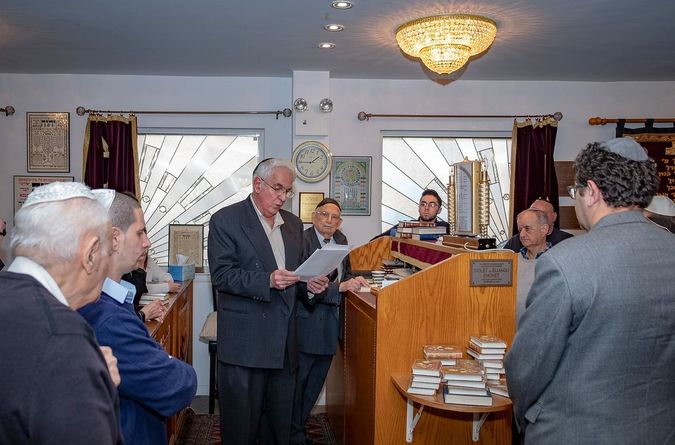 Shlomo Yadoo reading the names of the killed or disappeared Iraqi Jews. Image by Raphael Abada

Congregation Bene Naharayim, located in the Jamaica Estates section of Queens, was founded in 1984. From the street it looks like one of the larger houses that dot the neighborhood. Inside, its walls are covered in photographs of Jews in Baghdad and Basra, maps of Iraq and plaques of deceased members. It has 300 families paying dues, and 100 active members, according to Shlomo Yadoo, the synagogue’s president.

The community it serves is a minority of a minority in American Jewish culture: Iraqi Jews and their descendants, who are part of the diverse world of Sephardic Judaism, which broadly encompasses the Jewish communities whose roots lie from Spain and Morocco to Iran. In the years after the establishment of the State of Israel, in 1948, many Jewish communities were expelled from the Arab or Muslim countries they had called home for 2,000 years or more.

In 1968, the Ba’ath party rose to power in Iraq, in large part through the efforts of Saddam Hussein, who would go on to lead the party, and be dictator of Iraq, for 24 years. The Jewish community had already largely fled for Israel; its population in Iraq had gone from 130,000 in 1950 to less than 3,000 by 1969.

That was the year the regime hung 14 people accused of being spies: nine Jews, three Muslims and two Christians. Iraqi citizens held cookouts in the Baghdad square where the hangings occurred. In the early 1970s, the regime allowed the rest of the Jews to leave, and by the 21st century fewer than a few dozen Jews remained in the country. 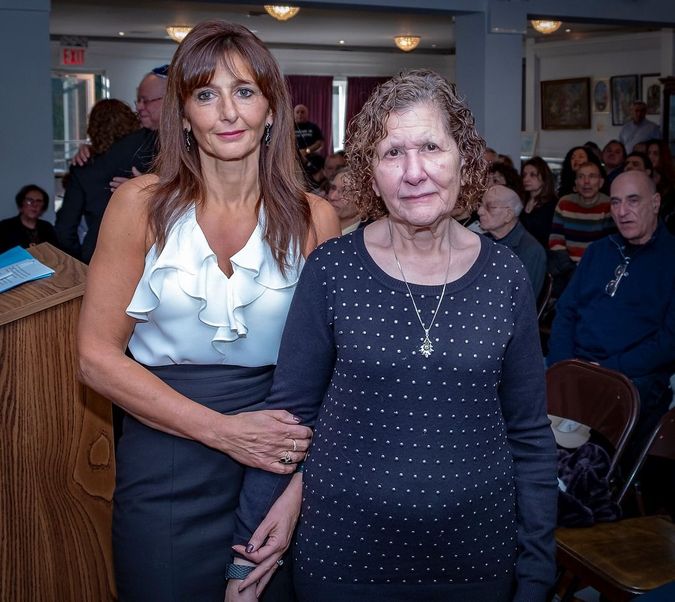 Iraqi Jews feel that their stories have been broadly forgotten in favor of remembering the tragedies that befell Ashkenazi Jews in Europe, whose descendants now vastly outnumber Sephardic Jewry in America.

“In Israel, and everywhere, they don’t know about Iraqi Jews, or Middle Eastern Jews,” said Ruth Shakarchy, head of Bene Naharayim’s sisterhood group, which organized Sunday’s event. “They know only about the Holocuast.”

Shakarchy said that besides the hangings, many Ashkenazi Jews also don’t know about the Farhud, the Iraqi Kristallnacht in June 1941 when widespread rioting caused the deaths of over 100 Jews and the destruction of over a thousand Jewish homes. 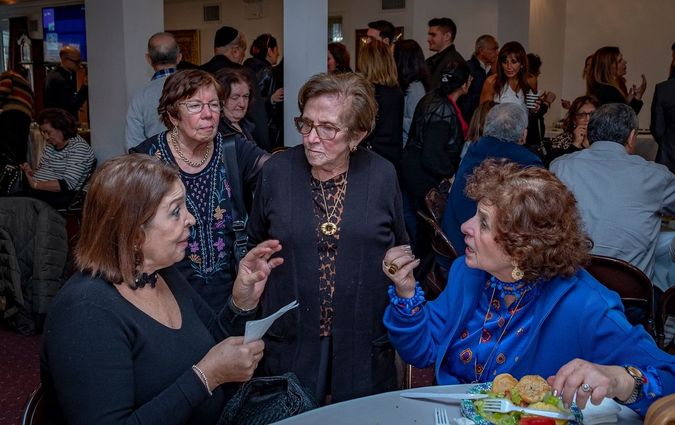 Women speaking at lunch after the program. Image by Raphael Abada

Jordan Salama’s mother fled Iraq with her family as a teenager. Though raised in Westchester County, Salama, 22, had his bar mitzvah at Bene Naharayim. In high school, he made a half-hour documentary about his grandparents’ journeys in the Mizrahi diaspora, and now hopes to expand his research on his Syrian paternal grandfather’s life in Argentina.

“All these stories keep circulating around in my head, and I think the most important thing is to keep tell them to other people so we don’t forget,” he said.

Part of the reason he wants to tell these stories, Salama said, is because they are often overlooked in the Ashkenazi-dominated American Jewish culture.

“I think it’s important to recognize that there was this time of paradise and coexistence [for Arab Jews], and that maybe hopefully it can happen again, if we’re given the opportunity,” he said.

After the program, the attendees lined up for an Iraqi and American Jewish spread of lunch fare: bagels and cream cheese; pita, eggplant, roasted eggs and pickled mango sauce (amba) for sabich, the Iraqi-Israeli street food; pound cake and muffins; date cookies and baklava.

Next to the desert buffet, Doris Sheena Zilkha, 66, born in Iraq, recounted how after the 1969 hangings the Jewish community was constantly in fear of disappearances, and fasted on Mondays and Thursdays in a gesture of frantic piety.

“People were landing on the moon, and here we were educated, and sitting ducks,” she said. 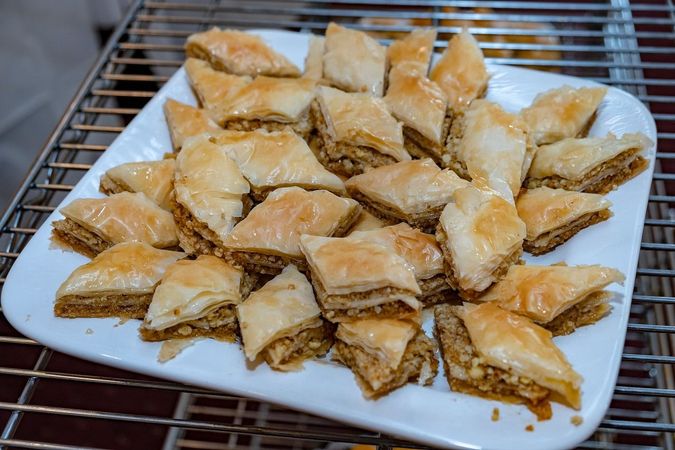 One of the family members of the disappeared men in Iraq was Felix Shamash, who was just a teenager when his father, Shoul, was taken from their home in October 1972.

Shamash said that the manner in which his father was taken away forever was as banal as the other stories mentioned Sunday. He had just come home from school when a member of the secret police arrived to escort his father away. The man promised that Shoul would be home soon. Before he left, Shoul put a toothbrush and a tube of toothpaste in his jacket pocket.

“We didn’t even go near him or kiss him,” Shamash recalled. “We were sad. You knew this was goodbye.”

Within six months, they had fled for Athens, where they received U.S. visas and immigrated to New York.

The family never officially learned the fate of Shoul. Shamash said he heard his father’s name once in a radio broadcast from outside Iraq, included in a list of Jews murdered by the regime. But because they didn’t have a date of death, or a grave, Shamash said that no one ever said kaddish for his father.

But a couple years ago, Shamash decided to change course. Now he uses the date of his father’s disappearance as the yartzeit, the anniversary of death.

“I figured I’m getting old, someone has to say kaddish for him,” he said. 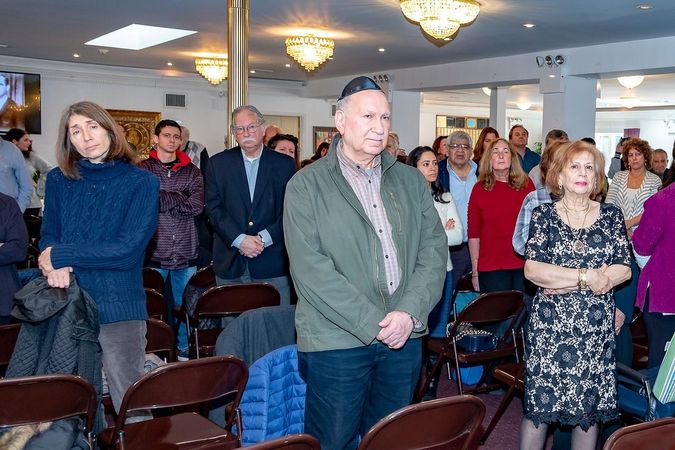 Listening to Yadoo read the names. Image by Raphael Abada

The photographs in this article were taken by Raphael Abada. You can view more of his photographs of the event here.