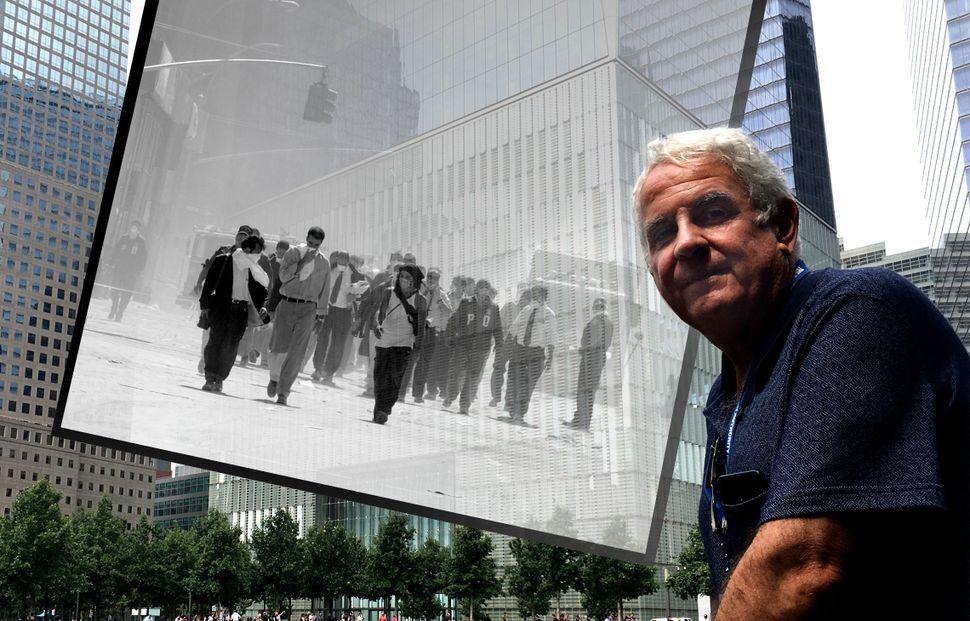 Since 1989, Port Authority engineer Shlomo Yadoo and his team were tasked with maintaining the structural integrity of Manhattan’s World Trade Center complex.

Structural failures occurred, however, on September 11th, 2001 that he — nor anyone — could never have anticipated.

From his current office high up at 4 World Trade Center, Yadoo and I overlooked the two rectangular pools of water where the Twin Towers once stood. Though the entire World Trade Center complex has been drastically transformed, he could still pinpoint all the details of the area before 9/11.

And yet, though it was his job to know such things, he can’t recall the floor layout of his former office on 1 World Trade Center’s 74th floor. “There are some things your mind doesn’t want you to remember,” he said wistfully.

On that “beautiful morning,” Yadoo was in the cafeteria thirty floors below his office to grab some coffee when he felt a “big sudden jolt” at 8:46 AM. His engineering instincts instantly kicked in. “The floor below is a mechanical floor, so I thought a transformer or something was blasted,” said Yadoo, “but then I could see debris outside [the windows], and it struck me that it could be something external.”

Things were calm at first, but as he descended below, the staircase became increasingly crowded, with fireman making their way up the other direction. Fifteen minutes later, they felt another gigantic jolt — unbeknownst to them, the second tower had been hit, too. Yadoo didn’t reach the ground until 9:15.

He came outside and turned around to witness the chaos above — the fire, the smoke and the gaping holes at the side of the towers — and it was then that he truly understood the magnitude of what was happening.

“I have to admit poor judgment,” said Shlomo. “In my mind, if you asked me the day before if you are going to have fires of 800 degrees Fahrenheit [up] there, [I’d have said the building] wouldn’t last long. Standing on Church Street 300 feet away, I’m analyzing, and I was thinking, ‘Maybe the fire will stop by itself.’” He shook his head. “You lose the right judgment.”

Seeking to help, he argued with a policeman that he was a structural engineer that knew the buildings well, but they insisted he evacuate the area with everyone else. Shortly after, Tower 2 collapsed, causing debris to course through the streets.

He managed to borrow a phone and inform his family he was safe, but he then had to figure out how to get home, as public transportation was completely shut down. “You realize you’re on an island, and there’s nowhere to go,” he recalled.

As the case with so many that day, the only way to make it to his home in East Williston, Long Island was by walking. But rumors percolated amidst the dust-filled madness of an impending attack on the Brooklyn or Manhattan Bridge, so he and a friend headed further north to the Williamsburg Bridge. Near the old Jewish Forward building, he turned around where he had a perfect vantage point of Tower 1. “[I saw] Tower 1 coming down. And this moment, nobody [could] talk. People were speaking in a million languages — Yiddish, Spanish, French — the same thing: ‘Oh my god, what is happening?’ I turned to my friend and said, ‘We are doomed in here. God knows. We are doomed.’”

Yadoo crossed the Williamsburg Bridge into Brooklyn, proceeding to largely follow the J subway line and then Myrtle Avenue. Still in shock and eager to see his family, Yadoo and his friend spent the next several hours walking east across Brooklyn and Queens. “I am saying to myself, ‘Why? What on earth?’ My mind can’t comprehend it. I was worried about the people I work with.”   Yadoo and his friend reached the Jamaica bus station at about 3 o’clock; he later measured the walk to have been about 14 miles. After calling his family on a pay phone, a bus took him the remaining few miles. He reached home to see his relieved family waiting for him.

According to Yadoo, at Port Authority, 37 police officers and 38 civilians lost their lives, and he knew eight of them very well. Among people who attended a meeting with him just a few days prior, eight perished, four of whom he was friends with.

“Sometimes, you think it’s a long, long nightmare,” said Yadoo. “But it was reality. It happened. You know how Christian people determine time by before and after Jesus was born? Well for my life, it is before and after the buildings went down.”

It was Yadoo’s job to help pick up the pieces — literally. Because he knew the ins and outs of the buildings, he spent the following weeks with the rescue teams at Ground Zero.

Upon the first anniversary of that tragic day, Yadoo joined everyone else at the Ground Zero memorial ceremony. But while others sought out their church or synagogue for support afterwards, Yadoo, who currently serves as the president of his Iraqi synagogue Congregation Bene Naharayim in Queens, chose the route familiar only to him. “I figured if I made it out, I wouldn’t dwell on it,” he said. “And if I dwelled on it, I would do it alone.” 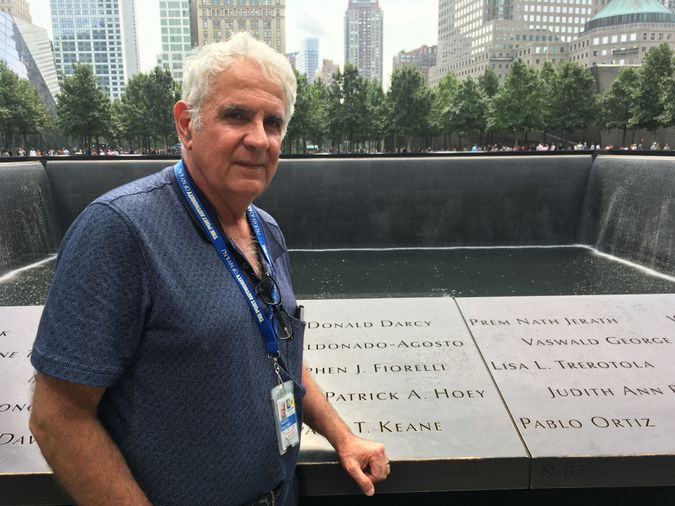 When the ceremony concluded, he changed into shorts and sneakers and traced the same walk from Ground Zero back to Long Island as the year before. Just him, his thoughts, and the memories of his fallen friends.

Every September 11th since, Shlomo has continued this tradition of walking home. A few times, he has had others join him for the walk, including his children one year, but he’s mostly walked it alone. While it can be “boring,” he doesn’t listen to music or anything of that sort. “In the years [since], it becomes more like a statement — I can walk it,” said Shlomo.

Though he always crosses over the Williamsburg Bridge, he often changes up the route while traversing Brooklyn and Queens to see different parts of the city that suffered this tragedy with him. He tends to end around the border of Queens and Nassau County, though he has also walked the full distance to East Williston.

This annual walk on September 11th — corresponding roughly with Rosh Hashanah — serves as Shlomo’s marker for a new year. Every year, the neighborhoods he passes through change a bit more, and his children reach new milestones. “In 2007, my daughter Courtney graduated high school and went to Harvard,” said Shlomo. “My son Jordan graduated, and then my daughter Jenny graduated. My son Roy got married and has three kids now. It’s a time for me to reflect on what happened the year before.”

Shlomo helped oversee the rebuilding of the new World Trade Center complex over the years that followed. His new office is in 4 World Trade Center, across from the memorial and the Freedom Tower. “I can’t relate to this building where I work,” he said. “Especially when you are always looking over the memorial. It is the old buildings that I am emotionally connected to.”

Every day, he takes a mid-day walk around the pools where the original towers were. “I avoid looking at the names engraved, though,” he said, “particularly the ones on the north side of Tower 1. They’re people that I know.”

Shlomo thinks he will retire from the Port Authority soon, so this September 11th might be the last time he will walk home to Long Island.

Though his thoughts are always with those who lost their lives, it only makes him more thankful to see his children grow. Time moves on, and everything changes — even the route he chooses to trek back home. But no matter how long it’s been, with each step he takes on September 11th, the memories remain the same.

Steven Davidson is a freelance journalist who previously worked at the Forward and has written for Narratively and Salon, among other outlets. You can find him on Twitter @sdavidson169.